Jonathan is a patent attorney in Cambridge. Philip Robinson finds out how he helps chemists to protect their work 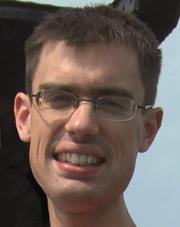 When you look at a door, you probably just see a door. Perhaps an entrance, or a portal if you’re feeling particularly imaginative. But would you see it as a ‘cover positioned by an opening in a wall that can be moved to vary the extent to which it blocks the opening’? Jonathan Wills might. That’s because Jonathan is a patent attorney and, as such, it’s his job to capture the defining points of new inventions in precise detail to help the inventor get a patent.

But the door, of course, isn’t a new invention, and the inventors who come to Jonathan are generally not interested in carpentry. Instead, as a chemistry graduate, Jonathan specialises in working with scientists to get patents for their discoveries. Whether it’s a new drug to cure malaria, a new material for more efficient batteries or a chemical to clean up oil spills, ‘the idea of a patent is that it lets a researcher protect their new and important work,’ Jonathan explains. So when someone has a great new idea or invention, getting a patent makes sure that other people can’t steal it or copy it. Or at least if they do, they’ll be in trouble.

Sounds simple enough, but to write those patents Jonathan needs to have a detailed understanding of the work that’s been done so he can figure out exactly what makes the invention special. And then he must describe, in careful detail, how it works, or how it’s made and why it’s new, brilliant, innovative or better compared to anything else.

So Jonathan really has to know what he’s talking about, which means he relies heavily on his chemistry knowledge. ‘I can’t do this job without being a chemist,’ he says. ‘Everything I’ve learned I’m using day to day. Scientists need someone who can understand the complex research they’re doing to explain it in the patent application.’

From lab to law

After studying for his chemistry degree and a PhD, Jonathan admits that he decided he didn’t want to keep working in the lab, but he still loved chemistry and didn’t want to leave it all behind. Becoming a patent attorney was the perfect opportunity to apply his scientific knowledge outside of the laboratory, while still keeping up to date with science.

Jonathan also explains that although his chemistry degree is essential, it’s just as important for patent attorneys to have excellent communication skills and a cool head. ‘During the application process we ask applicants to describe a simple invention to get an idea of how well they can convey an idea. It’s all about asking them difficult questions to see if they can still work under pressure.’ And for those that have what it takes – there’s still a lot to learn. ‘As a trainee patent attorney, you know all this stuff about science but absolutely nothing about law,’ says Jonathan. ‘So the first four years are all about learning law.’

And even now, as a fully qualified patent attorney and a partner at Mewburn Ellis LLP, the intellectual stimulation Jonathan get from learning new things is still one of the best parts of his job. ‘Next year I’m going out to Japan to meet my clients there, so I’m just about to start Japanese lessons in the next few weeks.’