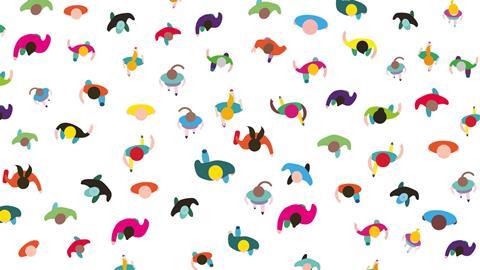 However, the proportion of female undergraduates has not risen by much in the last 10 years. At this rate of progress, undergraduate chemistry ‘will never reach gender parity’, says a new diversity report from the Royal Society of Chemistry (RSC) [pdf].

But gender parity should be an achievable goal – at A-level there are roughly equal numbers of male and female students taking chemistry and there’s little difference in attainment.

The RSC’s report brings together existing data sets to analyse the current state of diversity in the chemical sciences and highlights gender equality as a significant and persistent problem. It shows the drop in the proportion of women through education and then through employment into leadership roles is a particular problem for chemistry compared to other sciences. 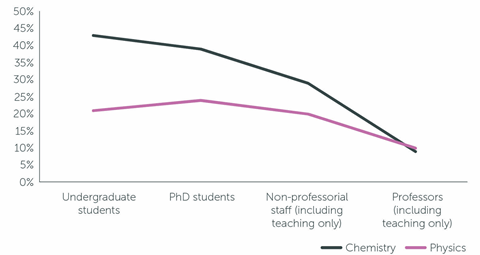 For those who leave academia, a physical science degree does seem to put women in good stead for employment. They’re a little (1–3%) more likely to be in employment a year after study than their male counterparts according to the report. However, only one year after graduation, men earn on average £500 per year more than their female peers.

In academia, the pipeline of women from postgraduate study continues to dry up. Young chemical science students won’t see many senior women around in their departments. In 2015, only 9% of chemistry professors were women, and over 70% of professional and technical support staff in university chemistry departments were male. Additionally, male technical support staff are more likely to have permanent contracts. 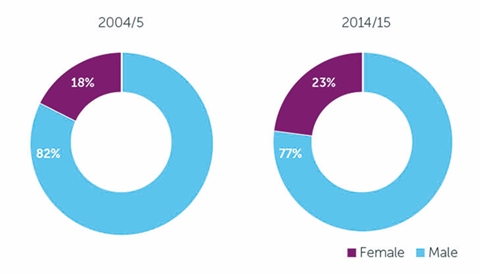 The RSC’s report suggests unsupportive line management is one of the factors that affects access to women’s opportunities in academia. Another is a long-hours culture that is ‘unattractive for many and penalises those with other commitments, disproportionately women’.

However, the report also highlights a need for more data to understand these barriers and causes of inequality. Alejandra Palermo, who leads the RSC’s inclusion and diversity work, says the RSC will ‘investigate retention and progression of women into leadership roles in the chemical sciences as part of a new programme of research’.

‘Gender data has a big limitation in that it’s collected in a binary way,’ Lindsay Harding, senior lecturer at the University of Huddersfield, pointed out speaking at the diversity report’s launch event. ‘Recent surveys show that 0.4 per cent of the UK population don’t identify with binary gender. We need to look at how we gather gender data to be more inclusive.’

More research is one aspect of planned work following the report. Alejandra says the RSC needs to ‘ensure we can accelerate the pace of change’. This will involve setting goals for inclusion and diversity and reviewing ways the RSC works with its community and other organisations. ‘We will also champion the moral case for diversity – everyone should have equal access to fulfil their potential and have a rich career’.