Lost at sea: could you find your way using alchemy? 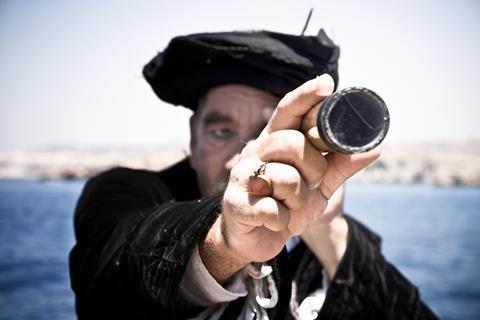 In the 1600s British Navy ships were often getting lost or running aground on rocks because they had no way of reliably knowing where they were. So insurmountable was the problem thought to be that in 1715 the British parliament, through the Board of Longitude, put up a large prize - of the order of ca £3m in today's currency - to anyone who could find a proven way to determine the latitude and longitude at sea. This navigational story has been lively recounted in Dava Sobel's wonderful book Longitude,1,2 which was later made into a film starring Jeremy Irons and Michael Gambon.

The problem with longitude

While latitude can be determined relatively simply from observations of the sun, moon or stars, the longitude was much harder to determine. What was needed was a reliable way of determining the time difference between an agreed reference point (say Greenwich in London) and wherever you happen to be. Once you have the time difference you can get the longitude because each hour difference represents (360/24 =) 15 degrees of longitude. If the ship's time is found to be earlier than Greenwich, the ship is west and if later it must be east of Greenwich.

Many proposals for finding the longitude were suggested, the best of which advanced several areas of science. Some ideas, however, were fairly crazy. Perhaps the strangest of all was the use of the 'Powder of Sympathy' by Sir Kenelm Digby (1603-65). Digby started out as what could be loosely termed a pirate but he had a keen and clever mind and later retired to study alchemy and was a founding member of the Royal Society.

In the film Longitude, Steven Fry plays the eccentric Digby, who claims that his miraculous substance - the Powder of Sympathy - could heal at a distance. The powder was apparently green vitriol or ferrous sulfate, which was ground in a mortar and dried in the sun. According to Digby, in use all one had to do was to sprinkle some of the powder onto an article of clothing that used to belong to the injured person and they would start to heal. Digby goes on to suggest that the Powder of Sympathy could be used to determine longitude.

To quote Sobel on Digby: 'The daft idea to apply Digby's powder to the longitude problem follows naturally enough to the prepared mind: send aboard a wounded dog as a ship sets sail. Leave ashore a trusted individual to dip the dog's bandage into the sympathy solution every day at noon. The dog would perforce yelp in reaction, and thereby provide the captain a time cue. The dog's cry would mean, "The Sun is upon the meridian in London", so allowing the difference in time to be immediately determined giving the longitude'.

No prizes for the Powder of Sympathy

Needless to say the Powder of Sympathy never succeeded in winning the coveted Longitude prize or for that matter any kind of prize or success. One has to remember that this was a time before most people had any kind of science education, and scientific enquiry had not established itself in any disciplined way, and so to many the strange logic of the Powder of Sympathy story might even have sounded feasible. One wonders how many poor dogs suffered in the trials.