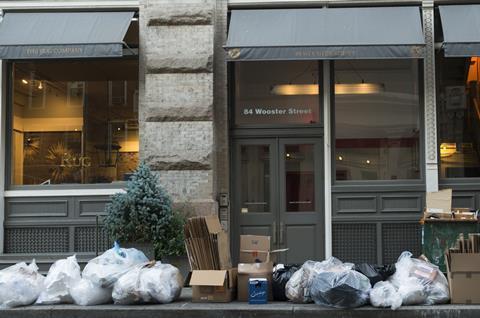 With landfill sites filling fast, the recycling of household waste is becoming increasingly important. So it’s good news that researchers at the BAM Federal Institute for Materials Research and Testing in Berlin have come up with a way of taking your rubbish – plastics, empty cans and packaging materials – and reusing it in the production of concrete for making pavements, roads and buildings.

Concrete is made by mixing cement, water and aggregate. The cement is the material that reacts with water to give an adhesive mixture, and is commonly Portland cement, which comprises a complex mixture of calcium silicates with small amounts of other materials. It is made by roasting clay with limestone (CaCO3); small amounts of calcium sulfate are added to vary the setting time. The aggregate is usually one of two types – fine, eg sand or gravel; or coarse, eg crushed rocks or stone.

Much of our household waste is incinerated, the main product of which is the non-combustible material – ‘bottom ash’ – that is left behind in the furnace. This bottom ash has been used as a coarse aggregate in concrete production, but its use is limited. Impurities in the ash, such as chlorides, sulfides and very small particles make recycling difficult, and small fragments of aluminium and glass cause cracks in the final product.

In an article published in Quarterly Journal of Engineering Geology, the researchers led by Dr Katrin Rübner explain that in the alkaline environment of freshly made concrete aluminium forms Al(OH)3, which can react with calcium ions in alkaline conditions to form Ca3[Al(OH)6]2 as a precipitate, and the resulting overall increase in volume causes cracks in the concrete. A high glass content of about 15 per cent can also lead to damage because glass forms alkali–silicates, which also cause expansion and cracks in the concrete.

To clean up the ash, the researchers tried various additional treatments. They reduced the glass content to half by identifying transparent particles of glass optically and then removing them mechanically. They reduced the aluminium content to less than 0.4 per cent by storage in sodium hydroxide and subsequent washing.

The treatments produced higher quality concrete that was free from defects and had better properties such as workability, strength, elasticity and porosity, making it potentially more useful as a building material.