Probing use of simulations

Many teachers will already be familiar with the PhET series of simulations produced by the University of Colorado. Although the original focus was on physics, there are now a number of simulations targeting chemistry topics. PhET simulations are notable for the fact that they are designed using a research-based approach to target common misconceptions. Moore and co-workers report1 an interesting study that probed students' interactions with a particular chemistry simulation, with the aim of demonstrating the power of implicit scaffolding in promoting student-led learning in a large class setting.

The introduction provides an interesting narrative outlining the pedagogic principles that underpin the PhET series, and illustrates the importance of an inquiry-based approach in shaping the structure of each simulation. By utilising multiple representations, these simulations help students to link different levels of representation in explaining concepts. To maximise their value to learning, the simulations are designed to support inquiry without explicit guidance through the use of implicit scaffolding. This allows students to be guided without feeling guided, and encourages them to proceed at a pace that avoids cognitive overload. 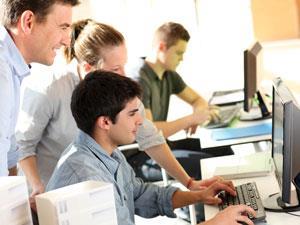 The study involved a class of 80 students studying a general chemistry course at an American university. Students worked in small groups to probe the features of the Molecule Polarity simulation with the brief of playing with the simulation for five or ten minutes to find out how molecular shape relates to polarity. All mouse clicks were monitored across the whole cohort, and each group was given an audio recorder. Several groups were also monitored using screen capture software, which recorded every interaction.

The simulation has 23 features accessible under three tabs named 'Two atoms', 'Three atoms' and 'Real molecules'. These allow users to adjust parameters and observe outcomes, permitting the exploration of a range of phenomena. The research shows that all but three of these features were accessed by a majority of groups, prompting the suggestion that guided-inquiry questions could be posed to direct students towards less-used features.

The analysis of recordings provides a fascinating glimpse of the student perspective, and does support the conclusion that the implicit scaffolding genuinely works. This manifests itself in the approach taken by students in exploring the functionality of the simulation and also in making scientific sense of their observations. Survey data indicated that students found the simulation to be useful for learning, and it was evident that they were engaged in productive, content-rich discussions during the exercise. This should give confidence any teacher who wishes to use these resources to support learning in their own classroom.