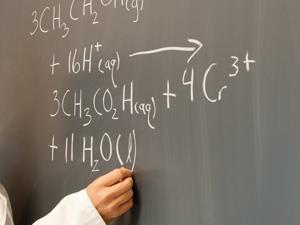 Redox processes are at the heart of many important chemical and biological processes, so it is vital that students develop a robust understanding of the underpinning concepts. Much research investigates the difficulties that students have in getting to grips with oxidation and reduction, largely focusing on the symbolic domain. In this article, Brandriet and Bretz outline the use of their Redox Concept Inventory (ROXCI) in measuring students’ level of understanding of concepts at symbolic and sub-microscopic levels.

Concept inventories are typically multiple choice quizzes designed to identify the extent to which students accurately grasp key concepts in a particular topic. In many cases, students must indicate their level of confidence in their answers, helping to identify the robustness of their understanding/misunderstanding of the concept in question. The article also discusses the issue of meta-ignorance – students who hold misconceptions are often unaware of the fact, and so continue to rely on faulty knowledge in subsequent learning. Identifying students with strongly held misconceptions is useful for teachers, who may be able to plan transformative instructional approaches to assist in breaking down misunderstandings to build a solid grasp of difficult concepts.

In this study, the ROXCI was administered to ~1600 general chemistry students at several US universities. The mean score was ~6 out of 18, with students expressing an average confidence level of ~56%, indicating a significant disconnect between score and confidence level. Analysis provided valuable insight into the nature of students’ misconceptions across a range of challenging redox concepts.

In response to one question, many students suggested that sulfur and sulfate both have a charge and an oxidation number, indicating that they were unable to distinguish these two concepts. Similarly, many students believed that oxidation occurred when NO3– was converted to NO2 and that reduction occurred when H+ was converted to H2O, due to changes in the charges. Another interesting issue related to a question on the displacement reaction between Fe and CdSO4. Students overwhelmingly suggested that electrons were transferred when the bond between Cd2+ and SO42– was broken and the bond between SO42– and Fe2+ was made, despite the state symbols indicating that the ions were in solution, and therefore not bonded to each other. It is suggested that teachers address this latter misconception by including discussion about which particles collide and how electrons are transferred, bridging the gap between symbolic and sub-microscopic domains. These latter suggestions show that research tools can be useful to teachers in identifying and challenging misconceptions which present a barrier to learning.