Neon is the fifth most common element in the universe, and is formed by helium and oxygen nuclei fusing. It is found both in our atmosphere and in Jupiter's. On Earth it is found in tiny quantities in the air (18 ppm), sea water (0.2 ppm), and in the crust (70 ppt). To find any in the crust is unexpected for a noble gas, but in 1909 the French geologist Armand Gautie collected gas bubbling up from fumaroles near Vesuvius and hot springs near Naples, that contained neon.

Neon has three naturally occurring isotopes: neon-20 (90.5%), neon-21 (0.3%), and neon-22 (9.2%). The ratio of these trapped in minerals of the Earth's crust varies. For example, neon trapped in granite contains relatively more of the heavier isotopes neon-21 and neon-22. However, neon trapped in diamonds, and emitted by volcanoes, is mainly neon-20. These variations have yet to be explained.

Neon was important in proving the existence of isotopes. In 1912, Frederick Soddy suggested isotopes as the only way to explain the products of radioactive decay. A year later the British physicist J J Thompson found proof of their existence. He observed that a stream of neon atoms exposed to a magnetic field gave two beams, and concluded that some neon atoms were heavier than others. 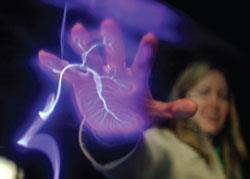 In 1898, at University College London (UCL), William Ramsay and Morris Travers were looking for a lighter gas that would fill a gap above argon in the periodic table. They allowed solid argon, surrounded by liquid air, to evaporate slowly under reduced pressure and collected the gas that came off first. When they put a sample into their atomic spectrometer, its spectrum immediately confirmed it as a new element. They were amazed by its brilliant red light.

Today, neon is extracted from liquid air by fractional distillation and it comes off as a gas mixed with traces of helium, which are removed by absorption onto activated charcoal. Only a few tonnes of neon are produced to meet commercial needs each year, although more could be produced as there are 65 billion tonnes of it circling this planet.

Most neon is used to make illuminated signs because of the intensity of its colour. It is ideal for beacon lights because they will shine through fog. The first neon sign was made by Georges Claude in 1910, and demonstrated in Paris. They are ideal for advertising, are quite robust and can last for up to 20 years.

There are other uses for neon, such as in diving equipment, lasers, high-voltage switching gear, and as a refrigerant for very low temperatures. While liquid neon cannot achieve the temperature of liquid helium (-269°C), it can maintain a temperature of -246°C. It has many times the refrigerant capacity of helium, but it is much more expensive, so very little is used in this way.

Neon is unreactive towards all known chemicals. However, in the rarified atmosphere of a gas discharge tube, species such as NeH+ and other ions of transient existence have been observed.

Plasma globes contain neon. The dramatic effect of these was discovered by Bill Parker at the Massachusetts Institute of Technology in 1971. It happened when neon gas escaped into a test chamber and came under the influence of a high voltage. Suddenly coloured streams of light filled the chamber as the neon's electrons were excited to high energy orbitals. Despite the high voltages involved, the globes are safe to touch.