A demonstration with a dramatic colour change

Nothing tends to imprint chemical facts upon the mind so much as the exhibition of interesting experiments - Samuel Parkes, 1816 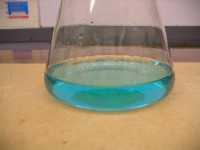 There are many ways of introducing reversible reactions, eg heating hydrated salts such as copper sulfate or cobalt chloride. Reactions in solution involving potassium dichromate or bismuth trichloride are normally controlled by pH, and an example of a simple reversible gas reaction involves copper sulfate with hydrogen chloride and ammonia. For this demonstration, I have developed this simple gas reaction by scaling it up and introducing a more dramatic colour change.

When concentrated hydrochloric acid is added to a very dilute solution of copper sulfate, the pale blue solution slowly turns yellow-green on the formation of a copper chloride complex. When concentrated ammonia solution is added, copious quantities of white smoke are produced, heat is generated and the yellow-green complex turns into a very dark blue copper ammonia complex. The reaction can then be reversed by adding more acid. 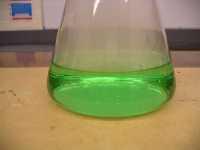 Pour the copper sulfate solution into the conical flask. Slowly add the acid down the side of the flask and swirl vigorously. Carefully add the ammonia in the same way but initially without swirling. Wait and show the students the colour change. Continue to add the ammonia with gentle swirling as the colour eventually changes to dark blue. Reverse the reaction by adding acid in a similar fashion to the ammonia.

Small amounts of dilute copper sulfate solution can be flushed down a sink with a large quantity of water, unless local rules prohibit this. Ammonia contact with the eyes can cause serious, long-term damage. The solution is corrosive and on contact with skin may cause burns. Concentrated solutions can give off dangerous amounts of ammonia vapour. This presents a significant hazard if inhaled. Hydrochloric acid contact with the eyes or skin can cause serious, permanent damage. Concentrated solutions of this acid are extremely corrosive. It is toxic by inhalation - the concentrated solution releases dangerous quantities of hydrogen chloride vapour. Both ammonia and hydrochloric acid should be diluted before disposal down a sink. 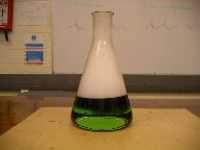 You must be very careful when you add the acid to the ammonia because very large quantities of ammonium chloride smoke are produced which quickly fill the room. I tend to stand near an open window or fume cupboard to provide the smoke with an escape route. Although a great deal of heat is generated, this has never been a problem. I point the mouth of the flask away from myself and the students and, though I have never had the solution spit out, this is a simple precaution. The trick with this demonstration is doing it on a large enough scale for the whole class to see clearly. You must allow the white smoke to escape and not distract from the colour change, and swirl the flask when necessary to produce a homogenous mixture. It is possible to produce a mixed solution with the yellow-green complex on the bottom, the dark blue complex on the top, and with the pale blue copper hydroxide precipitate at the interface of the two layers. 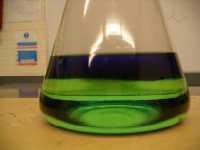 This demonstration can be used as an introduction to reversible reactions for ages 14-16, equilibrium at post-16, and as an example of entropy changes in solution. However, it is best used as an opening for complex chemistry.1 A complex ion has a metal ion at its centre with several other molecules or ions surrounding it. These can be considered to be attached to the central ion by coordinate (dative covalent) bonds. These molecules or ions are called ligands and all have the same common feature: a pair of non-bonding (lone pair) electrons. By donating a pair of electrons, ligands act as Lewis bases.

The empty 4s and 4p orbitals are used to accept a lone pair of electrons from each chloride ion. In this case, the coordination number of the copper changes from six to four. When concentrated ammonia is added, further ligand exchange occurs: 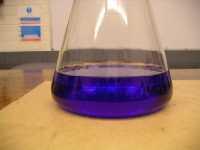 Copper can have coordination numbers of four, five and six, though the shape is often described as square-planar. However, the distinction between square-planar and tetragonally-distorted octahedral coordination is not easily made. (You will have to refer to advanced texts on the Jahn-Teller effect to explain.) The usual result is an elongation of the octahedron (four + two) coordination with complete loss of the axial ligands resulting in square-planar complexes. This is the normally accepted structure for tetrammines. These are relatively easily to prepare and isolate. Hexammines can be made from liquid ammonia and stored in an atmosphere of ammonia. Six coordination is normally more easily achieved using chelates such as edta.

Depending on the cation, [CuCl4]2- displays structures ranging from square-planar (NH4+) to almost tetrahedral (Cs+), the former being usually green and the latter orange in colour.