Mixing hydrogen peroxide with blood to produce a foam explosive

The chemistry of liquid explosives became more widely understood, following the unsuccessful terrorist plot to blow up planes flying between the UK and the US in 2006. Intelligence sources named triacetone triperoxide (TATP) as a possible terrorist explosive because it could be made by mixing hydrogen peroxide with other household chemicals.

The reaction between hydrogen peroxide and blood

In this demonstration I mix hydrogen peroxide with blood to produce a foam rather than a liquid explosive. 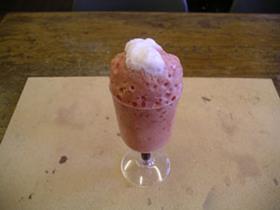 Pour both liquids simultaneously into the champagne glass.

Both the hydrogen peroxide and the blood must be fresh. Ask your local butcher for the blood.

Peroxides are compounds in which there is an oxygen-oxygen single bond. Oxygen atoms stick together in pairs to form oxygen gas, O2, and in threes to make ozone, O3, but do not form longer chains, as sulfur does so readily.

This is a simple experiment with which to introduce catalysis. The blood contains the enzyme catalase which on mixing with hydrogen peroxide catalyses its breakdown into water and oxygen via the disproportionation reaction:

Hydrogen peroxide is a powerful oxidising agent but is unusual in that it can act as reducing agent under certain conditions. The oxidation number of oxygen in hydrogen peroxide is -1, intermediate between 0 in oxygen and -2 in water, and this allows the oxygen to act as both a reductant and oxidant in either acid (H2 O2) or alkali (HO2-) solution.