Soap from bacon - the dangers of alkaline solutions

Demonstrations to capture the student's imagination, by Adrian Guy of Blundell's School. In this issue: Soap from bacon - the dangers of alkaline solutions

In this demonstration raw bacon is used to show the effects of acid and alkali on living tissue, and also the formation of soap from hydrolysed fat.

Hydrolysis of fats and muscle

The first part of this demonstration involves hydrolysing the ester linkages in the fats and separating the fatty acids from the propane-1,2,3-triol. Under basic conditions this reaction is known as saponification. Muscle tissue comprises mainly proteins, which themselves are derived from amino acids linked together by peptide links (-CO-NH-). These peptide links, like the ester links in fats, undergo hydrolysis, forming the constituent amino acids. 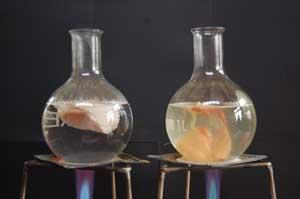 Part one - hydrolysis of bacon fats and proteins. Put one of the rashers of raw bacon into 500 ml of boiling 2 M sodium hydroxide, and the other into 500 ml of boiling 2 M hydrochloric acid. Within minutes the bacon rasher (flesh and fat) in the alkaline solution will hydrolyse, forming a murky yellow solution of propane-1,2,3-triol, and the sodium salts of the fatty acids and amino acids produced from the hydrolysis of fat and muscle protein. In the hot acid only the fat of the bacon is hydrolysed, leaving the muscle tissue reasonably intact.

Part two - precipitating the sodium salts of the fatty acids as soap . When the bacon has completely hydrolysed in the alkaline solution, and while the solution is still hot, add 50 g of sodium chloride to the beaker and stir. Put the beaker in a safe place to cool for ca one hour. The soap will precipitate out of solution. 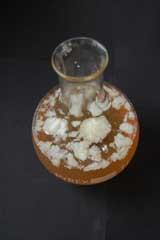 At Key Stage 3 this is an excellent demonstration to use when introducing year 7 students to lab safety. In particular, the demonstration shows the dangers of acids and alkalis and can be used to start a discussion on the dangers these chemicals pose to living tissue (eyes and skin especially), and the need for eye protection, gloves and extra care when dealing with alkalis - especially when hot.

Year 13 students study the hydrolysis of esters from an equilibrium viewpoint. Under acid conditions the following equilibrium is established:

Under alkaline conditions the resulting carboxylic acid is removed as a sodium salt, forcing the equilibrium to the right-hand side and the reaction to completion:

The difference in the rates of hydrolysis under these two conditions can be seen in this demonstration - the bacon fat hydrolyses much faster under alkaline conditions.

Hot 2 M sodium hydroxide is corrosive and can cause severe burns. Hot 2 M hydrochloric acid is an irritant. Wear eye protection and gloves. The soap produced by this method is caustic and must not be used. Carefully dispose of the waste products down a sink with plenty of cold water.