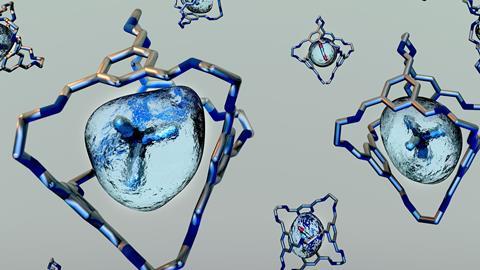 A fluid idea, with holes

A decade ago chemist Stuart James from Queen’s University Belfast published a counterintuitive idea. He stated it should be possible – and indeed was desirable – to make liquids containing permanent holes, a characteristic normally only associated with solids.

Stuart had already made a name for himself synthesising highly porous solids known as metal–organic frameworks, or MOFs. These solids have huge internal surfaces reaching up to 1.5 football pitches per gram. The holes within MOF structures act as reservoirs for storing other molecules and are even able to hold gas molecules much closer together than they would be in the gas phase. Gas storage – for example, greenhouse gas capture – is therefore the top commercial application for MOFs. But these solids have only hit the market in the past year, and have yet to reach their true potential. Other uses still under development include in gas purification and separation – for example, to remove harmful contaminants – as well as in catalysis and as sensors. 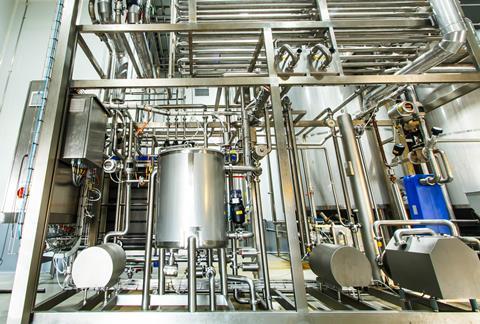 Porous liquids could be pumped around chemical plants, absorbing molecules in one place and releasing them in another, to reduce the need for human intervention in industrial processes

But Stuart’s colleague, chemical engineer David Rooney, felt there was a way to make porous solids even more useful, especially for the chemical industry: turn them into liquids. ‘Chemical engineers like continuous processes that don’t require any intervention from anybody,’ explains Stuart. David envisaged porous solids dispersed into liquids so they could be pumped through tubes around chemical plants, with molecules absorbed in one place and released in another. And as a means to separate mixtures of gases as they flow through pipes; without the need to keep replacing cartridges containing solids that can absorb them.

Microporous solids, such as zeolites and MOFs, contain a vast network of pores up to 2 nm in diameter. A porous liquid was defined, by Stuart in 2007, as a liquid phase containing permanent empty spaces. ‘All liquids have a degree of porosity,’ he explains, ‘because the molecules don’t fit perfectly together and are continually tumbling over each other, leading to transient pores between the molecules.’ As well as being short lasting, these pores are very small.

In contrast, a porous liquid should demonstrate the same type of porosity seen in zeolites and MOFs. ‘You need much larger pores, at least the size of a molecule. They have to have well-defined shapes, and they have to be permanent,’ Stuart says. The pores also need to be empty. Keeping the holes unoccupied, particularly of solvent, has proven to be a particularly difficult task.

A decade after laying out their concept, successful syntheses of a handful of porous liquids have now been published and, for some of these, their gas storage capabilities proven.

In early 2014, seven years on from defining his concept, Stuart published the first attempt at what he calls a ‘type 1 porous liquid’. Porous liquids of this type are neat liquids: instead of pores between the molecules you have a permanent pore inside each molecule that makes up the liquid.

Cage-like organic molecules with empty cavities, able to hold other molecules inside them, were already known in the solid phase. ‘The idea was to take an organic or inorganic host, with a cavity inside it, and try to render it liquid,’ explains Stuart. By minimising the weak intermolecular forces that pack molecules together, the melting points of cage molecules can be lowered. But the challenges of adapting them sufficiently to make them liquid at useful temperatures, while retaining their porosity, are substantial.

Stuart’s research group decided to add alkyl chains to the outside of an organic cage molecule, a typical trick for reducing molecules’ melting points. However, the ends of the tails poked inside the cavities, reducing their size. ‘It is a trade off between how long the tail can be and how far you can bring down the melting point,’ explains Stuart. The chemists finally settled on short pentyl chains for the tails to retain the porosity, but this didn’t bring the melting point down low enough for the porous liquid to be useful.

Stuart – in collaboration with Andrew Cooper from the University of Liverpool – then switched his attention to type 2 porous liquids. These are empty host molecules containing permanent pores as per type 1, but this time they are dissolved in solvent. This gets around the need for the molecules to melt, but dissolving them is still far from simple.

In 2015, Stuart and Andrew published the first two examples of these type 2 porous liquids in the journal Nature. ‘These were the first really convincing porous liquids that we managed to make,’ says Stuart. The solvents they chose were bulky crown ethers – ring molecules containing several ether groups – and bulky chlorinated solvents. To boost the solubility of the cage compounds, the team decorated each cage molecule with crown ether groups.

The resulting concentrated solutions were liquid at room temperature. Spectroscopic measurements in collaboration with molecular modelling showed the pores could hold significant amounts of methane. The uptake of gases in these porous liquids is, however, currently much lower than those in most zeolites and MOFs.

Striving to broaden the scope of these new materials, Stuart and Andrew have been exploring a third type of porous liquid. These are comprised of particles of a microporous solid dispersed in solvent. ’We have been taking known porous solids, such as zeolites and MOFs, and dispersing them into a liquid phase’, explains Stuart. Again, a solvent that will not fit inside the pores of the molecules is needed. ‘It is also a challenge to make a stable dispersion, that doesn’t just precipitate or sediment out.’ The scientists have found success with this approach but, because the work has only been patented rather than published so far, little is publically available about this newest form of porous liquid. 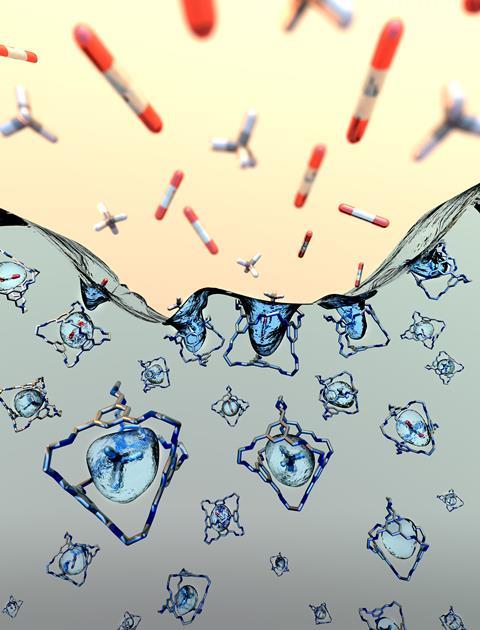 ‘It’s still early days for this type of porous liquid, but you can imagine potentially dispersing loads of different porous solids in this way,’ says Rebecca Greenaway, a postdoctoral researcher in Andrew’s group. ‘The type 3 porous liquids are where I personally would say more commercially viable porous liquids will arise in the future.’

Stuart and Andrew’s groups might be the pioneers, but they are not the only researchers striving towards novel porous liquids. Sheng Dai at Oak Ridge National Laboratory in the US has developed a twist on a type 1 porous liquid: a neat liquid containing empty colloidal spheres, rather than molecules with empty cavities. A version with hollow silica spheres was published in late 2014, and a hollow carbon sphere version was reported in October 2017. These porous liquids are both fluids at room temperature.

‘We’re using nanotechnology to make porous liquids,’ explains Sheng. The surfaces of the hollow spheres are decorated with positively charged ligands, so the spheres repel each other. ‘This repulsive force is one of the driving forces to liquefy these hollow spheres.’

These porous liquids have many more pores per cubic centimetre than any others published so far, Sheng adds. ‘The porosity is approaching that of the solid versions, for example zeolites. In some cases it’s even bigger than zeolites.’

However, there are no windows to allow molecules in and out of the pores, as per Stuart and Andrew’s designs, so how are these pores useful? The secret is the skin of the hollow spheres, which is porous and lets gas in and out. Both the silica and carbon-based porous liquids were shown to take up gases in volumes equivalent to solid porous materials.

For the silica spheres, Sheng also demonstrated gas selectivity. When exposed to a mixture of carbon dioxide and nitrogen, only the carbon dioxide molecules went into the silica spheres. The positively charged ligands on the sphere act like ‘gatekeepers’ only letting in certain molecules, he explains. Sheng thinks this nanotechnology approach could potentially be used to design a wide variety of different porous liquid materials.

October 2017 also saw the publication of another twist of a type 1 porous liquid: the first liquid MOF. Thomas Bennett from the University of Cambridge, UK, and François-Xavier Coudert from the CNRS Institute of Chemistry in Paris, France, presented a framework of metal ions and organic ligands that retains its porosity when melted. Technically it isn’t a true porous liquid, at least by the definition set by Stuart in 2007, because although the MOF retains its porosity when melted, its cavities are transient rather than permanent. The organic ligands are constantly associating and disassociating with the metal ions.

The MOF also melts at just over 590°C, a long way off the ambient temperature that Stuart and Andrew are aiming to make porous materials liquid. But it should be possible to reduce the melting point of the MOF using additives. ‘The melting temperature of silica glass is lowered by adding sodium oxide and by introducing defects,’ says Thomas, ‘so I think this could be a really interesting route to study.’

Even without doing that, liquid MOFs could offer an easy way to cast MOFs into new shapes in the same way metals are cast. ‘Shaping a MOF is extraordinarily difficult,’ says Thomas. ‘What motivates me is trying to move the MOF field forward from just focusing on crystalline systems to producing exotic MOF-based materials.’

Now the concept of three types of porous liquid has been proven, Stuart and Andrew’s collaboration is hard at work developing the next generation of porous liquids. We have now significantly improved the number of cavities in the liquid, and therefore the amount of gas that can be taken up, says Stuart. ‘We also know we can get a gas out again without using a lot of energy. This is work we haven’t published yet.’

But for porous liquids to reach their full potential, a number of challenges still need to be overcome, explains Rebecca. This includes being able to make porous liquids non-volatile. ‘A porous liquid with lower volatility, ideally zero volatility, would allow pressure or temperature swings for gas uptake and release,’ she explains. Porous liquid synthesis also needs to be cheaper and more easily scaled up to improve their commercial viability.

And it isn’t just gas storage, gas transport and gas separation that the chemists are exploring as applications for their porous liquids. ‘Porous liquids might have other possible applications,’ says Rebecca. ‘They might have unique properties for homogenous catalysis by providing reaction selectivity through confinement, and accelerate the rates of reactions involving gases, perhaps even allowing the reactions to be carried out at lower pressures.’

Stuart also predicts their potential use in sweetening natural gas – the removal of problematic levels of carbon dioxide from natural gas drawn from reserves. Porous liquids could be used as more efficient, drop-in replacements for current amine or ether-based technology, without the need to change any of the existing infrastructures, he explains. ‘More broadly,’ says Andrew, ‘porous liquids could define a new class of solvent that can perform fundamentally new tasks.’

There is a lot of work to be done before porous liquids can open up these possibilities, but the researchers are sure their future is bright. Stuart and Andrew recently co-founded a company, Porous Liquid Technologies, in collaboration with Queen’s University Belfast, aiming to take both their type 2 and type 3 porous liquids to market. ‘It’s quite possible that we will see commercial applications within five years,’ says Stuart. And his new company is hoping to be the first to achieve this.

Nina Notman is a freelance science writer and editor specialising in chemistry.