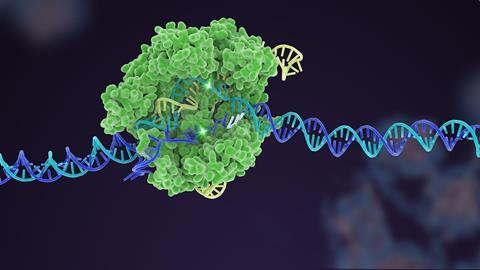 In November 2016, a letter landed on the desk of the new president-elect Donald Trump. It was from his predecessor’s team of scientific advisors urging him to establish a defence strategy against so-called biothreats. The letter warned of something called CRISPR. Meanwhile, celebrity gossip columns were abuzz with news of Jennifer Lopez’s new project for NBC – a scientific crime drama going by the same, mysterious acronym.

So what is CRISPR and what has it done to deserve the attention of the president and the Hollywood press? Pronounced ‘crisper’, it stands for Clustered Regularly Interspaced Short Palindromic Repeat, and is a type of DNA sequence with a recognisable signature that’s found in bacteria and archaea. It’s involved in their defence against invaders such as viruses – in short, CRISPR is a bacterial immune system. Not exactly something you’d think Trump or JLo ought to be concerned about. Except this immune system works by deploying molecules that snip up parts of the attacker’s DNA, a system now repurposed by molecular biologists to introduce targeted changes into any genome, including the human genome. As such, CRISPR has become the go-to method for gene editing.

The Trump letter hints at the possibility of these types of cutting-edge technologies being misused. It suggests CRISPR could, for example, be used to spread human infections capable of altering the very way our cells work. All sorts of grisly consequences spring to mind. But instead of skipping straight to the inevitable zombie apocalypse, let’s look at CRISPR a little more carefully. Scare stories aside, CRISPR is regarded as one of the biomedical breakthroughs of the century and promises treatments for everything from genetic diseases like sickle cell anaemia to HIV and cancer, through the editing and correction of disease-related genes. ‘For scientists, it’s a pretty easy technique and it’s already been adopted by hundreds of labs everywhere,’ says Megan Hochstrasser, a biochemist who until recently worked on CRISPR systems at the University of California, Berkeley, where some of the pioneering work on CRISPR-based gene editing was done. 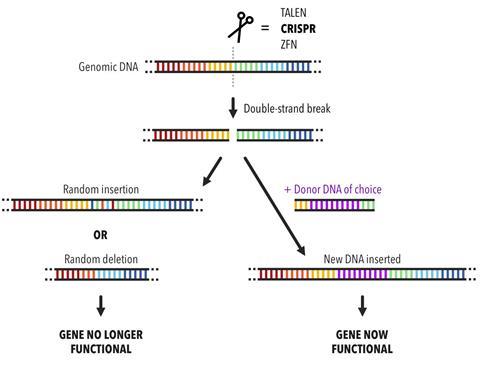 The gene editing process, highlighting how scientists can use CRISPR to engineer DNA

The potential of CRISPR becomes apparent when you start to understand the finer details of the natural immune system. In bacteria, CRISPR encodes immunity against viruses that infect bacterial cells, called phage. A CRISPR sequence consists of remnant phage DNA from a previous infection that has become etched, like a molecular memory, into the cell’s DNA. If descendants of these phage ever return, the cell is then able to ‘remember’ and destroy them. It does this by matching its own CRISPR sequence to the corresponding sequence in the phage and sending in the protein equivalent of a pair of scissors to chop it up. ‘If the DNA gets cut, the virus can’t replicate and the cell is safe,’ explains Megan. ‘Scientists have co-opted this and thought, “Ok, so we now have a programmable way to cut anywhere. Let’s cut somewhere in the human genome or the plant genome. Let’s use this for genome engineering.”’

The two key components of the CRISPR system are the scissors – nuclease proteins capable of making double-stranded breaks in the DNA helix – and CRISPR-encoded RNA molecules that find their own matches in the phage DNA and act as guides for the scissors. In the simplest CRISPR system, the cutting machinery consists of just one protein, a nuclease called CRISPR-Associated Protein 9, or Cas9 for short. One of the foundational papers on the CRISPR/Cas9 system was published by a team of UC Berkeley scientists back in 2012. Megan recalls being a graduate student at Berkeley when lead author Martin Jinek was pacing the corridors about that paper. She says that at the time she didn’t appreciate the magnitude of their work, which showed how the system could be reprogrammed to target and cut at any given DNA sequence. ‘I didn’t know what [Martin] was doing or why he was so stressed out but once he gave a group meeting everyone was pretty excited,’ says Megan. ‘And then it just got more crazy after that.’ The paper also showed how Cas9’s RNA guide could be stripped down to its bare essentials, creating a synthetic CRISPR/Cas9 system that would become a nifty tool for gene editing.

What makes this system so attractive to disease researchers is that it provides an easy way to knock out disease-causing genes in human cells or create space to introduce healthy ones, as long as you know the sequence that you want to cut. Sure, there are other gene-editing approaches, but this one is precise, very straightforward and fast. Plus, because it cuts double-stranded DNA, it can take out both copies of a gene that are present in a cell, unlike other editing techniques that only take out one. You can even pick up CRISPR ‘kits’ on the internet for a couple of grand, which may be what has sparked concern about the technology falling into the wrong hands. Megan agrees it’s a ‘legitimate risk’, which people – or, at least, the government – should be thinking about, although she’s not convinced it’s enabling terrorists to do anything they couldn’t do before. It might just help them do it a bit faster.

Megan is now a science communicator for the Innovative Genomics Initiative (IGI), a group of US-based labs involved in applying CRISPR gene-editing research to solve real-world problems. The plan is eventually to move into new areas like agriculture, where gene-editing could be used to make improvements in the genomes of crop plants. Currently, the advances are mostly medical: in October 2016, scientists at IGI and collaborators published a paper in Science Translational Medicine highlighting the potential for tackling sickle cell disease – an inherited condition that can cause severe anaemia – using CRISPR/Cas9-edited stem cells. As Megan explains, the advantage of their approach is that the editing happens in the patient’s own cells but outside of their body. This gets around the problem of delivering the editing molecules to a particular cell type, in this case blood cells. ‘That’s been a huge challenge in trying to get CRISPR to work,’ says Megan. ‘It’s not easy to get proteins or RNA wherever it is you’re trying to deliver it – to just the brain, for example, or muscle cells, or the heart or the liver. So this approach is much easier because you can get people’s stem cells out and then put them back (…) and you avoid the complication of adding some foreign substance that could trigger an immune response.’ So far, though, the team has only transferred the edited stem cells into mice, not humans. 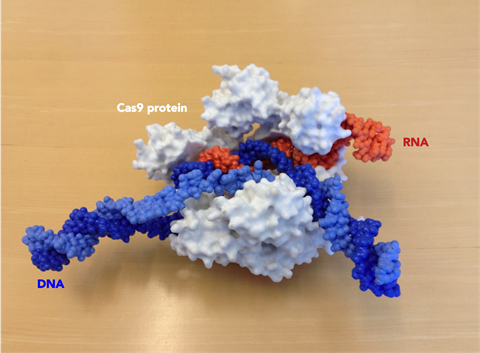 Other hurdles for CRISPR-based gene editing include introducing new stretches of code, rather than simply cutting up existing bits, and making sure the edits only occur in the right genes. Often, the ‘wrong’ genes end up getting slashed as well, because they have similar sequences. When this happens it’s referred to as ‘off-target damage’. It’s like if you run a Find and Replace command in a word processing program on your computer with the intention of replacing every instance of ‘cat’ with ‘dog’, only for the program to make a load of extra replacements that you weren’t expecting, resulting in the unwanted appearance of ‘dogologues’ and ‘dogalysis’. The CRISPR system can also include the odd mismatch, so in the cat/dog example it might have matched rat as well as cat and changed an underrate to an underdoge. Switch the letters for the bases making up the genetic code and it’s easy to see how these off-target effects could wreak havoc in the human genome if left unchecked.

For this reason, among others, CRISPR isn’t at a stage yet where it could be reliably used to edit out diseases in viable human embryos. When, in 2015, researchers in China tried to edit the genomes of non-viable embryos collected from fertility clinics, their experiments resulted in a lot of off-target damage. This doesn’t mean embryo editing is completely off the table, however. Megan thinks it’s something that will eventually be approved, but needs to be done carefully and with proper consideration of the ethical implications, such as what it means to live with edits in your DNA that you didn’t consent to and that you will pass on to your children.

And there are ways to minimise off-target damage. Bill Skarnes and his team at the Wellcome Trust Sanger Institute (WTSI) in Cambridge, UK, for example, have been focusing on using an open-source database developed to support CRISPR/Cas9 gene editing. This database helps the user to decide which might be the best CRISPR target site for their experiments by displaying information about off-target damage for each potential site. ‘You’d look up the [gene] in which you want to make the change and you can visualise that and see all the possible CRISPR sites that could be useful for your experiment,’ Bill explains. ‘Then you can click on those sites and you can evaluate their off-target potential.’ Specifically, the tool tells the user how many potential target sites there are in the genome with zero mismatches – supposedly causing no off-target damage – and how many there are with one mismatch, with two mismatches and so on. In this way, it’s possible to design editing schemes that minimise collateral damage.

Perhaps the greatest challenge for CRISPR researchers, though, is knowing which genes do what in a particular disease, in order to be able to change the ones causing the problems. The sickle cell gene is well known and, crucially, it’s just one gene, whereas other, more complex diseases may have multiple genetic components – not all of which are known – as well as non-genetic causes. The solution to this is more basic disease research, but here CRISPR can help too. Using the CRISPR/Cas9 system, researchers are developing ways to test the functions of lots of different genes at the same time by snipping hundreds or thousands of different sequences in parallel. Bill is currently involved in a high-throughput project knocking out genes for around 100 proteins involved in DNA repair pathways to see what happens in cells that have these mutations. This is particularly relevant to cancer research because cancer cells also have very abnormal DNA repair pathways.

One of IGI’s labs is taking a similar approach with HIV, using CRISPR/Cas9 editing to knock out genes that may be involved somehow in the body’s defence against the disease. This could, for instance, be T cells or another aspect of the human immune system. ‘You’re basically putting cells in one of these big plates where there are really tiny holes with cells in each one. You add Cas9 and different guide RNAs to each one of those and then you should have some sort of read-out,’ explains Megan. ‘So in this case they were looking to see which cells could be infected by HIV.’ In doing this, the team hopes to discover edits that make immune cells resistant to HIV so they can be used to fend off the virus in patients. Just like with conventional drugs, bacteria or viruses could evolve ways to get around the edits, but theoretically it should be possible to keep up with them by regular sequencing and screening for new resistance mutations.

What about the risks though? Wouldn’t it also be possible to edit pathogens to create some sort of all-powerful super-virus? Perhaps, but for Megan the unique concern with this technology is an infection of CRISPR itself – one that could edit people’s DNA when it infected their cells. ‘It’s hard to think about how you would combat something like that if it happened,’ she says. ‘There are CRISPR inhibitor proteins some viruses make that shut down CRISPR systems, so maybe we could co-opt that and give people anti-CRISPRs… I don’t know. Maybe we’ll see when the Jennifer Lopez show comes out!’

Hayley Bennett is a science writer based in Bristol, UK