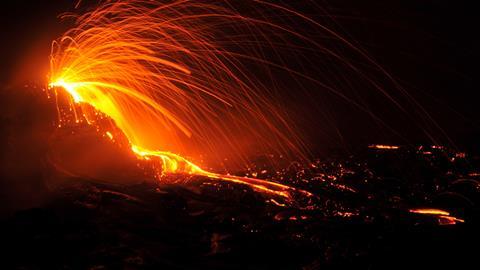 Forget mixing bicarb and vinegar, let’s get into the drama of real volcanoes

You may have made your own volcanoes in the classroom, mixing bicarbonate of soda and vinegar in a plastic bottle and watching the carbon dioxide bubbles froth out at a faintly disappointing rate.

The chemistry of real volcanoes is far more exciting, although carbon dioxide still plays a key role. If you are brave enough to stand at the edge of a volcanic crater, you may be overwhelmed by the stench of rotten eggs (hydrogen sulfide gas). Acidic hydrogen chloride and hydrogen fluoride gases have been known to take the surface off researchers’ glasses, while toxic mercury and carbon monoxide also seep out.

Despite the dangers scientists from all disciplines remain fascinated by volcanoes. While chemists may focus on gases, biologists on volcanic ash’s nourishing elements, and geologists on rock movements, all their work overlaps in a unique way.

While scientists from many disciplines study volcanoes, chemists focus on the gases. This article puts into context the study of activity of a volcano, examining magma and silica, and forecasting. With input from earth science and volcanology, this article offers a starting point for discussion of gases and polymerisation.

It all starts deep within the Earth, where staggeringly high temperatures (more than 1300 ℃) and crushing pressures create a mixture of molten rock, gases and crystals called magma.

Earth is divided into three layers, each with a different composition, like a giant Scotch egg. At its heart is a hot, partially molten and iron-rich core, surrounded by a thick mantle, then a crust that provides the surface that we live on. Most of the mantle and crust are solid but magma is found in areas of the lower crust and the upper mantle.

During an eruption, magma makes its way to the surface, where, if it erupts quietly, it is labelled as lava. Deep down, the high-pressure environment forces gases to dissolve in the magma but as it rises, the falling pressure allows gas bubbles to escape.

Tamsin Mather, professor of earth sciences at the University of Oxford, likens the process to opening a can of fizzy drink and hearing a ‘pppssch’ as gas escapes: ‘The carbon dioxide was forced to dissolve in the sugary liquid. When you open the can and reduce the pressure, the carbon dioxide forms bubbles and starts to come out of solution.’

Jenni Barclay, professor of volcanology at the University of East Anglia explains that as the gas comes out of solution it needs room to expand: ‘The gas comes out and starts to create a huge space problem for the magma, causing it to accelerate and move up.’ 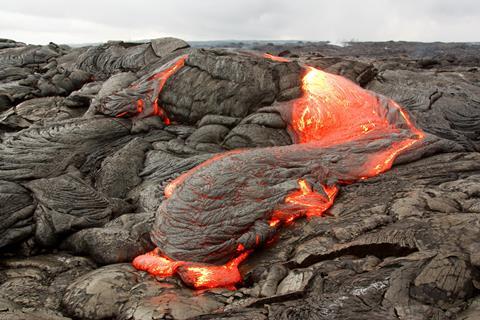 Magma contains many elements, but oxygen and silicon are the most abundant. These combine to form silica, which forms long polymer chains.

Geochemists and geologists define different types of magma by their silica content. After eruption, silica-rich magma cools to give pale rocks such as rhyolite. Meanwhile, low-silica magma gives rocks such as basalt. Rich in iron, basalt has a dark grey/black colour and comprises over 90% of all volcanic rocks.

Tamsin explains: ‘Polymerisation is the reason that some lavas flow less easily than others and part of the reason why some magmas are more explosive.’ This resistance to flow is known as viscosity, with lava being on average 100,000 times more viscous than water.

Most magma contains 50–80% silica. Silica-rich magmas have higher levels of polymerisation and are more viscous, making it harder for gas bubbles to escape (to see how this works, try blowing bubbles into a glass of honey until it ‘erupts’ and compare with blowing into water). Trapped gas builds up until an explosive eruption releases the stress, throwing ash high into the air. The magma that flies out can solidify to form rocks full of gas holes.

Low-silica magmas are relatively runny, allowing water vapour and gases to escape and giving less explosive eruptions. The lava flows easily, solidifying to create a low, rounded shape that resembles a warrior’s shield. Many of the largest volcanoes, including all those in Hawaii, are classified as ‘shield’ volcanoes. 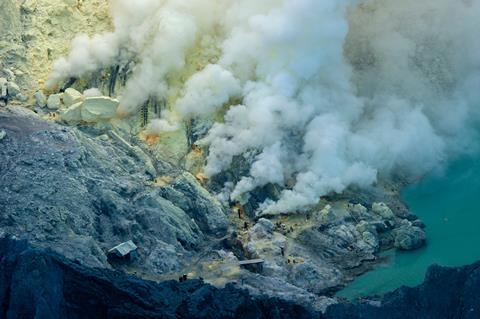 A worker carries sulfur inside the Ijen crater in the Ijen volcano, East Java, Indonesia

Volcanic gases are analysed using devices called spectrometers, which measure optical absorption. Different gases have different absorption characteristics. Satellites also provide optical analysis. Jenni says: ‘In some ways we are imaging the interior of the Earth with the instruments that we have.’

Despite vast amounts of information, predicting volcanic activity is extremely difficult. Jenni adds that forecasting models are: ‘nowhere near as sophisticated as weather forecasting. What we are trying to do is explain the processes behind the patterns of data that we see.’

One process of particular interest is historic mercury release. Volcanoes are the largest natural source of mercury in the environment. Although a liquid metal at room temperature, volcanoes release mercury as a gas which travels long distances in the atmosphere. Tamsin says: ‘We can use mercury as a fingerprint for really large episodes of volcanic activity in the past.’ By hunting for mercury in rocks laid down long before humans set foot on the Earth, researchers are trying to link mass extinctions to volcanic activity.