In 1898 Pierre and Marie Curie discovered polonium and radium and were jointly awarded, with Henri Becquerel, the 1903 Nobel prize in physics for their work on radioactivity. In 1911 Marie was also awarded the Nobel prize in chemistry for the discovery of these elements.

2011 is the UNESCO International Year of Chemistry as well as the hundredth anniversary of the award. Therefore it seems doubly appropriate to mark this centenary by outlining the discoveries, brief chemical features and principal applications of polonium and radium, as well as two other elements associated with the Curies: francium, discovered in Marie's Radium Institute in 1939; and curium, named after Marie and Pierre. 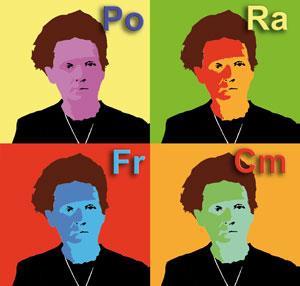 Marie1,2 (1867–1934) was born in Warsaw as Maria Salomea Sklodowska. She showed an early interest in science and was encouraged in this by her parents who were both teachers. Advanced scientific studies were not then possible for Polish women so Marie followed her sister Bronia to Paris to study physics and chemistry at the Sorbonne in 1893–4. After meeting Pierre Curie, a pioneer in piezoelectricity and magnetochemistry in 1894, the couple married in 1895.

After Henri Becquerel's discovery of radioactivity in 18961,2 Marie decided to work on 'Becquerel rays' for her doctorate. Using one of Pierre's electrometers she showed, by studying a wide range of inorganic materials, that of the then known elements, only uranium and thorium were radioactive. She also showed that uranium ores were more active than pure uranium and so must contain other, stronger, radioactive constituents.3 At this point Pierre joined her research work, continuing until he was tragically killed in a road accident in 1906. 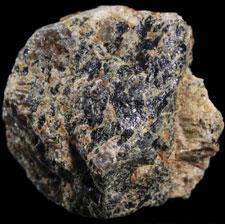 Pitchblende, the source of uranium for the Curies

On 14 April 1898 Marie dissolved 100g of pitchblende, UO2, in HCl and passed H2S into the solution; the precipitated sulfides were still highly radioactive. Further manipulations showed that the sulfide of the new material co-precipitated with that of bismuth. However, on sublimation minute traces of the radioactive sulfide condensed on a cooler part of the tube than the bismuth. In July the Curies published a paper, presented to the French Academy of Sciences by Becquerel, in which they coined the term radioactive. They wrote:

if the existence of this new element is confirmed, we propose to call it polonium from the country of origin of one of us.

Crucially, they also suggested that radioactivity was a property of the atom.4 In a publication in 1902 on the nature of radioactivity they briefly cast doubt on the existence of polonium, but it was isolated later that year by Willy Marckwald.

Mendeleev had allocated a place for polonium in his 1889 periodic table as dvi -tellurium, predicting an atomic weight of 212 (modern value 209.98). There are 46 known radioactive isotopes of polonium5 and the Curies had probably isolated 210Po, with a half-life (t½) of 138 days.

Because of its scarcity in nature 210Po is now normally made by neutron irradiation of bismuth in a nuclear reactor:

Most of the chemical work on polonium uses man-made 210Po as it is so rare in nature. Group 16 elements show an increasing tendency to metallic behaviour with increasing atomic weight: oxygen and sulfur are non-metals, selenium and tellurium semi-conductors, but polonium is a soft, silvery-white metal with much higher electrical and thermal conductivities than tellurium. The α and β forms of the element and its compounds emit a blue-white glow, and study of polonium chemistry is difficult because polonium is intensely toxic and the α-emission from 210Po attacks glassware and rapidly degrades its compounds.The electronic configuration of Po is [Hg]6p4 and the principal oxidation states of its compounds are IV (predominant in solution), II and -II, with oxides, halides, sulfides etc of Po(IV) and Po(II). The commonest coordination numbers are six (octahedral or trigonal bipyramidal) and eight (cubic).

Polonium compounds were used as anti-static agents for gramophone records and for textile and photographic plate manufacture. Such uses are now rarer, but a Be-210Po mixture is a useful neutron source. Irène and Frédéric Joliot-Curie used 210Po as an α-emitter for their own work on transmutation which earned them the 1935 Nobel prize in chemistry.

Recently a more sinister application was found for polonium. In November 2006 someone added 210Po, probably as a chloride, to tea drunk in a London hotel by Alexander Litvinenko, an ex-KGB officer who had defected to the West. Litvinenko died after ten agonising days – as little as a microgram of polonium is fatal.

Soon after their announcement of polonium the Curies reported another radio-element, radium, on Boxing Day 1898.4

Unlike polonium this new radioactive material was not precipitated from pitchblende solutions by H2S, (NH4)2S or NH3, but it had a water-insoluble carbonate and was chemically akin to barium, which acted as a carrier for it. The Curies' collaborator Eugène Demarçay, who remarkably measured atomic spectra optically despite having lost an eye in a laboratory explosion, showed it had a previously unknown spectrum.

In 1902 Marie isolated 0.1 g of anhydrous RaCl2 by repeated recrystallisations of BaCl2-RaCl2 from HCl, estimating an atomic weight of 225. In 1907 she refined these separations, obtaining 0.4 g of RaCl2, and re-determined the atomic weight to be 226.45 (modern value 226.03). A periodic table of 1902 predicted this element as eka-barium, with an atomic weight of 226. There are at least 42 radioactive isotopes of radium,5 of which four occur in nature (the α-emitter 226Ra was probably the one the Curies discovered with t½ = 1620 years).

Radium is soft, has a lustrous silvery colour, quickly blackens in air and reacts with water to give Ra(OH)2. Most of its compounds are white, and they yellow and darken further due to internal α-emission. It is a typical group 2 element, electronic configuration [Rn]7s2, closely resembling barium in its general chemistry. The chloride and bromide are slightly less water-soluble than the barium analogues (eg RaCl2 24.3 g per 100 cm3 of water, BaCl2 30.7 g per 100 cm3 at 25°C); conversely Ra(NO3)2 is more soluble than Ba(NO3)2. Whereas Ba salts colour flames an intense green, Ra imparts a carmine-red colour. 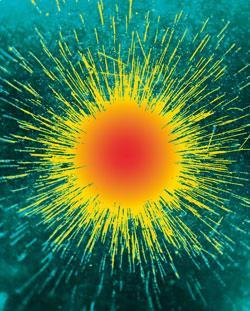 Another article in this issue concerns early uses for radium in cancer therapies and other treatments.1 Radium's uses in cancer treatment are now more limited, with other radioisotopes being more commonly used.

In 1939 Marguerite Perey (1909–1975), earlier a student of Marie Curie, purified actinium and noted a residual β-emitting species – formed by the α-decay of 227Ac – not assignable to any other radio-element. All the alkali metal perchlorates were effective carriers for it and she proposed that it was the new group 1 element 87. She first called it AcK, then catium, but was finally persuaded by Irène Joiliot-Curie to use the patriotic name francium.6

Mendeleev's 1871 periodic table predicted dvi -cesium with a suggested atomic weight of 220 (modern value 223.02) in group 1. The likely sequence of formation and disintegration is

Although artificial radioactive isotopes of francium can be made (there are at least 49)5 they all have half-lives shorter than the naturally occurring 223Fr, for which t½ = 21.8 min. 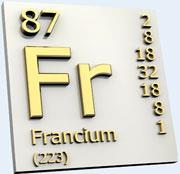 It is estimated that at any one time the uppermost kilometre of the Earth's crust will only contain 10-30 g (some 2x10-18 ppm) of francium, so it is not surprising that no compounds or the metal have been isolated, although it is predicted that the metal would melt at about 30°C. The electronic configuration is [Rn]7s1 (group 1), and no practical applications have been reported.

Studies on the neutron-induced fission of uranium at Berkeley in 1941 unexpectedly produced 23993Np and 23994Pu. Scientists subsequently expended much work on making the artificial elements 95 and 96 (colloquially referred to at the time as 'delirium' and 'pandemonium'), using separational procedures based on the premise that they would have high oxidation-state chemistries like neptunium and plutonium. However, Glenn Seaborg realised in 1944 that these elements, rather than being transition-metal congeners of iridium and platinum respectively, could be members of a lanthanide-like series (the 'actinides'). With the Berkeley cyclotron, 32 MeV α-radiation was used to produce curium:

Chemical separations appropriate for a trivalent ion subsequently produced evidence for the existence of curium. It was the first actinide to be named after people (the Curies), just like its lanthanide congener gadolinium was named after the mineralogist associated with those elements, Gadolin. The metal was isolated in 1951 and some 29 radioactive isotopes are known,5 of which 242Cm (t½ = 162.9 days) and 244Cm (t½ = 18.1 years) are most useful. 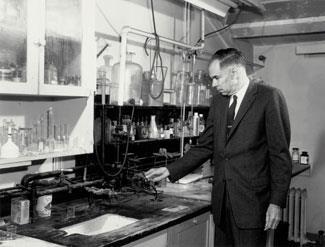 There are two main oxidation states, IV and III with the latter by far the more common. Their chemistry is extensive: all four tetra- and tri-halides are known, and there are many coordination and organometallic complexes.

Curium(III) salts are isomorphous with their lanthanide analogues, and the solution chemistry of Cm(II) is similar to that of the lanthanides.

The basic electronic configuration is probably [Rn]7s25f7, though some mixing of 6d and 5f orbitals is likely. For curium(III) complexes the magnetic moments are high – for example CmF3 has a magnetic moment of 7.65 Bohr magnetons – while their electronic spectra are very sharp, similar to those of its lanthanide congener gadolinium, arising from f-f transitions.

Both 242Cm and 244Cm produce considerable heat during their α-emissions, and are used in thermoelectric and thermionic power sources in satellites and remote-sensing devices. Like all these elements curium is biologically dangerous. It bio-accumulates in bone tissue where the radiation destroys bone marrow.