Gels and their uses

Stephen Ashworth explores the important role gels play in our daily lives, from jellies to contact lenses, in this article from the ‘Avogadro’s lab’ series

What do you get if you turn a solution inside out? Let’s think about a solution of sugar in water: there are lots of water molecules (the solvent) which are all touching and making a 3D network; the sugar molecules (the solute) are spread evenly throughout the solution at large distances from one another. On the other hand, if we take a 3D network of a solid and spread molecules such as water evenly throughout the network, we might consider this to be an ‘inside out’ solution.

There are many examples of these that we use routinely. Gelatine, that forms a 3D network able to trap water, is a good example. This property of gelatine led to the name we still use for these materials today: gels. This term was coined by Scottish chemist Thomas Graham in the 19th century. Even though a gel will behave like a solid, most of its weight is often fluid. 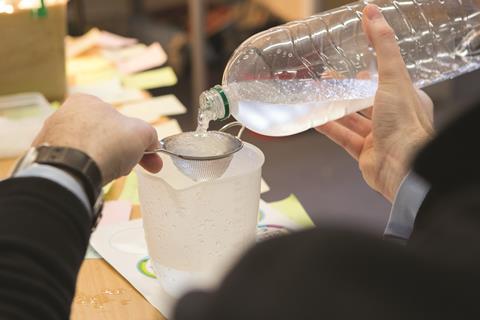 This year’s Royal Society of Chemistry Global Experiment explores hydrogels, a class of gels that trap water. Hydrogels are widely used in everyday products such as nappies, hair gels, contact lenses, wound dressings and controlled release drug delivery systems. Hydrogels similar to those in nappies are used in soil to absorb large amounts of water and then release it slowly to plants.

Hydrogels can also be used to create sensors, as their physical properties change in response to their environment. Mechanical sensors can be made that make use of the fact that hydogels swell on absorbing water and shrink again when it evaporates away. Other properties − such refractive index, fluorescence intensity or how they transmit light − can also be used to read information from a hydrogel sensor.

Aerogels are another sort of gel but this time the ‘fluid’ trapped in the solid 3D network is air. Some aerogels contain 99.8% air. These materials are extremely lightweight, able to withstand high temperatures and are strong enough to support many times their own weight if it is gently and uniformly applied. They have been used for a number of space applications including by the NASA Stardust mission to capture extraterrestrial dust particles from a comet and contain them during the trip back to Earth. Not only does the aerogel capture tiny high speed particles without damaging them, but the tracks left in the material indicate the direction of impact. Other potential applications being explored include for oil spill clean ups (some aerogels can soak up oil) and as insulating materials.

The gel that we are most familiar with is probably most often served with ice cream at parties: jelly. Jelly is a type of hydrogel, and unlike the hydrogels used in this year’s Global Experiment it is not very strong and as a result it is hard to make a jelly more than 10 cm tall. The Institute of Food Research, in Norwich, UK, runs an annual tallest jelly competition for local schools. Many materials can be used to increase the gel strength or give the jelly structure, but one of the rules is that only edible ingredients may be used. Previous years have seen fruit, sponge and even pasta used to support the jelly. Once you have finished the Global Experiment, you might like to try your very own tallest jelly competition and see if you can smash the current record of 65 cm tall.