An investigation into the geometry of crystal structures and their Madelung constants provides a way of calculating lattice energies and challenging the most able and mathematically competent A-level students.1

When we teach ionic bonding at GCSE we usually show students the structure of sodium chloride. We tell them that oppositely charged ions attract one another, and that the ions in the crystal lattice are, accordingly, ordered so that the immediate neighbours around a given ion have the opposite charge. At A-level we build on this model and explain that an ion in sodium chloride has six neighbours and that the ions are arranged in a cubic lattice. We can challenge our students further by introducing them to the Madelung constant as a way of calculating the lattice energy of an ionic structure, given the atom positions in the crystal from X-ray diffraction studies. By comparing the values of lattice energy (directly or indirectly) through experiment provides a good test of the accuracy of the ionic bond model and thus a better insight into the nature of chemical bonding.

From Coulomb's law to lattice energy

The lattice energy of sodium chloride, for example, may be calculated to a reasonable approximation from first principles using Coulomb's law, which states that the electrostatic potential energy (E) between two charged particles is proportional to the product of the charges(q1 and q2) and inversely proportional to the distance between them (r):

where ε0 is the permittivity of free space. We can adapt the Coulomb expression to incorporate the ionic radii (r+ and r- for the cation and anion, respectively), the electron charge e, the magnitudes of the ion charges (z+ and z- for the cation and anion, respectively) and Avogadro's constant L. Neglecting the repulsive interaction at short interionic distances, we obtain:

where A is the Madelung constant, ie a numerical factor which takes the relative positions of all the ions in the lattice structure into account in the calculation of the lattice energy. The Madelung constant is the sum of all the ionic interactions in the crystal based on the three dimensional positions of the ions. Each term in this series is a fraction. The numerator of each fraction is the number of ions that are a given distance away from the reference ion; the denominator is the distance of the reference ion to the ions in question, as a multiple of the closest (ie touching) internuclear distance between ions. If the lattice is cubic, the distances can be calculated using Pythagoras' theorem. The series starts with nearest neighbours and continues outwards sequentially. 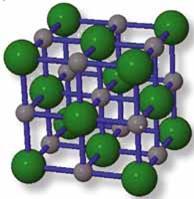 If we consider sodium chloride, given the high symmetry of the lattice we would expect some kind of order to the terms in the structure, or Madelung constant, but it isn't obvious what that order is at first. Figure 1 shows a fragment of the sodium chloride crystal structure: grey ions represent sodium, and green chloride; the ions are only shown at half-radius size to show the structure more clearly; blue lines connect ions that are, in reality, touching. This fragment is known as a unit cell because the bulk crystal structure can be obtained by displacing the cube, or by stacking together identical cubes. If we count the ions, starting from the neighbours of the central sodium ion, we find that patterns emerge:

Having now considered all the ions in the cubic fragment, we need to visualise neighbouring cubes to progress further.

The number of ions at distances r√4, r√5, and r√6 from the central sodium ion can be seen using Fig 2, bearing in mind that the central cube has six of these neighbouring face-sharing cubes. A couple of patterns emerge: the sign of the ions alternate as we move to more and more distant neighbours, which is what is expected given that ions tend to be in contact with oppositely charged neighbours. Also we see that the distance of the ions has followed the pattern r√x where x is the number of ions away an ion is from the reference ion. However, complications arise if we try to continue this trend for distances much further out. 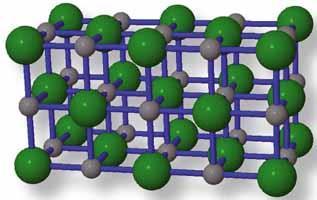 For the seven-away neighbours we need to consider the cubes diagonally opposite the 12 edges of the central cube. The seven-away neighbours are in the centre of these 12 cubes. These curiously also have the same charge as the reference ion because they too are in the centre of a unit cell. According to Pythagoras, the distance of these ions from the central ion is not r√7 but r√(22 + 22) = r√8.

The series we have obtained so far is:

subsequent terms? Let us consider the denominators first. These terms are the result of the Pythagorean expression r√(x2 +y2 + z2) where x, y and z are the number of steps of r along each of these axes in the crystal. The lack of a √7 denominator is because it is impossible to arrive at seven from the sum of the squares of three integers, while there are two terms with a √9 denominator because there are two ways of constructing nine from the sum of the squares of three integers: 9 = 22 + 22 + 12 = 32 + 02 + 02. For each term the numerator effectively gives the number of combinations of x, y and z that give the denominator value, bearing in mind that x, y and z may be positive or negative, corresponding to the direction of stepping along the crystal axis. With each step of r along a crystal axis the charge of the ion changes sign. Therefore when the sum x + y + z  is  positive it corresponds to a repulsive interaction and a negative term in the series. We can generalise in this way because moving any number of integer steps of ralong any of the crystalline axes from an ion takes us to another ion. It is not so simple in other types of crystal structure.

From this general description of the Madelung series, it is possible to automate the calculation of the different terms. Taking the approach of the n-away neighbours, ie considering ions a given distance from the reference ion, we first need to consider if there is more than one set of x, y  and z  that equate to that distance, or indeed none at all. For example, there are two sets of ions giving rising to √18 in their denominators, because 18 = 42 + 12 + 12 = 32 + 32 + 02, while there are no ions a distance r√15 from the reference ion.

Given these derived values of x, y and z, the number of combinations of them depends both on whether they are non-zero and how many are different. There are 3!/m! different combinations of the x, y and z where m is the greatest number of times a value appears in the sequence. Non-zero terms can take positive or negative values depending on whether the ion being counted lies along the positive or negative axis, so there are 2n  combinations depending on these signs where n is the number of non-zero values of x, y and z. So the numerator for each r√(x2 + y2 + z2) denominator is 3!/m! × 2n. The maximum multiplicity of a set of  x, y, z  is when all three values are different and non-zero, the first of these occurring at r√(12 + 22 + 32) = 14 when there are 23 × 3! = 48 combinations.

By considering terms with gradually increasing denominators we are effectively considering concentric spheres of ions with reference to our central ion. As such the series will consist mainly of alternating positive and negative ions, and therefore will never converge. So even when the algebraic problem is understood there still remains a computational one. The convergence problem can be overcome when considering concentric cubes rather than concentric spheres of ions. Ions lie in concentric cubes that are defined by the largest (in magnitude) value of the x, y and z values that define their position from the reference ion. In a similar way, all the possible combinations of these x, y and z values must be summed for each concentric cube, for which there will still be a series of terms with different denominators. The concentric cube terms will converge to an answer but only slowly. The speed of the convergence can be observed using the resource in reference 2. The answer for the Madelung constant in sodium chloride is 1.74756 (six significant figures).

Caesium chloride also adopts a cubic lattice, which lends itself to these problems, but it is slightly more difficult to work out its Madelung constant. Figure 3  shows the caesium chloride unit cell. The yellow ion represents caesium, and the green ions chloride. The ions are only drawn at half-radius size to show the structure more clearly. Red lines connect ions that are, in reality, touching. 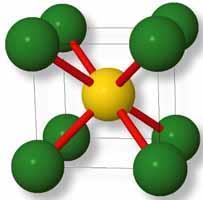 If we adopt the same system of crystal axes as we did for sodium chloride, and again take each increment of x, y and z to be half the length of the cube edge, then we can adopt a similar approach. However, in the case of caesium chloride, since the ion positions are only in cube centres and cube corners, then only certain combinations of x, y and z  will refer to ion positions. Caesium ions will only be found when x, y and z  are all even, and chloride ions only when x, y  and z are all odd. This is therefore a constraint that must be applied to any computations. We must also bear in mind that x, y and z  units of the edges of the CsCl unit cell are no longer equivalent to the internuclear distance between ions that are in contact (as was the case with the NaCl unit cell); the CsCl internuclear distance is √3 times the x,y  and z values since ions are in contact along the body diagonal of the cube. Therefore the value which this Madelung series converges to must be multiplied by √3 to give the correct value. In reference 2 the last stage of the calculation is therefore to multiply the raw Madelung constant by √3.

The convergence problems with caesium chloride are more difficult to overcome than with sodium chloride. This is because both concentric spheres and concentric cubes of ions in the caesium chloride structure pass through positive and then negative ions in an alternating way and therefore never converge. However, by considering the positive and negative terms separately in a concentric cube calculation, the two series are seen separately to behave in a simple linear way. Taking the average of the two series of ions, we obtain the Madelung constant, which is 1.76267 (six significant figures). Since the gradients of the two series are symmetrical about the x axis2 then the average of the intercepts on the y axis gives the Madelung constant. A literature search revealed that this approach has been taken before.3

This activity may be extended to more complicated cubic structures such as zinc blende or perovskite, where convergence problems are likely to be yet more difficult to overcome. More advanced approaches may involve engineering charge neutrality of the fragment of interest by taking fractional charges of ions in the outer layer under consideration.3 A discussion of the conditional convergence of infinite lattice sums is given in reference 4. We are currently considering the more demanding question of hexagonal lattice sums.