What real chemists do can be the basis of motivating investigations and learning in school chemistry. A problem faced by a panel of quality control scientists, Which is fresher, supermarket-packed spinach or frozen spinach?, provides the basis of investigative work across Key Stages 3-5. 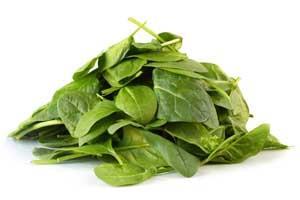 Analytical chemistry is an integral part of the 2008 chemistry specifications at GCSE and A-level, and, at a basic level of paper chromatography, has been part of Key Stage 3 science for years.1 The new specifications reflect the increasing importance of analytical techniques to chemists and fit in well with 'how science works'.

At GCSE chromatography and retention factors (Rf) have been written into the specifications with a focus on additives in foods, and at A2 some specifications now expect students to interpret retention times and mass spectral data from HPLC-MS to resolve complex mixtures and elucidate the component structures.

This presents chemistry teachers with the difficult task of finding suitable course material that can be taught to students from Key Stages 3-5 which explores the requisite parts of analytical science but which also encourages an investigative approach2 that will satisfy the requirements of 'how science works'. The investigation described here exploits chlorophyll chemistry and is my way of addressing these issues. Entitled Which is fresher, supermarket-packed spinach or frozen spinach?,  the investigation can be used at Key Stages 3 and 4, and with modification at Key Stage 5.

Chlorophyll molecules, the green pigments found in chloroplasts of leaf cells, absorb light and use it to provide energy for photosynthesis.3 Chlorophylls are Mg(II) complexes of cyclic tetrapyrroles similar to porphyrins (1) but differ in that they are saturated between C-17 and 18.

The most abundant chlorophyll in green plants is chlorophyll a (2), though many plants also contain significant amounts of chlorophyll b, which differs from chlorophyll a  through the inclusion of an aldehyde group at the C-7 position rather than a methyl group.

Chlorophyll molecules are chemically reactive and decompose once they are removed from the protective environment of the cell. The main degradation products of chlorophyll are grey pigment molecules, the phaeophytins. These molecules differ from the parent chlorophylls in that the central weakly bound Mg atom has been replaced by hydrogen atoms.

Thus any cellular damage caused by ageing of a leaf should show up in an analysis of the chlorophyll molecules and their degradation products,4,5 by using TLC or HPLC, and this would give students a good insight into the freshness of the sample.

This, however, is not the whole story because chlorophyll degradation has a number of pathways, leading to other products, not all of which are detectable by TLC analysis. Chlorophyll allomers form during extraction and analysis of the chlorophylls as a result of autoxidation in organic solvents. 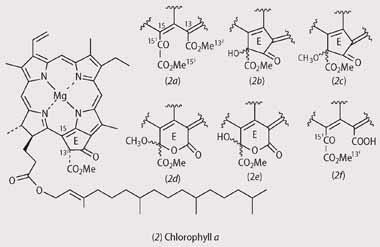 While acetone (propanone) does not promote allomerisation, prolonged exposure of acetone solutions containing water will lead to allomerisation involving 3O2 from the air and/or solvolysis with water molecules to produce a different set of products (2 (b), (e), and (f)).6

Box 1 - Using chlorophylls to assess the freshness of spinach leaves

Chlorophylls are molecules found in the chloroplasts of plants, and are responsible for the green colour of the leaves. They harvest the light needed to drive photosynthesis, the chemical process by which plants produce their food.

Plant leaves also contain pigments other than chlorophyll, the most abundant of these are compounds called carotenoids. We can see the wonderfully bright yellows, oranges and reds of carotenoids every autumn in the leaves that fall from trees. We can see them because the green chlorophylls degrade to colourless compounds as autumn progresses to winter.

Chlorophylls are easily degraded and damaged when the leaf cells break down. Looking at the types of chlorophylls and their breakdown products in a leaf can therefore tell us about the health or freshness of a leaf.

TLC works in a similar manner to paper chromatography - the pigment moves along the surface of the TLC plate depending upon its partition between the plate surface (stationary phase) and its dissolution in the solute (mobile phase). Each pigment has a different affinity for the plate surface and the mobile phase (partition coefficient) and will therefore move a unique distance along the plate. Developing the TLC plate in the mobile phase for a few minutes lead to the separation of the pigment mixture so that we can assess the freshness of the leaf according to the pigments we can identify that are present on the plate.

The investigation is presented to the students as a series of task statements:

You are a member of a panel of independent quality control scientists, responsible for identifying fresh, nutritious food for local school children. School chefs are looking to include more green vegetables in school meals and have decided that spinach will be a vital part of the exemplar school meal that will be served to celebrity chefs and ministers at the launch of a new range of school meals.

The chefs want to include the freshest ingredients possible, but there is some disagreement as to whether supermarket-packaged spinach or frozen spinach is the freshest. The freshest spinach will have the most intact chlorophyll a and the least phaeophytin a. You and your team must prepare and test the spinach samples for their chlorophyll content according to your experimental brief. Finally, you must answer the question, Which is fresher, supermarket-packed spinach or frozen spinach?, in a report which includes the evidence from your scientific observations and experiments.

Be prepared to present your own work and to assess the work of others so that your results are in agreement.

During this experiment you should wear goggles and follow all laboratory safety procedures. Work quickly to obtain the best results.

Classes of Key Stage 3 and 4 students are given the task along with a brief containing some background on how chlorophyll chemistry can be used to assess the freshness of the spinach, and an experimental procedure. Teachers must at this point complete a detailed risk assessment, taking into account the risk of handling flammable solvents. After reading the brief and discussing the problem as a group, the students do the experiment.

The results of TLC analysis of the chlorophyll extracts were clear enough for the students to base a qualitative conclusion as to the freshness of the samples.

The students had few difficulties in understanding the problem and obtaining a TLC from the crude chlorophyll extract. However, during the experiment and the subsequent write-up of the results they did share some common problems, which affected the accuracy of their results:

Extending the investigation to Key Stage 5

A useful extension activity for Key Stage 5 students is the analysis, by TLC and HPLC-MS, of the chlorophylls contained in a wet acetone extract of supermarket-bought spinach that has been stored in the refrigerator for a week after initial extraction. The basis of this challenge is for students to test for any transformation of the chlorophylls during this period. 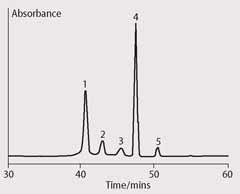 TLC of the extract revealed a product distribution identical to that observed in the original investigation. Analysis of the extract by HPLC, according to a published method,8 revealed a product distribution of five peaks with differing retention times (tR) (Fig 1). Identification of the chlorophyll derivatives was based upon their retention time and the parent ion mass of the chlorophyll derivatives after APCI-HPLC-MS (atmospheric pressure chemical ionisation-high performance liquid chromatography-mass spectrometry) analysis.9

The HPLC analysis illustrated the complexity of the original mixture, the HPLC separating five chlorophyll transformation products from the single spot observed in TLC.

As a further extension to this activity, students could be challenged to confirm the assignment of the peaks observed in the HPLC chromatogram, which are based on parent ion masses and retention time. This can be done by assigning the fragment ions in the mass spectrum of the main chlorophyll transformation product observed in the HPLC chromatogram (Fig 1, peak 1) of Mg-purpurin-7 monomethyl ester. The mass spectrum of this transformation product exhibits diagnostic fragment ions from the altered ring-E portion of the chlorophyll molecule which is sufficient to allow students to elucidate and confirm the structural assignment given the main mass losses from the pseudomolecular ion [M+H]+ as shown in  Fig 2. 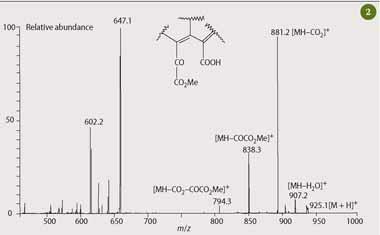 Purifying chlorophyll a from spinach leaves

Rinse spinach (200 g) with deionised water and dry between paper towels. Homogenise the spinach in a blender with acetone (500 ml) for three minutes. Filter the resulting solution through cotton wool to remove debris. Collect the resulting solution and add 1,4-dioxane (70 ml), followed by enough distilled water (around 30 ml) to precipitate microcrystalline chlorophyll. Decant the supernatant, dissolve the chlorophyll precipitate in acetone (200 ml) and divide between four large centrifuge bottles. Centrifuge the chlorophyll solutions at 2000×g for five minutes to remove any remaining cellular debris. Combine the supernatants and then remove acetone by using a rotary evaporator. Purify the solution by large-scale column chromatography.12

Pack a large glass chromatography column (7 cm id × 50 cm) with icing sugar by using a water pump and wash the column with one bed volume of hexane. Dissolve a portion of the crude chlorophyll extract in diethyl ether (ethoxyethane, 3 ml) and carefully pipett onto the top of the column. Develop the column initially with portions of hexane (200 ml) and then with portions of 0.1-0.5 per cent 2-propanol in hexane until the chlorophyll fractions have eluted.

The elution order of the pigment fractions is: carotenoids (yellow), phaeophytin a (grey), chlorophyll a  epimer (green), chlorophyll a (blue/green) and chlorophyll b (olive green). Combine the pure eluents and remove the solvents in vacuo.

My students obtained a yield of ~5 mg of chlorophyll a. To test the efficiency of the chromatographic separation and therefore the purity of the sample, they analysed a small portion of chlorophyll  a  in acetone by infusion into an APCI-equipped mass spectrometer. They followed a literature method involving the post column addition of methanoic acid to improve the analytical sensitivity of the mass spectrometer.11

Chlorophylls do not protonate well under the conditions of APCI, owing to the central Mg atom, so it is better to convert them to phaeophytins because these molecules accept a proton more readily in the APCI interface. Analytical sensitivity is improved by an order of magnitude. 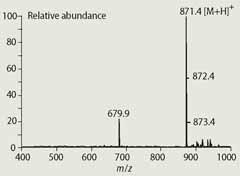 The resulting mass spectrum (Fig 3) exhibits a strong [M+H]+ parent ion at m/z 871, which is consistent with its assignment as pure chlorophyll a that has been converted to phaeophytin a  during the analysis. The ion observed at m/z 679.9 is an impurity, possibly a carotenoid. The APCI-HPLC-MS analysis therefore gave the students a rapid method for assessing the purity of their chlorophyll a.

Pure samples of the pigments within spinach obtained this way are useful standards to identify the chlorophyll derivatives within the original student brief if they are spotted on the TLC plate along with the original spinach extracts.

By giving the students a real problem to investigate encourages them to take part in the activity thoughtfully. This approach also creates an opportunity for students to see that chemistry is relevant to the community and the school as a whole, which mirrors the objectives of 'how science works'. Furthermore, writing the results in the form of a report encourages literacy and scientifically articulate writing that can be peer reviewed, mirroring a real scientific process.

My thanks to Planet Science, the Engineering and Physical Sciences Research Council (EPSRC) and the University of York for support and facilities.