Is thorium the perfect fuel?

In 1989, two chemical engineers – Martin Fleischmann and Stanley Pons – announced they had carried out the first nuclear fusion experiments at room temperature (cold fusion) which, they hoped, would steal a march on physicists researching fusion at high temperatures. Sadly, problems with the experiments were identified and the scientific community debunked their claims. However, chemists now have another opportunity to become the driving force behind an environmentally-friendly nuclear reactor. 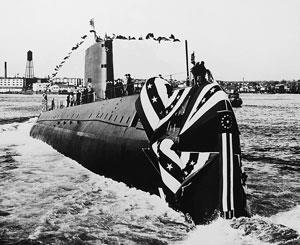 The launch of the first nuclear-powered submarine, the USS Nautilus, in 1954

The liquid fluoride thorium reactor (LFTR – pronounced lifters) was first developed in the 1950s by Alvin Weinberg at Oak Ridge National Laboratory, US. This is a type of thorium molten salt reactor and is essentially a chemical plant. The development of LFTRs was soon mothballed because they did not produce very much of the plutonium required to feed the nuclear arms race between the US and the USSR. A LFTR has never been used commercially. Instead, the pressurised water reactor (PWR) was widely adopted. This type of reactor produces plutonium and was also a more natural evolution of the nuclear weapons research undertaken as part of the US-led Manhattan Project during the second world war and for the power plant in the first nuclear-powered submarine, USS Nautilus, commissioned in 1954.

There are 441 nuclear reactors worldwide, meeting about 5% of the global demand for energy and 13% of the world’s electricity supply. The majority of these have PWRs. Some countries are now starting to re-explore LFTR technology to see if commercialisation is possible, due to the many advantages it is expected to offer over PWRs.

Nuclear fission is a nuclear reaction where an unstable ‘parent’ nucleus splits into smaller ‘daughter’ nuclei along with free neutrons, which can induce further fission events as part of a self-sustaining chain reaction. The combined mass of the products is less than the combined mass of the original nucleus plus initiating neutron. The difference in mass – the mass defect – manifests itself as energy, according to Einstein’s famous equation E = mc2. In contrast to chemical reactions, neutrons need to be moderated or slowed down to increase the probability of inducing fission.

Compared to the status quo

The thorium fuel used by LFTRs is easier to come by than the uranium-235 used in PWRs. Thorium is present in the Earth’s crust at about four times the amount of uranium and is more easily extracted. Additionally, U-235 has a natural abundance of only 0.7%, and requires expensive enrichment to 2.5% before it can be used in a PWR. 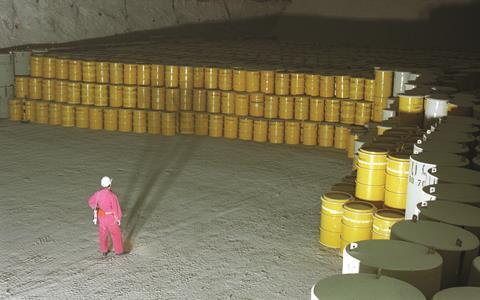 The LFTRs also do not waste any of their nuclear fuel, unlike PWRs. The solid uranium oxide used in PWRs is a poor thermal conductor and so the fuel rods become stressed by internal temperature differences and damaged by radiation. Fission products are also trapped within the fuel rods, acting as ‘poisons’ and compromising a sustained chain reaction by absorbing neutrons. This means that fuel rods need to be replaced when less than 5% of the available energy has been used, and the plant must be shut down every 18 months to allow one third of the rods to be removed and the remainder shuffled. This ‘spent’ fuel is intensely radioactive and is waste that needs to be managed. In contrast, all of the U-233 dissolved in the molten salt of the LFTR undergoes fission. This is because the U-233 atoms are circulating freely in solution so that every nucleus is equally available to absorb a neutron. Also, unlike solid fuel, liquid fluoride salts are impervious to radiation damage and not subject to structural stress. Poisons bubble out of solution in LFTRs or can be chemically removed.

LFTRs work at atmospheric pressure, in contrast to the 150 to 160 times atmospheric pressures needed by PWRs. In PWRs, water is the coolant and there are two cooling stages or loops. In the primary loop, water is pumped under high pressure to the reactor core where it is heated by the energy generated by the fission process. This loop is kept under high pressure to allow the water to warm to up to 330°C. Heat from the primary coolant loop is then conducted through heat exchangers to the secondary loop where steam is generated to spin an electric generator.

High pressure  in a PWR increases efficiency  but expensive piping and pressure vessels are required and, because steam occupies 1000 times the volume of liquid water, massive containment buildings are also needed.

The salt in the core of the LFTR acts as its own coolant but is passed through a heat exchanger to maintain the temperature of the salt at 800°C and to transfer heat to an inert gas like carbon dioxide or helium. The thermal expansion of this gas drives a turbine to generate electricity

While the LFTR initially lost out to the PWR because it does not generate as much plutonium waste product, today that is viewed as an advantage. Six more neutron absorptions are required to reach Pu-239 when starting from Th-232, compared to the U-238 which makes up 97.5% of the uranium in a PWR. This prevents fretting about whether Pu-239 is being diverted into a nuclear weapons programme. It also reduces the headache of waste management, as after 300 years the waste from thorium-fuelled reactors is about 10,000 times less toxic than that from uranium-fuelled reactors. The relatively small amount of radioactive waste produced in LFTRs requires a few hundred years of isolated storage versus the few hundred thousand years for the waste generated by PWRs. 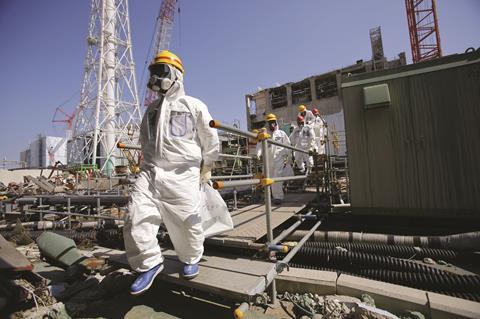 The 2011 meltdown of the Fukushima Daiichi nuclear power plant in Japan was caused by a tsunami disabling the PWR’s cooling system. LFTRs cannot suffer meltdowns because their fuel is already molten. PWRs contain control rods that are designed to absorb neutrons. They are inserted into, and removed from, the core of the nuclear reactor as required to control the rate of fission. They are usually made of boron or cadmium and are suspended from the ceiling by electromagnets. If power failure occurs the control rods fall under gravity into their slots in the reactor core below. However, like applying brakes in a car, the reactor has thermal inertia and cannot stop producing thermal energy instantaneously. The core remains hot and fission continues among the daughter nuclei, which means that meltdown is unavoidable if the coolant stops circulating.

In stark contrast, the LFTR needs power to prevent shutdown of the reactor. It has a ‘freeze plug’ at the bottom of the core – a plug of salt, cooled by a fan, to keep it below the freezing point of the salt. If the power turns off, the fan stops. This causes the plug to melt and the liquid fuel to flow, under gravity, into a catch basin below. 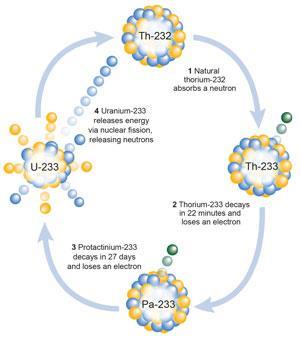 The LFTR is based on chemical engineering technology and uses uranium-233, a different isotope of uranium from that used in PWRs. It consists of a uranium-233 ‘core’ nested inside a thorium-232 ‘blanket’. These both contain molten fluoride salts of lithium and beryllium and a graphite ‘jacket’ that separates the core from the blanket.

The U-233 dissolved in the core undergoes fission, producing ‘daughter’ nuclei and (on average) just over two neutrons. One neutron induces further fission of U-233 in the core while the second neutron is moderated by a graphite jacket before it is absorbed by Th-232 dissolved in the blanket. This produces Th-233, which then undergoes two b decays to ‘breed’ a replacement U-233 nucleus.

In the molten fluoride salt of the thorium blanket, the newly created U-233 forms soluble uranium tetrafluoride (UF4). Bubbling fluorine gas through the blanket solution further fluorinates the UF4, which comes out of solution as uranium hexafluoride (UF6). The UF6 is then captured and fed into the core through a reduction column in which hydrogen gas reduces it back to soluble UF4. Thorium tetrafluoride does not react with the fluorine gas in the fluorination process and stays in the blanket unchanged.

Looking to the future 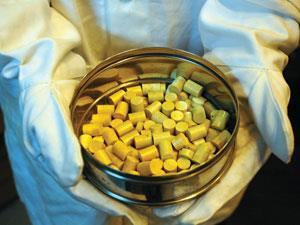 One of the most ardent advocates of LFTRs is Kirk Sorensen, from the Energy from Thorium Foundation in Cleveland, US. His interest in thorium started in 2000 while he was working for NASA and considering ways to provide energy for a lunar community. There are no fossil fuels on the moon and with no atmosphere there is no access to wind power. Solar energy is also not an option because the lunar day lasts a month and it is not possible to store sufficient energy for the fortnight of night time. Nuclear energy was the only option but there is no water for coolant on the moon. LFTRs are the obvious choice and once he decided they were a good fit for a lunar community he turned his attention to whether LFTRs could also be developed for use here on Earth. There are, however, still technical challenges to be overcome, and a 2010 report by UK National Nuclear Laboratory concluded that there was still 10 to 15 years of concerted research and development effort and investment before the thorium fuel could be used in current reactors and much longer for any future reactor systems such as LFTRs to be used commercially.

India is keen to use thorium as a nuclear fuel, and plans to produce 30% of its electricity from thorium by 2050. This may, however, be based on solid rather than liquid fuel, which offers fewer advantages. China is also investing heavily in thorium fuel-based research programmes and the French are showing an interest.

Mike Follows is a teacher at King Edward’s School in Birmingham, UK