Although virtually every textbook reports that Robert Bunsen and Gustav Kirchhoff discovered caesium, they failed to isolate the free metal. That honour belongs to Carl Setterberg, who published his discovery in 1881.

Scientists should know not to trust everything they read on the Internet. An entry on caesium taken from a web-page ambitiously titled Chemistry explained  reads:

Caesium was discovered in 1861 by German chemists Robert Bunsen (1811-99) and Gustav Kirchhoff
(1824-87). They found the element using a method of analysis they had just invented: spectroscopy. Spectroscopy is the process of analysing light produced when an element is heated. The light produced is different for every element. The spectrum (plural: spectra) of an element consists of a series of coloured lines.1 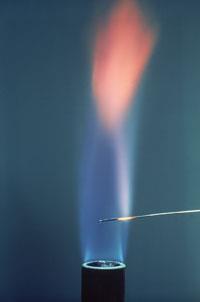 First, the authors get the date wrong. Caesium dates from 1860, making this year its 150th anniversary. Secondly, Kirchhoff was a physicist, not a chemist. Thirdly, to claim that he and Bunsen invented spectroscopy as a method of analysis is open to dispute. And spectroscopy involves flame-induced excitations and decays, the energies of which determine the colour of the flames.

As long ago as 1756 Thomas Melvill published, posthumously, his observation of what we term today an emission spectrum:

I examined the constitution of these different lights (from the flames of spirit lamps fuelled by alcohol containing dissolved salts) with a prism and found that. all sorts of rays were emitted, but not in equal quantities; the yellow being vastly more copious than all the rest put together. 2 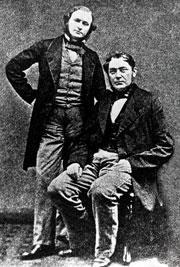 Sadly, Melvill died in 1753, aged only 27. Five years later, chemist Andreas Sigismund Marggraf reported that he could distinguish between sodium and potassium compounds by their different coloured flames. Sodium compounds 'burnt' with a yellow flame while potassium salts produced violet flames. Melvill's observations languished for 70 years before prisms were again used to analyse light emitted by coloured flames, and it was a century before Bunsen tried to develop a method of analysis from this phenomenon.

Aware that the intensity of some colours, such as those from sodium compounds, could mask less intense colours of other elements, Bunsen used filters to cut out some colours. A deep blue 'cobalt' glass filter transmits the violet hue of potassium but blocks the yellow of sodium (which is a common impurity in potassium salts). Kirchhoff suggested to Bunsen that he could improve on this by passing the light through a prism.3 This would separate yellow sodium light from the more distant violet colour of potassium.

Kirchhoff's suggestion was crucial, but scarcely novel. Nearly 30 years before, in 1822, John Herschel had passed light from various coloured flames through a prism and noticed patterns of bright, coloured lines separated by regions of darkness, but made little of it. Pioneer British photographer William Fox Talbot took this work further and in 1826 reported:

A glance at the prismatic spectrum of a flame may show it to contain substances which it would otherwise require a laborious chemical analysis to detect.

Talbot later differentiated between lithium and strontium compounds using this method: both give red-coloured flames, but their spectra are quite different. Following on from this work, William Allen Miller, professor of chemistry at King's College London, and David Alter, an American physician and inventor, published in 1845 and 1854, respectively, the emission spectra of various elements. Alter showed that the spectrum derived from brass was indeed made up from the spectra of its two components: zinc and copper. 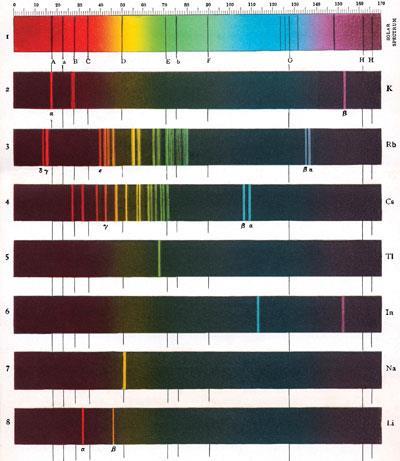 However, it was Bunsen and Kirchhoff who took the next step, recognising its wider application to the chemical analysis of the elements. Not only did they realise that the pattern of lines in the spectrum provided a unique fingerprint for a particular element, but that a novel spectrum would indicate the presence of a previously unreported element:

Spectrum analysis should become important for the discovery of hitherto unknown elements... We have had occasion already to convince ourselves that there are now such unknown elements. Supported by unambiguous results of the spectral-analytical method, we believe we can state right now that there is a fourth metal in the alkali group besides potassium, sodium and lithium.4

Bunsen had suspected for some time that there were other elements yet to be discovered. In 1841 he had invented the zinc-carbon battery that bears his name. He used this in numerous electrolysis experiments, including the first production of useful quantities of elemental magnesium in 1852, and of lithium in 1855. Describing their spectroscopic work on lithium, Bunsen and Kirchhoff report:

The glowing vapour of lithium compounds produces two sharply defined lines..This reaction surpasses all others known in analytical chemistry as to definiteness and sensitivity. In the technical production of lithium compounds, spectral analysis offers a tool of inestimable value for selecting (starting) materials and processes.

Bunsen studied the spectra of a wide range of materials. In an experiment using spring (spa) waters, which were known to be useful sources of lithium compounds, despite their low concentrations, among the familiar lines of known elements, he saw a sky-blue doublet that he had not seen before. He named this new element caesium, Latin for sky blue. But there wasn't much of it in the spa water - 10 litres contained just 2 mg of caesium chloride - so he commissioned a nearby chemical factory to evaporate down 12 000 gallons of the spring water so that he could isolate enough caesium to investigate its properties. He established the relative atomic mass of his element as 128.4 (modern value: 132.9). But for all Bunsen's expertise in isolating reactive metals by electrolysis, he failed to obtain pure metallic caesium.

The next year, in 1861, Bunsen and Kirchhoff reported the presence of another alkali metal in spa waters, which they named rubidium, from the Latin for dark red, again based on its spectrum.5 This time they did isolate the element by electrolysis, from molten RbCl (and also by reducing its chloride using potassium metal or by strongly heating its tartrate salt with carbon) and calculated its density as 1.65 g cm-3 (modern value: 1.53 g cm-3).

Bunsen must have found it frustrating that he could not isolate free caesium, particularly given his success with rubidium. When he electrolysed the molten chloride, he obtained a blue 'melt', which he described as a 'sub-chloride of caesium'. This was probably a colloidal dispersion of the metal in the CsCl. 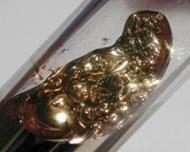 When he tried to electrolyse aqueous solutions of caesium salts, he used (as in the cases of the other alkali metals) a mercury cathode, because hydrogen ions have a high over-voltage at this cathode and the metal is discharged instead. But isolating the pure metal from the resulting mercury amalgam, which has always proved to be difficult, eluded Bunsen. This was to be achieved by Carl Theodor Setterberg, while he was doing research for his PhD.

Setterberg was born in 1853 in Skaraborg, Sweden, and spent his working life as an industrial chemist. The task assigned to him by his supervisor, August Kekulé (professor of chemistry at the University of Bonn) was to isolate caesium metal. Working in Bunsen's laboratory in Heidelberg, he decided to try and extract the metal from some of the huge amounts of waste material remaining after the extraction of lithium from lepidolite, an ore of the mica group.

His first step was to obtain a pure compound of caesium. He converted the waste ore into a mixture of potash alum and, to a much lesser extent, the alums of rubidium and caesium. He knew, from the work of chemist Joseph Redtenbacher in 1865, that fractional crystallisation of such a mixture would separate the potassium compound from the other two alums, which could then be further fractionated as their alum salts. 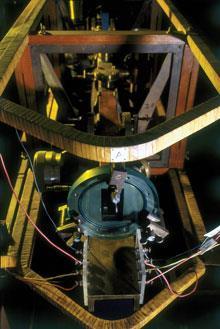 Setterberg started the crystallisations with around 350 kg of the alum mixture and finally obtained 10 kg of the caesium compound. This was far more than Bunsen ever had at his disposal. It meant Setterberg had enough material to try several different methods to isolate the free metal.

He tried the carbon reduction method (on caesium tartrate) that Bunsen had used successfully to isolate rubidium, but the experiment failed. He turned to electrolysis. Some years earlier, in 1858, E. Linnemann had used carbon electrodes to electrolyse molten potassium cyanide and produced potassium metal in the laboratory.6 Setterberg decided to extend this method to isolate caesium. While he was successful with CsCN alone, he found cyanide-based mixtures of caesium salts were even better:

I tried ... a mixture of 4 parts of caesium cyanide with one part of barium cyanide because the melting was much easier...which deposited high quality caesium pellets. The mixture took half an hour for the electrolytic decomposition. The cell was cracked open to give an abundance of the metal which was stored under petroleum spirit and melted together.7

Once isolated, caesium proved the most electropositive and alkaline of the stable elements. It readily sheds electrons and is used in photoelectric cells and as a catalyst in some organic reactions. Caesium hydroxide solutions can be used to etch silicon to make microelectromechanical systems for electronic devices with mechanical components. Solutions of caesium chloride are an excellent medium for ultracentrifugation in molecular biology; and as a lubricant for oil drills at great depth. Probably the most famous use of caesium is in the atomic clock. 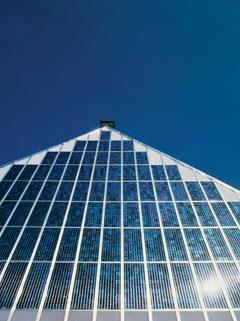 And what of Kirchhoff? Although he continued to collaborate with Bunsen, he remained more interested in studying cosmological spectra than those from minerals. He identified 30 elements in the Sun, and along with others, laid the seeds of modern astronomy.

Spectroscopy has developed well beyond the confines of the visible spectrum and the study of elements alone, and is an important tool in physical and chemical analysis today.

We thank Dr Sibylle Lachner for help with the translation of Carl Setterberg's account of his isolation of caesium metal.

Exactly who should be credited with the introduction of spectroscopy as a chemical tool is still being disputed.8

How does one achieve fame for the discovery of an element? Do you have to spot its presence as compounds, or do you have to isolate a sample of it in an uncombined state? Textbooks and web pages dealing with caesium give scant mention to Setterberg, if he's mentioned at all. Bunsen, and to a lesser extent Kirchhoff, get all the honour. 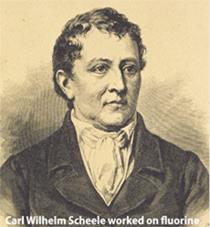 Caesium's story can be contrasted with that of fluorine. Although earlier chemists had suspected that there was something mysterious and unique about fluorite ores (notably that on treatment with mineral acids they yield a vapour that etches glass), it was Carl Scheele who advanced fluorine's chemistry. A textbook published in 1831 records:

In the year 1771 Scheele published a set of experiments on fluorspar. He showed that the  mineral was a compound of lime, and of a peculiar acid, to which he gave the name fluoric acid. He determined the properties of this acid and showed it to differ from every other previously known.

By the following year, in 1832, books were including evidence that the atomic weight of the still un-isolated fluorine was 19. But Scheele receives little credit for his work on this element. Fluorine is almost universally attached to the name of the French chemist Ferdinand Moissan, who managed to isolate the free element in 1886. However, Setterberg, who actually isolated elemental caesium is overlooked: the honour for its discovery resides with the chemist who spotted its presence in the form of chemical compounds in Dürkheim spa water...