Mendeleev - the man and his legacy...

Russia's most famous chemist and formulator of the Periodic Table, died 100 years ago. In this article, the first of two to celebrate the legacy of Dmitri Mendeleev, we look at his life and work. 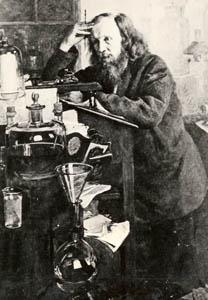 Dmitri Ivanovich Mendeleev the youngest of 14 children was born at Tobolsk, Siberia, 500 miles east of the Ural mountains, on 27 January 1834 (OS*). A double disaster struck the family of teenager Dmitri. First his father, headmaster and literature teacher at a local secondary school, died and then the glassworks owned by his mother Maria burnt down.

Dmitri's mother, however, was an ambitious woman of strong character, and recognising the academic ability of her youngest made his education her priority. In 1849 she took him and two siblings first to Moscow, where Dmitri was refused entry to the college because he was Siberian, and then on to St Petersburg, the capital of Czarist Russia, where she secured a place for him at the pedagogical college where her husband had trained.

Within a year of arriving in St Petersburg Maria died. Dmitri cherished her memory and later dedicated his doctorial research to her:

'conducting a factory, she educated me by her own word, she instructed by example, corrected with love, and to give me the cause of science she left Siberia with me, spending thus her last resources and strength. When dieing she said 'Be careful of illusion; work, search for divine and scientific truth'.

As a young student, Dmitri suffered poor health, possibly tuberculosis, and was unable to attend some of his course. Nevertheless, he was awarded a gold medal at the end for finishing top of the class.

In 1855, at the age of 21, he took a post as a science teacher at Simferopol School on the Crimean peninsula which had a warmer and healthier climate than elsewhere in Russia. However, within a week of his arrival, nearby British landings signalled the onset of the Crimean war, and the school closed. He was transferred to another school, further north, in Odessa, where he decided university research and not school teaching would be his future. 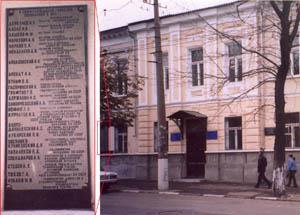 Mendeleev's name is on a list of famous people who worked at the Simferopol School, Crimera

After two years' doctoral research on the interaction of alcohols with water at St Petersburg University (1856-58), the Russian authorities awarded Mendeleev a scholarship to study in Paris under Henri Regnault and in Heidelberg under Robert Bunsen. Under the guidance of Regnault, he spent much time collecting information and making measurements on gases, and with Bunsen he learnt new techniques, notably spectroscopy. He accumulated enormous amounts of data about substances, which he would later try to organise and rationalise. In 1860, together with fellow Russian chemist Alexander Borodin, better known now as a composer, he attended the world's first international chemistry congress at Karlsruhe.1 (Among the delegates were Gay-Lussac, Faraday, Berzelius, Kekulé, Cannizzaro, Odling, Wurtz, Dumas and Fehling.) At this time there was confusion about atomic weights - chemists could not agree whether oxygen, for example, was eight or 16. This confusion centred on the uncertainty surrounding chemical formulae - was water H2O or OH? After the conference Stanislao Cannizzaro, acknowledging the work of fellow Italian Amedeo Avogadro on chemical formulae and valency, produced the most accurate list of atomic weights then known. This work would later prove to be essential to Mendeleev in recognising periodicity.

Back at St Petersburg 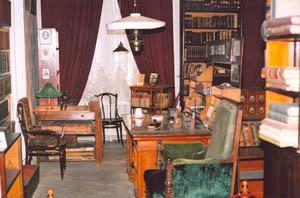 A room at St Petersburg University used by Mendeleev

Mendeleev returned to St Petersburg University, initially as a professor of chemistry in the technological section. Pressurised by his sister, he married Feosva Leshchevayi, six years his senior, and together they had a son Vladimir and daughter Olga. But Mendeleev was a workaholic, his science always came before his marriage, and his wife lived mainly alone with the children at an estate near Moscow, some 400 miles away.

In 1867 Mendeleev was appointed to the chair of inorganic chemistry at the university, and finding no suitable textbook for his students he wrote his own - Osnovy khimii (Principles of chemistry), which ran to eight editions, some of which have been translated into English, German and French.2 Mendeleev had a set of rooms at the university which provided living accommodation as well as working space. (Today these rooms are filled with furniture, mostly from the family, chemical apparatus, paintings and books, some bound by Dmitri himself.) Fairly remote in Russia Mendeleev was unaware of other chemists' attempts, including de Chantcourtois, Newlands, Odling, Hinrichs, and Lothar Meyer, to organise the elements discovered so far. Meanwhile he continued to collect information about each element and wrote this down on separate cards. On 17 February 1869 (1 March in our Gregorian calendar) while arranging the cards in a way similar to playing a game of patience, he suddenly saw an emerging pattern of repeated properties when elements were listed in increasing weight order. This he initially called the Periodic System but in an improved version in 1871 he referred to it as a Periodic Table. (In Russia today it is often referred to as the Mendeleev Table.) The first public announcement of the Periodic System came a month later to the recently formed Russian physicochemical society by Professor Menschutkin because Mendeleev was ill. Later that month a summary about the Periodic System appeared in the German periodical Zeitschrift für Chemie (see Box 1).2

Mendeleev's Table was superior to earlier tables in two important ways. First he amended the atomic weights of some elements to place them correctly in the Table with properties related to adjacent elements, particularly in the same column. Secondly, he left spaces for yet to be discovered elements whose properties he boldly predicted. Nevertheless, Mendeleev's Periodic System, an idea from a distant land, was not initially accepted by other chemists.

Amendments to the Table

There were two reasons for some atomic weights to be amended - either they had been assigned the wrong valency or they had unusual isotopic abundances.

Classical atomic weights were determined from the relationship:

The combining weight was measured experimentally to an accuracy of ca ±0.2 but this precision was wasted if the wrong valency was used. In the case of beryllium, for example, its combining weight was 4.5. Chemically it resembled aluminium, having a white amphoteric hydroxide, and so it was assigned a valency of three, and thus an atomic weight of 13.5 (3 × 4.5). Mendeleev pointed out that there was no space for an element between carbon and nitrogen, but with valency of two it would fit above magnesium. Thus beryllium was correctly placed by an atomic weight change. Similar situations occurred with uranium and indium.

We now know that elements are ordered in increasing atomic number and not atomic weight, but fortunately for Mendeleev and other contemporary chemists there are only three cases (Ar-K, Co-Ni and Te-I) among stable elements where the two orders differ. In 1869 argon was unknown, and Co and Ni had chemical properties and atomic weights so similar that it was not a problem that Ni preceded Co.

In 1875 Frenchman Emile Lecoq de Boisbaudran, by using the then new technique of spectroscopy, discovered a new element, which he called gallium. Details of gallium's properties reached Mendeleev who realised this was his 'eka-aluminium', ie one following aluminium. Table 1 lists the amazing similarity between the predicted and discovered elements. Mendeleev even suggested that the Frenchman had an incorrect value for the density of the element. This confidence, bordering, some thought, on arrogance, was shown to be justified when the gallium sample was purified. From this time chemists started to believe in the Mendeleev Table and began to use it in their search for new elements. Within a decade, two more of Mendeleev's predicted elements had been discovered - scandium by Nilson in 1881 and germanium by Winkler in 1886. 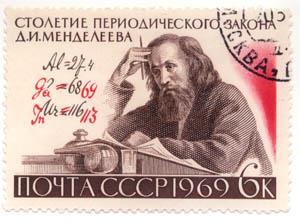 With increasing acceptance of the Periodic Table, Mendeleev began to receive invitations to speak or receive honorary degrees from abroad, including the US, western Europe and Great Britain (notably Cambridge).3 He spoke on Solutions of alcohol and water at the 1887 British Association annual meeting in Manchester also attended by Lothar Meyer with whom in 1882 he had shared the Davy medal of the Royal Society for their work on periodicity.

Mendeleev visited London again in May-June 1889 when he addressed the Royal Society, and spent a few days with Ludwig Mond and William Ramsay before a telegram told him of the illness of his young son. Mendeleev immediately set off for home and his Faraday lecture The Periodic Law of the chemical elements was read by Professor Armstrong to fellows of the Chemical Society at the Royal Institution.4

The Periodic Table established Mendeleev's national fame as a scientist and his interests widened beyond chemistry. He visited oilfields in Pennsylvania to gain knowledge for increasing the efficiency of oil extraction from Baku in southern Russia. He gave scientific advice on various agricultural projects and even went up in a hot-air balloon to get a better view of a total solar eclipse.

By 1880 Mendeleev had been separated from his wife for over 10 years. He then met his niece's closest friend, Anna Popova, a young music student, who captivated him and developed his interest in the Arts. Despite opposition from her parents and the Orthodox church, and the initial unwillingness of his estranged wife to permit divorce, he married Popova in 1882. They had four children, including twins.

Mendeleev's chemistry lectures were well attended, he was after all famous. In 1890 the students were unhappy about regulations imposed on them by the authorities - compulsory uniform, increased fees etc. Mendeleev's socialist leaning and the effect of a young wife led him to present the students' petition to the Public Enlightenment Department. Whether he was dismissed or resigned because of this is uncertain but the outcome was the same - he left St Petersburg University.

Two years later Mendeleev was appointed director of the Bureau of Weights and Measures in St Petersburg where he controversially employed women in responsible positions. He visited western Europe several times in connection with setting standards demanded by his appointment. His statue stands outside the Bureau building which has on its wall a giant Periodic Table erected in 1934 to mark the centenary of his birth.

In 1895 Ramsay discovered argon in the air with molecular weight about 40. At first Mendeleev disputed the discovery since there was no gap in his Periodic Table to be filled at either 20 or 40 (depending on whether the gas was diatomic or monatomic). He suggested it might be N3, akin to O3, with a molecular weight of 42. However his attitude changed when Ramsay reasoned that there must be a whole group of unreactive gases between the halogens and the alkali metals and then began to identify them. 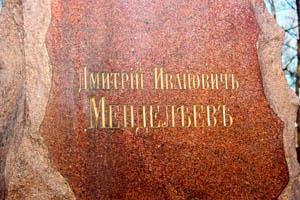 The annual award of Nobel prizes started in 1900 for which priority was to be given for recent work. Despite the 35 years gap since his best work Mendeleev nearly won the 1906 chemistry award.5 There was no second chance because he died in St Petersburg on 20 January 1907 (OS) while Anna read to him Jules Verne's Journey to the North Pole. Students carried a Periodic Table aloft at his State funeral. He is buried near his mother in Volkova cemetery at St Petersburg. His tombstone merely gives his name, Dmitri Ivanovich Mendeleev.

Gordon Woods can be contacted at 3 Peterborough Avenue, Oakham, Rutland LE15 6EB or by e-mail (enquiries@scienceshirts.co.uk).

Concerning the relation between the properties and atomic weights of the elements. D. Mendeleev, March 1869.2

Some typical properties of an element can be predicted from its atomic weight.