As this year saw the filling of the remaining four gaps in the periodic table, Sam Tracey visited Lawrence Berkeley National Laboratory to find out how to make a new element 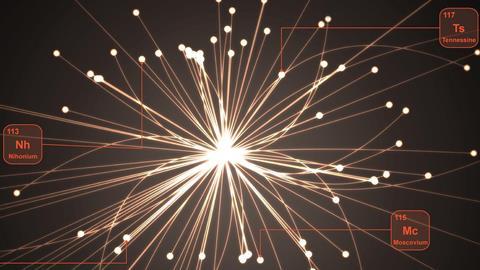 Taking pride of place in almost every chemistry classroom in the world is the periodic table. And this year, Mendeleev’s invention became more beautiful than it has ever been.

When Mendeleev published the table in 1869, it held 63 elements. But perhaps the most brilliant thing about it was that it also contained gaps. The filling of those gaps with newly discovered elements was the reason it gained acceptance. 150 years later it remains the most used theoretical tool in the chemist’s arsenal. But one set of gaps is particularly interesting: the infinitely long list of elements awaiting discovery at its end.

In the 1930s, technetium became the first element to be created rather than discovered. Indeed, its name is derived from the Greek word for artificial. But about 30 years later, naturally occurring samples of the metal were discovered. In 1944, curium became the first truly synthetic element – an element that does not exist naturally on Earth. It was produced by bombarding plutonium with alpha particles.

Over the next decade, the number of synthetic elements grew by another 10 to increase the size of the periodic table to around 100. Most of the atoms of these short-lived elements made by humans may be the only ones of their type to ever have existed in the entire universe.

Each decade that followed saw more elements added, though their synthesis became increasingly difficult. This year saw the recognition of the latest four elements, with atomic numbers 113, 115, 117 and 118. The periodic table now contains no internal gaps. It’s perfect in shape. But will physicists destroy this perfection with the discovery of elements 119, 120, 121?

My colleague Philip Robinson and I travelled to California to meet some of the scientists that make and study these superheavy elements at the Lawrence Berkeley National Laboratory in San Francisco, US. They explained to us how the elements are made and identified, and about the prospect of expanding the periodic table further. 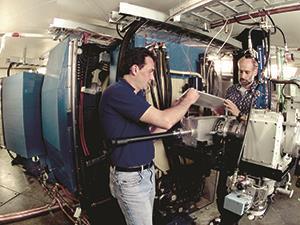 Our host was Ken Gregorich, a leading name in nuclear chemistry. He was involved in experiments that confirmed the discovery of new elements and deepened our understanding of them. Although not recognised as discoverers of the latest four elements, Ken and his colleagues make the elements on a daily basis to conduct further experiments. The machine they use is a cyclotron, like those used in Russia, Japan, and Tennessee in the US to discover the newest four elements.

The cyclotron is a particle accelerator, which was conceived in the 1930s by Ernest Lawrence after whom the Berkeley laboratory and the element lawrencium are named. Its purpose is to smash two elements together with such force they fuse to form a new element with a mass equal to the sum of the two starting nuclei. Cyclotrons were used to produce all the synthetic elements in the periodic table, namely those with atomic number 95 and above. Several of these elements were discovered using the Berkeley cyclotron and the names of the elements berkelium, californium and americium bear witness to this.

As Philip and I stood on a concrete box the size of a house, Ken informed us we were on top of the cyclotron. Around us were gas bottles, stainless steel chambers, and large electromagnets. This equipment creates plasmas of particular ions. For example, ions of calcium-48 are used to manufacture the new element with atomic number 115. The ions are multiply-charged and can have a range of charges up to about +10. The ions repel each other, but the electromagnets push them together so they don’t just smash into the walls of their container and neutralise themselves. The ion used needs to be as heavy as possible as it is one of the nuclei that will be fused to make the new element. Just as importantly, it needs to be rich in neutrons since, unlike the lighter elements, the heavy elements need an excess of neutrons if they are to be stable.

Once produced, the source ions are injected into the cyclotron. Here, because they are charged, they are easily accelerated in a circular motion by magnetic and electric fields. Periodically, they are sped up and as they do so, they shift into an orbit of wider diameter. When this acceleration process is complete, the source ions are travelling at speeds in excess of 10,000 km s–1 or about 4% of the speed of light. The ions are then released from the cyclotron in a highly focused beam with a diameter of a centimetre through which 1013 ions pass every second. The particles in the beam collide with the target, which is a sample of the other element involved in the nuclear fusion process that creates the new element.

Ken took us to Cave 1, a windowless room with a long stainless steel tube passing through it, surrounded by magnets and probes. The tube ends with a glovebox holding the target, a disk of titanium foil about 15 cm in diameter, which would be coated with the target material. ‘In the case of element 115, that would be americium-243 in the form of a thin layer of oxide,’ explains Ken. To prevent the heat generated by the beam melting the titanium backing foil, the target is placed on a rotating wheel so that each section has 50 ms to cool down before it re-enters the beam. 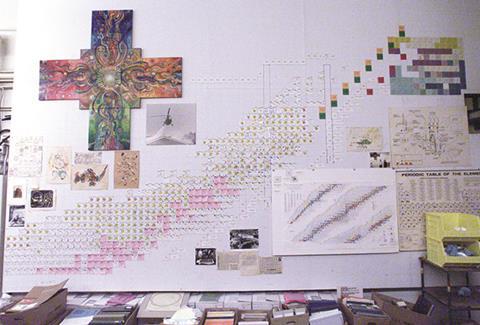 In the Berkeley cyclotron, most of the calcium-48 ions pass straight through the americium oxide/titanium foil and some are deflected. But those in a near head-on collision with americium nuclei do not recoil, despite the huge repulsion they feel at very short distances. This is because the source ions are travelling so quickly that by the time they would have slowed and started to move in the opposite direction, they find themselves so close to the target nuclei they start to feel a new, much stronger attractive force, which only acts over very small distances: the strong nuclear force. And so, rather than bouncing off, they fuse to form a new nucleus with a combined mass of the source and target atoms. In the case of calcium-48 and americium-243 this is 291. The fusion event is very rare; just one in 1018 of the calcium ions that pass through the target foil fuses with an atom of americium. This equates to one atom being separated and detected each day, despite 1013 calcium ions passing through the target foil every second.

The fused nuclei fly off the detector with the momentum of the source ion. But this new element is very unstable. To start with, it is formed in an excited nuclear state, since nuclei can exist in higher energy levels in a manner akin to electrons in their orbitals. Relaxation to the ground state results in the emission of gamma rays. In addition, like all elements with a mass number greater than about 110, the nuclei formed are unstable with respect to alpha decay. They contain so many protons the coulombic repulsion forces the nuclei apart. For the superheavy elements made in cyclotrons, these nuclei last a second or two at most, but their lifetimes are usually considerably shorter. So once they are formed, there is the difficult task of separating individual atoms from the many more source ions, detecting them and proving their identity before they decay. 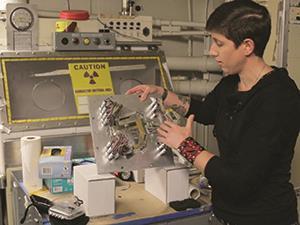 Jackie Gates, a member of Ken's team, showed us a piece of equipment that looked like it had been taken out of a space satellite. ‘This is our focal point detector. It allows us to see that one atom of whichever element we’re looking for,’ she says. The detector is made of three silicon plates arranged at right angles to each other, forming three sides of a cube. Jackie explains that after separation from the billions of other particles, the fused atoms pass into the detector and embed into one of the plates.

This can be complicated because the lighter atom left behind can decay further to leave an even lighter element that itself can decay again and again until a stable element is reached. Because the half-lives of radioactive nuclei and the energy of the alpha particles they emit are distinctive, the lighter elements can be identified with certainty. The heavier elements that preceded them can be deduced and one can conclude with near certainty that the heavier elements were indeed formed in the reactor.

In January, Iupac accepted the nominations for names for elements 113, 115, 117 and 118 as nihonium (Nh), moscovium (Mc), tennessine (Ts) and oganesson (Og). The periodic table now stands with no gaps and has eight complete rows. The short half-lives of these elements mean they are unlikely to have any practical use, but their syntheses are still major technological achievements. Studying these elements has added to the understanding of the nuclear structure of atoms. And these projects are training the next generation of nuclear physicists, the people who we will turn to should another tragedy like Chernobyl or Fukushima occur. They will also man the cyclotron for its other uses, such as testing spacecrafts’ resilience to radiation. These experiments are also worthwhile for their inspirational power. Almost everyone learns about the periodic table at school and how it lists all the elements that exist. But those who care to go beyond the prescribed subjects of the school curriculum can see that, for scientists, our knowledge of the universe can be stretched.

So will we see elements 119, 120, 121 and more? Part of me hopes they don’t find elements 119 or 120 soon. I like the new table in its completed state. But Ken thinks these last two elements are possible. Beam intensities are increasing, which means element 120 could be made within the next decade. But the instability of the atoms produced increases as the square of the number of nucleons increases, so it becomes harder and harder to make and detect them. There are no suitable targets or ion sources known at this time that would produce elements with atomic numbers greater than 120. Their production will require a new technology and Ken thinks they are unlikely in the foreseeable future. But then he adds: ‘If you had asked 20 years ago if we would be making almost 100 atoms of element 115, we would have said “no, there’s no way”, but we’re doing it. So, 20 years from now, who knows?’