Observing chirality and the ‘handedness’ of sugar 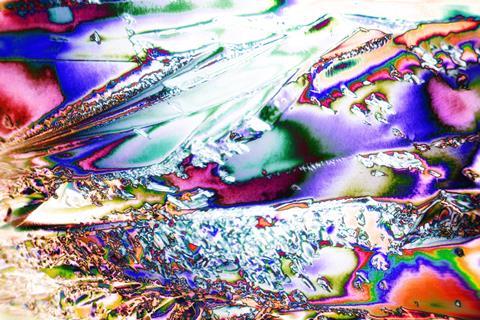 The first inkling of the existence of a molecular property called chirality came in 1832 when French scientist Jean-Baptiste Biot observed that solutions of tartaric acid crystals were able to rotate the plane of polarised light. Tartaric acid is responsible for some of the tartness in wine and its crystals can sometimes be found on wine corks.

Although the compounds were chemically identical the difference in optical activity convinced Louis that there was a difference between them. When he made crystals of paratartaric acid and examined them under a microscope he found that he could distinguish two types of crystal, one the mirror image of the other. This way of assessing crystals was not unusual before the invention of x-ray crystallography in the early 1900s.

By painstakingly sorting the crystals manually Louis was able to show that paratartaric acid was a mixture of two forms of tartaric acid. A solution of one rotates the plane of polarised light in one direction and a solution of the other rotates the plane of polarised light in the other. The only difference between the molecules that make up the two different crystals is that one is the mirror image of the other – just like our hands. Molecules that have this property are called chiral (from the Greek word for hand).

Table sugar (sucrose) is also optically active. If polarised light is shone through a solution of sucrose the plane of polarisation will be rotated clockwise. It is possible to demonstrate this at home using lenses removed from a pair of readily available polarised sunglasses, a torch and a drinking glass.

Polarised lenses are able to block out one of the planes of light emitted by the sun or light bulbs. If you place a liberated lens in front of the torch beam it will become polarised. If you then rotate the second lens slowly in front of the stationary first lens, you will find the point when the amount of light making its way through both the lenses is minimised (the top lens looks very dark). At this point the two filters are at 90° to each other and the polarisers are said to be crossed. If you keep rotating, you will see that more light is able to travel through the second lens again.

Next take a solution of sucrose in a drinking glass and put it between the lenses – ensuring the lenses are position where cross polarisation was achieved. You will see that some of the light is able to travel through the second lens again. This is because the optically active sucrose has rotated the light’s plane of polarisation. If you now turn the second lens once more, you will be able to find the point where the light travelling through the lenses is again minimised. You can take photographs of this phenomenon by using a polarising filter on the camera as your second lens.

The size of the rotation depends on the amount of material the light passes through so it is best to use a very concentrated solution of sucrose. Glucose (or dextrose) and fructose (fruit sugar) are also optically active but fructose rotates the plane of polarisation anti-clockwise instead.

What are the best conditions for growing the biggest crystals? Follow the instructions to grow your own crystals, analyse the data and share your results with the Global Experiment.

What are the best conditions for growing the biggest crystals? Follow the instructions to grow your own crystals, analyse the data and share your results with the Global Experiment (http://rsc.li/1u5VQCQ).