In this article from our ‘Avogadro’s lab’ series, Stephen Ashworth admires the magnificently ordered structures of crystals 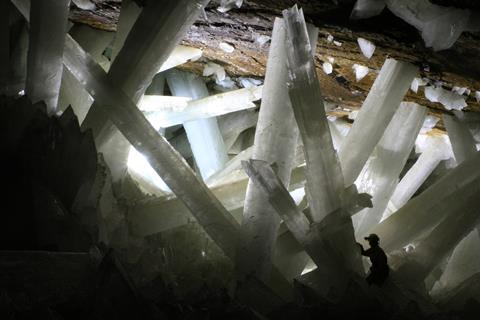 Enormous gypsum crystals in a Naica cavern, found during mining. Note the person in the bottom right for scale.

Crystals are beautiful. The word ‘crystal’ may first bring to mind gemstones, whose rarity and appearance make them very precious, but there are exquisite crystals all around us. Salt and sugar can both form crystals, as can ice. Under the right conditions crystals can become very large indeed. A working mine in Naica, Mexico, hosts the largest crystals in the world. They are crystals of the mineral gypsum (calcium sulfate(VI)-2-water), and some are over 11 metres long and weigh 50,000 kg.

2014 is the International Year of Crystallography, and in recognition of this the Royal Society of Chemistry’s Global Experiment aims to discover the best conditions for growing the biggest crystals of a range of everyday items including sugar, table salt and Epsom salts. Find out how you can join in and grow your own crystals (see box).

Crystals have regular patterns of atoms which repeat in all directions. Crystallography has become important in chemistry as a tool to determine the arrangements of atoms in a crystal.

When x-rays were discovered there was no way of manipulating them. There were no lenses or mirrors that would work with x-rays, unlike visible light. German physicist Max von Laue soon realised that the size of atoms meant that the regular patterns of atoms in crystals could be used to manipulate x-rays. He showed that crystals could diffract x-rays. Diffraction is the principle which was used in Avogadro’s lab in November 2013 to make a spectroscope. In the spectroscope, diffraction from a DVD separated the colours of visible light. Von Laue showed that crystals could do the same for x-rays.

It was the British father-and-son team William Henry and William Lawrence Bragg that used this to determine where the atoms were in crystals. They shone x-rays of one wavelength at a crystal and used the pattern formed by diffraction from different planes of atoms to work out where the atoms were in the crystal. The first structures that were solved were simple, such as sodium chloride, but with the development of technology and computer power it has become routine to work out the crystal structures of large, complex molecules such as proteins and enzymes. 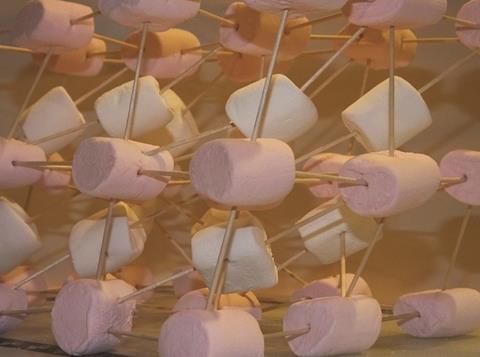 Visualise the regular structure of a crystal using pink and white marshmallows!

The regular structure of a crystal can be visualised using three packets of pink and white marshmallows and a packet of cocktail sticks. The marshmallows represent the atoms, and the cocktail sticks the bonds between them. First build a cube with a pink marshmallow at each corner, then extend it with more sticks and pink marshmallows to represent the structure of a crystal lattice. It does get a bit wobbly but the planes of atoms at different angles which are responsible for the x-ray diffraction can be seen.

Of course putting several marshmallows on a kebab skewer would produce a rather more stable structure. Also if these crystals were made outside the lab, disposal would be very easy – eat them!

What are the best conditions for growing the biggest crystals? Follow the instructions to grow your own crystals, analyse the data and share your results with the Global Experiment.

What are the best conditions for growing the biggest crystals? Follow the instructions to grow your own crystals, analyse the data and share your results with the Global Experiment (http://rsc.li/1u5VQCQ).