Should we be worried by the pandemic this autumn and winter? 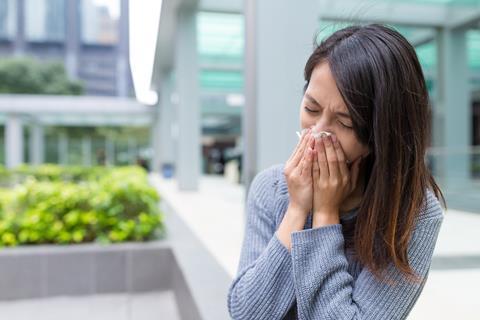 On 11 June 2009 the World Health Organisation officially declared a pandemic of swine flu following 30 000 cases in more than 70 countries. By August the number of new cases reported each week had peaked at 110 000 and there had been 36 deaths in England, but for most sufferers the symptoms seem to have been mild. So should we be worried by the pandemic this autumn and winter?

This year’s outbreak of a new strain of influenza, more commonly known as swine flu, is the latest episode in the long history of mankind’s struggle with this continually changing virus. To determine the threat this new outbreak poses as we enter the peak flu season we need to consider the chemistry of the virus, the historical precedent for pandemic flu and the drugs available to treat the illness.

Influenza is a highly contagious viral infection which causes fever, shivering attacks, muscle aches, headache and sore throat. The illness rarely lasts for more than three days and recovery is usually rapid, though there may be associated respiratory infections. The most serious of these is pneumonia, a bacterial inflammation of the lungs which if left untreated can be fatal particularly for the young and elderly.

The influenza virus has a diameter of ca 0.1 μm (1 × 10–7 m) and is essentially a spherical, protein-based envelope containing genetic material (ribonucleic acid – RNA). On the surface of the virus particle are two protruding proteins (antigens). These are haemagglutinin (HA), which is a glycoprotein (ie a protein with attached sugar chains), and the enzyme neuraminidase (NA). Each flu particle is covered by ca 2000 HA and 500 NA spikes and these two proteins have key roles in the life cycle of the virus as it infects a host cell to replicate itself.

Haemagglutinin attaches the virus to the surface of the host cell by binding to specific sugar chains, in particular neuraminic acid, on proteins on the cell surface. Once bound, the virus membrane fuses with the host cell membrane incorporating the particle into the cell. A subsequent fall in pH within the cell results in a change in the three dimensional structure of HA, which causes the virus to rupture and release its viral RNA. This genetic material is then used by the cell to make new copies of the virus.

The structures of HA and NA can differ subtly from virus to virus. At present, at least 16 discrete subtypes of HA (H1–H16) and nine forms of NA (N1–N9) have been identified in Nature, some in people, but most in viruses affecting aquatic birds. These subtle variations and the possible HN combinations (144 in all) determine the type of virus (eg H1N1, H3N2, H5N1) and whether it attacks humans. The swine flu virus is a novel strain of H1N1, one of only a few combinations that are capable of infecting humans and causing a pandemic.

The world is better prepared for an influenza pandemic…

What is pandemic flu?

A pandemic is an outbreak of a new infectious disease that can spread easily among humans and is prevalent across a country, continent, or even worldwide. The influenza pandemic of 1918–19, which rates as the greatest pandemic of all time, caused more than 20 million deaths around the world in less than two years. The high mortality associated with this pandemic (>2.5 per cent) was caused by pneumonia, which so often followed the initial infection. This condition was sometimes caused by the influenza virus itself, which reproduced especially well in the lungs, but was more often the result of infection by the bacterium Streptococcus pneumoniae. This invaded the already damaged lungs and produced a sudden inflammatory condition, which led to respiratory collapse and death. With the availability of modern antibiotics, the likelihood of a similarly high mortality rate from bacterial pneumonia in any new pandemic is unlikely.

The influenza strain of 1918 appears to have been particularly virulent because it had an HA protein that was especially well adapted for human-to-human transmission along with a NA enzyme that allowed for efficient release of new virus particles. This allowed the virus to infect and spread rapidly throughout communities, limiting the opportunity for people to develop immunity to the illness.

Transmitted through air by coughs and sneezes or through contact with contaminated surfaces or body fluids, influenza viruses circulate widely in the human and animal (birds, pigs etc) environment and different strains are adapted specifically to cause disease in their hosts. However, if strains of the viruses are passed back and forth between hosts there is the potential for a host to be infected with two different viruses at the same time. During this period of infection the viruses can trade genetic material (mutate) which can lead to the development of a novel strain. This is a reason why so many new strains of influenza originate in the Far East, a region of the world where humans live in close proximity to aquatic birds and to pigs.

Although called swine flu, the new H1N1 strain appears to have acquired genetic material from human, swine and avian flu viruses. These genetic components have been combined into the new strain during a period of infection in a North American swine host.

The novel H1N1 strain currently causes infection mainly in the upper respiratory tract, which results in mild symptoms and a fatality rate similar to seasonal flu (0.1–0.35 per cent). However, the behaviour of viruses is unpredictable. For instance, over the next few months this swine flu virus could evolve by mixing with seasonal flu viruses or with the dangerous avian H5N1 virus, which has a mortality rate of >60 per cent. The resultant new strain could be more of a threat to humans during a pandemic and only a vast supply of effective flu treatments would limit its impact on the global population.

Protection from a pandemic

There are several influenza vaccines available, which are used to prevent the disease infecting those at most risk, ie the young, the elderly and those whose immune systems are compromised (eg patients receiving cancer chemotherapy, HIV/AIDs patients etc). Yearly flu vaccines introduce inactive flu strains into the body. This primes the immune system to recognise similar invading viruses, making it ready to fight infection. These vaccines are only useful against the known strains of the virus and the World Health Organisation (WHO) announced in August that a vaccine for the new H1N1 strain is likely to be licensed for use in September. 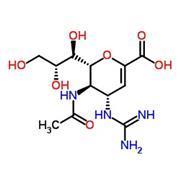 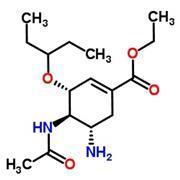 The development of drugs to treat influenza is fraught with difficulties, not least because infection is so rapid. To be effective drugs must either be given prior to any symptoms to prevent infection or immediately after the first symptoms are recognised. Current influenza drug therapy focuses on a family of drugs known as neuraminidase inhibitors. Discovered by a team of Australian chemists, these compounds inhibit the actions of the viral neuraminidase enzyme, which reduces the infectiousness of the virus. In 1993 the Australian research group, led by Mark von Itzstein and Michael Pegg at Monash University in Melbourne, determined the three dimensional structure of the neuraminidase enzyme bound to neuraminic acid using x-ray crystallography. This allowed the team to use computational chemistry techniques to study how the sugar chain fitted into the active site of the enzyme. Using data from these studies, the researchers constructed drug molecules designed to occupy the active site, and thus inhibit the enzyme.

The Australian team prepared several structural analogues of neuraminic acid that were effective neuraminidase inhibitors. One of these was zanamivir (1), a drug which was approved for use in 2000 and is now produced by GlaxoSmithKline (GSK) in the UK and marketed as Relenza. The drug is administered as a dry powder that is puffed into the lungs. However, almost immediately after its launch, Relenza was eclipsed by another neuraminidase inhibitor oseltamivir (2). Produced by Roche and sold as Tamiflu, this drug is taken as a pill. Both drugs reduce the duration of the illness if administered within two days of the first symptoms of influenza.

Antiviral drugs such as Tamiflu will help to control any new pandemic. In addition, the availability of antibiotics will ensure that any associated bacterial infections are treatable. As the WHO has recently stated, the world is better prepared for an influenza pandemic than at any time in history. So as long as the virus does not become dangerously virulent by picking up genes from the highly pathogenic H5N1 avain flu virus, we can be quietly optimistic that there will be no repeat of the disaster of 1918.