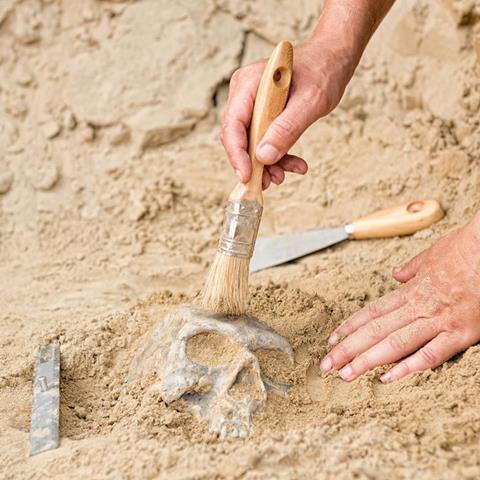 Modern archaeologists have found chemistry to be an indispensable tool

The trails left behind by our ancestors − in the form of artefacts, architecture and cultural landscapes − is all we have to piece together a picture of the past. To do this archeologists work closely with a myriad of different disciplines. ‘I challenge my students at the start of their course to tell me which field of science doesn’t have relevance to archaeology,’ says Mark Pollard, professor of archaeological science at the University of Oxford, UK. ‘Everything from linguistics to genetics to culture studies contributes to it.’

Modern archaeologists have found chemistry to be an indispensable tool. ‘It’s fascinating to work in archaeology which involves so many fields of science, and chemistry’s role in this study is absolutely central,’ says Richard Evershed, an expert on using chemistry in archaeology at the University of Bristol, UK.

‘Archaeology is a destructive science,’ explains Mark. ‘Once you dig up an artefact, you’ve destroyed it. This is why we as scientists have a duty to collect as much information as possible [from each item]. And if there is a question you can ask of a find, there is a good chance chemistry has a role to play in answering it.’ With chemistry’s help, archaeologists can answer many of the most fundamental questions such as how old is it, what is it made of and where does it come from. 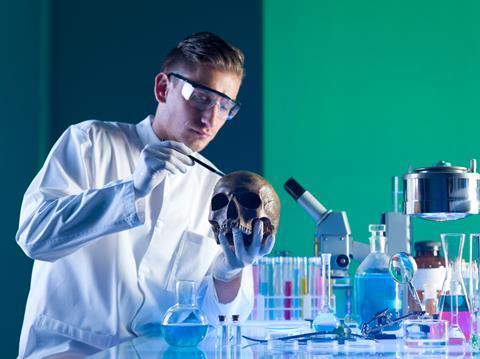 Accelerator mass spectrometry requires only a very small sample of bone to be removed for carbon dating, minimising the damage to a specimen

The chemistry tool most commonly used by archaeologists is carbon dating. This technique measures two isotopes of carbon – carbon-12 and carbon-14 – that occur in the atmosphere in roughly constant proportions. Isotopes have the same number of protons but different numbers of neutrons. While plants and animals are alive they maintain the same proportion of these two carbon isotopes in their tissues as that in the atmosphere. But when they die, the less stable one − carbon-14 − decays at a constant rate. Measuring the proportion of carbon-14 remaining in an artefact using an accelerator mass spectrometer therefore allows an approximate age to be obtained. To fine tune this date, the small fluctuations in the ratio of carbon-14 to carbon-12 that occur in the atmosphere over time are considered. These atmospheric ratios have been calculated going back thousands of years.

This approach is limited, however, as the radioactive decay of carbon-14 can be recorded going back only to about 60,000 years ago. And even with the fine tuning, the date is not completely accurate, and so complementary approaches have been developed. ‘Usually a combination of different dating techniques can help make a more precise estimate,’ says Mark.

Another dating technique that relies on the phenomenon of chirality is however suitable for samples older than 60,000 years. Just like a human’s left hand is a mirror image of their right hand, some chemicals show such handedness. Amino acids, for example, are nearly all left handed. While an organism is alive, the amino acids in their body are continuously refreshed and retain their handedness. But after death, they begin racemising, which is the process by which the proportion of the other handed molecules increases until the mixture eventually contains an equal proportion of left and right handed molecules. The ratio of these chiral molecules can therefore reveal an artefact’s age.

Chemistry can also help archeologists discover what an artefact was used for, and in doing so unearth fascinating stories about our past. Until approximately 7000 years ago most humans are thought to have been lactose intolerant, meaning that consuming milk led to adverse effects such as bloating. But when cattle, sheep and goats became domesticated, there would have been considerable economic and nutritional gains from drinking their milk. This is thought to have led to evolutionary pressure forcing changes in the human genes that made people lactose tolerant.

Until recently this theory was solely based on DNA analysis of ancient humans carried out in the 1980s. More proof was needed to show that early humans actually consumed milk. And, finally, in 2008, Richard and his colleagues found evidence proving that humans were using pottery to cook or store milk 8000 years ago.

Because pottery at the time had no glazing, foodstuffs cooked in them became trapped in the tiny pores of the earthen material. Using gas chromatography-combustion-isotope ratio mass spectrometry, Richard’s team measured the carbon isotope ratios in lipid residues trapped in hundreds of ancient pottery shards and proved that they had contained milk. The technique relies on the fact that the ratio of carbon-13 to carbon-12, both stable isotopes of carbon, is different for dairy fats compared to animal carcass fats.

In 2012, the same team applied similar techniques to strainer-type vessels recovered from central Europe that were about 6000 years old. The presence of dairy fatty acids was found in them too, and it indicated that by that time humans had learned to make their own cheese. ‘No cheese-biomarker molecules were recovered, but the finding of milk fats in prehistoric ceramic strainers, vessels like those used today for cheesemaking, could only mean cheesemaking was involved,’ says Richard. 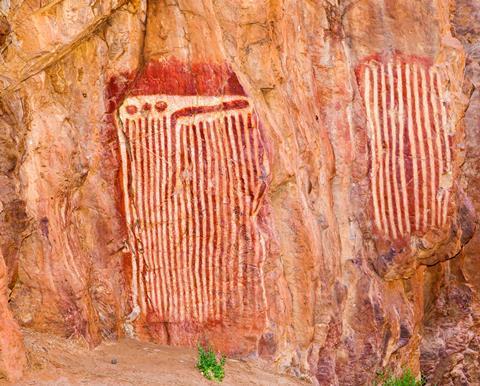 Unveiling the contents of artefacts can also lead to fascinating insights into early trade routes and human migration. Rachel Popelka-Filcoff, a chemist at Flinders University in Australia, has spent most of her research career focusing on the analysis of ochre. This pigment is found in Australian Aboriginal objects dating as far back as 40,000 years. Ochre, however, comes from many different mines found throughout Australia and continues to be a culturally significant material today. By using analytical chemistry techniques, this research has revealed a slice of the history of Aboriginal Australia.

Her team’s analysis revealed that each ochre mine had a different chemical signature. While most of the pigment is mostly made of iron oxide, there are many more elements present in tiny quantities as impurities, which vary from mine to mine. Neutron activation analysis was Rachel’s technique of choice. This technique involves firing neutrons at the samples. When atoms absorb neutrons they usually form radioactive isotopes that give a characteristic decay pattern. The decay patterns can be analysed to reveal the proportion of each element in a sample. Using this technique she could mark each mine and find out which mine the ochre in a particular object comes from. Because ochre was traded between groups, this information could be used to figure out trade routes that existed among Aboriginal Australians at the time.

Chemistry can also reveal details of past migration of humans and other animals. For this, archaeological chemists use the element strontium as a geochemical signature. Its isotopes, strontium-86 and strontium-87, are present in unique ratios in all the rocks throughout the world. They move from the rocks, into the soil, and then into the food chain and water supply. Once inside the human body, they accumulate at two places: tooth enamel and bones. But this happens at different times. Tooth enamel is formed during childhood, whereas bones grow throughout a person’s lifetime. So analysis of teeth and bone from the same animal can tell you if that animal migrated between childhood and death, and sometimes even pinpoint where it was born. There are a number of researchers working in this area, including Alex Bentley also at the University of Bristol.

‘In archaeology, chemistry is usually just the beginning of revealing the past, not the end,’ says Mark. An illustrative example comes from Richard’s work.

In 2002, during excavations in Qatna, Syria, archaeologists found a royal tomb that had remained hidden since the destruction of the overlying palace in 1340 BC. When Richard and his team visited, they took back samples of soil covering the tomb floor for analysis. The chemical analyses of soil extracts involving high performance liquid chromatography, nuclear magnetic resonance spectroscopy and mass spectrometry, surprisingly, revealed that the sediments contained traces of brominated derivatives of indigo and indirubin, indicative of the dye royal purple (also known as Tyrian purple). Richard’s team had struck upon, possibly, one of the oldest uses of the dye. But the story needed more proof to be sure that the dye was indeed used on textiles in this tomb. So the archaeologists went back in search of remains of fabric in the tomb, and were able to locate microscopic fossilised remains of textiles coloured with royal purple.

All these examples show that chemistry’s role in archaeology is an important one. ‘Chemistry brings rigor to archaeology,’ says Richard. ‘With its tools, we can precisely measure molecular and isotopic fingerprints of various phenomena, and many times unambiguously describe what happened thousands of years ago.’

Akshat Rathi is a science writer based in London, UK