Poisoned or not? Napoleon’s death 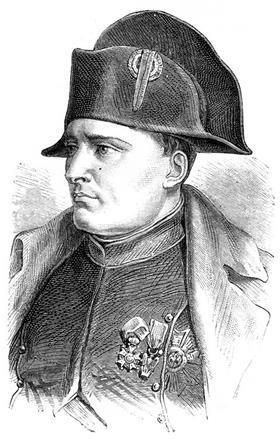 Napoleon Bonaparte suffered for years with a digestive condition that produced agonising pain leading up to his death in 1821. The cause of death was recorded as stomach cancer.

At the time Napoleon was being held by the English on Saint Helena. Foul play was suspected and arsenic named as the poison. Such poisoning was a distinct possibility as it would have produced symptoms identical with those of stomach cancer.

In those days there was no means of detecting arsenic in the body and many people are thought to have ‘conveniently’ died of food poisoning. Fortunately, a sample of Napoleon’s hair was retained and recently this was analysed and the presence of arsenic confirmed. How was this determined?

Arsenic poisonings actually refer to highly toxic arsenic trioxide  (As2O3) rather than the much less poisonous element itself. In years gone by, arsenic was commonly used use for fly-papers, pigments, cosmetics and even medicines. For example, in the eighteenth and nineteenth centuries Fowler’s Solution – a tonic containing one per cent arsenic trioxide – was a favourite among men as it was thought to be an aphrodisiac. This household use resulted in many people dying due to accidental poisoning.

Today, the belief that Napoleon was poisoned persists. Arsenic’s colourless and odourless properties made it a popular poison for sneaking into a victim’s food or drink. With sufficient care in administering it, the poisoner could be reasonably confident that his crime would go undetected.

Arsenic in the body’s chemistry 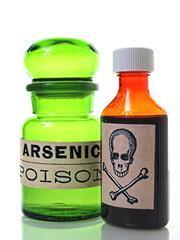 Arsenic forms strong bonds with amino acids that contain sulphur and so can become locked into proteins or interfere with the workings of enzymes. Where the toxic effect of arsenic is limited and the recipient continues to live, much of the arsenic will be excreted, although arsenic incorporated in the structure of hair and nail proteins will remain as a record until lost by normal growth or cutting.

Hair is especially stable and will remain chemically unchanged for centuries – even millennia in the right conditions. It is this permanence that is so beneficial for forensic analysis many years after the death – as in our Napoleon example. Hair grows at the rate of 10–15 mm per month. As the growth proceeds, the arsenic record formed can be quite precise in terms of when the person received a dose.

Until the English chemist James Marsh demonstrated his test for arsenic, small amounts of arsenic could not be detected. Marsh’s test played a key role in confirming the cause of death in an 1836 murder trial and represented a major step in the application of chemistry to crime investigation.

Today we have many techniques for arsenic analysis. Outstanding among them is Neutron Activation Analysis (NAA). Recently NAA was used at Harwell, Oxfordshire, to analyse samples of Napoleon’s hair that had been preserved, samples taken just after his death and earlier samples from while he was still alive.

The truth of Napoleon’s death may never be known. NAA showed that Napoleon was not just exposed to high levels of arsenic in the period leading up to his death, as might be expected by those proposing the arsenic poisoning theory. In fact samples from many years prior to his death contained alarmingly high concentrations of arsenic interspersed with low concentrations.

Was it that Napoleon had taken medication such as Fowler’s Solution? Perhaps he was dosing himself with arsenic to build up a resistance to it to try and foil any attempt to poison him – long-term exposure to arsenic develops tolerance.

Focusing upon his living conditions on Saint Helena, we note that his room was decorated with wallpapers that had a pattern printed with a pigment known as Scheele’s Green, a green insoluble compound copper arsenite (CuHAsO3).  While on dry wallpaper Scheele’s Green is not a problem. However, if the wallpaper becomes damp – and Saint Helena is a particularly damp place – the compound reacts and produces cacodyl (trimethyl arsenic, As(CH3)3) and a serious problem arises. For a start, cacodyl is volatile so it evaporates from the wallpaper and fills the room, and unlike the solid pigment copper arsenite cacodyl is much more toxic. Any occupant that spent any length of time in the affected room would inhale the cacodyl and absorb high doses of a treacherously poisonous compound.

It may well be that Napoleon did die of stomach cancer but suggestions of arsenic poisoning are plausible. However, if arsenic poisoning was the culprit it was highly likely to be unintentional and due to inhalation and absorption of cacodyl from the wallpaper. Of course, if Napoleon did die from stomach cancer the cancer could also have been caused by arsenic since arsenic and its compounds are carcinogenic.

The above account usefully shows the application of modern analysis in the investigation of a situation that may turn out to be murder. However, what is also demonstrated here is that having a set of results does not lead us directly to a conclusion. As is often the case there may be many alternative explanations that fit the facts.

Analysis for arsenic. From laboratory wet method to nuclear reaction

Marsh’s test is highly sensitive. In it, arsenic compounds react with nascent hydrogen formed by the reaction of zinc in acid. The arsenic and hydrogen form arsine (AsH3) and this gas is passed through a small tube that is heated. Heating results in thermal decomposition of arsine to yield arsenic, which deposits as a stain inside the tube.

The size of the arsenic stain gives a semi-quantitative figure for the amount of arsenic when the procedure is run alongside standards with known amounts of arsenic.

This test is very specific for arsenic. 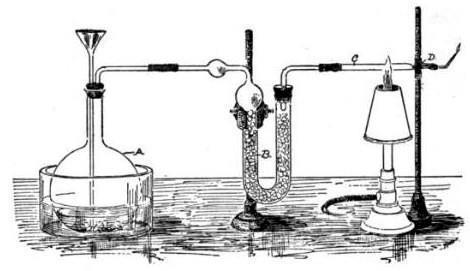 Marsh test apparatus (featured in An Introduction to Chemical Pharmacology)

This is one of the most sensitive methods available. NAA can determine the concentration of elements in large amounts of material. The method is non-destructive, so historical artifacts can be analysed without harming them.

When analysing a sample using NAA, neutrons bombard the sample and interact with stable isotopes of the target element, converting them to radioactive nucleii. A compound nucleus is formed which rapidly decays by a well studied decay path. The standard emissions that form this decay are particular for a specific element and can be detected. This means that the nuclei  present can be identified.

However, although NAA is non-destructive, the technique leaves the sample radioactive for years afterwards, requiring special handling and storage.