Michael Seery turns the traditional teaching ladder on its side, and suggests that context-based learning may better suit students’ needs

All of us who teach chemistry know the wonder of our subject. Chemistry is central to designing new medicines, developing new sources of energy and analysing contaminants in our food chain. An understanding of chemistry is required to address major issues facing humanity, such as global warming and clean water supply. It truly is the central science. 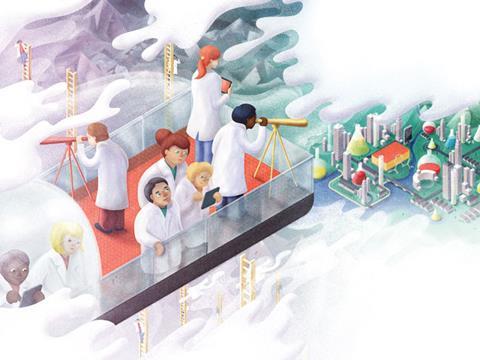 When we look at our curricula at school and university levels, little of this richness is apparent. The subject is taught in discrete chunks of facts, often disconnected. Chemistry syllabuses have been described as being like a ladder, with rungs representing information. We seem to insist that students must climb each rung of the ladder before getting to the top, before they can see the point of it all. It’s no surprise then that numerous research studies have found that students have difficulty relating concepts and think chemistry is disconnected from everyday life. In addition, there is a logical flaw with our content dominated approach. The French philosopher of science Henri Poincaré once wrote that ‘science is built up with facts, as a house is with stones. But a collection of facts is no more a science than a heap of stones is a house.’ What elevates science from being a collection of facts is the knowledge of how to apply these facts to new situations.

Context-based learning (CBL) is an approach that turns these ladders on their side, so they become supports for a platform representing a context. Students are presented the everyday relevance, or context, up front. The teaching of chemistry necessary to understanding the context emanate from this, reaching into appropriate topics, as required. Considered this way, the CBL approach has several benefits. It shifts away from overloading curricula with content, with a focus on rote memorisation of isolated facts. There is an emphasis on how we know information instead of what we know. Armed with knowledge of these facts as a result of completing the context, as well as a knowledge of how the context problem was addressed, students can develop the ability to transfer what they know to unfamiliar scenarios – the ‘how to’ aspect of scientific enquiry, currently missing from our curricula. Finally it shifts the emphasis away from isolated facts to joining up ideas as applied to interesting and engaging real-world scenarios, making it more relevant to students and ridding us of the scourge of a curriculum whose sole purpose is to prepare students for the next stage of the curriculum.1

How does CBL manifest itself in practice? One of the challenges is to develop a suitable context that covers appropriate parts of the curriculum in an engaging and relevant way. Luckily there are a large number of books, articles and resources describing the implementation of context-based learning at school and university level.

Ilka Parchmann, at the University of Kiel, Germany, and co-workers have described an approach to the design and implementation of CBL resources so that chemistry concepts are not overwhelmed by the context. The design process begins with an area of chemical content, for example chemical bonding in organic chemistry.2 Within this content, there are concepts, such as electronegativity, polarity and solubility. When defining topics for use in the context-based scenario, the teacher can then be clear about what components of the curriculum are being addressed. An example topic in this case was medical drugs. Students were shown structures of paracetamol, aspirin and ibuprofen. The aim for students was to identify polar covalent bonds as a route to explaining solubility with water.

This example was part of a research study that presented the context to students in three different ways. Students were given a personal context (when you take headache drugs, they need to get into your bloodstream – how do they do this?), a societal context (what chemical properties do headache drugs have that result in them being found in effluent in the environment?) and a professional context (what properties would you include in a drug if you were designing headache tablets?). In general, personal contexts were appreciated most by students, and so  seen by them as more relevant.

In a related activity,3 students were shown the structure of Tamiflu, and asked a similar question about its ability to spread to the environment. As Tamiflu does not contain hydroxyl groups, it meant that students had to think about other possible functional groups that increased solubility in water.

Climate change is the great issue of our age. Resources were recently produced by the King’s Center for Visualization in Science, Edmonton, Canada that enable introductory chemistry to be taught in the context of climate change.4,5 Four lessons are currently available: isotopes, gases, acids and bases, and thermochemistry. For example, the lesson on isotopes opens with the question: ‘How is 800,000 years of temperature data determined from ice core samples?’ After engaging with core concepts of atomic structure and isotopes, students explore a visualisation that allows them to develop a model for how the ratios of 18O/16O and 2H/1H will differ in glacial ice cores depending on the temperature of the earth, and levels of carbon dioxide, at the time of evaporation and precipitation. It’s a wonderful and engaging way to teach this introductory content of atomic structure and allows us to capture our students’ interest early on in a chemistry course. Climate change is also dealt with in a chapter of the book Chemistry in context. The chapter includes chemistry concepts such as molecular shape, the carbon cycle and stoichiometry.6

The Royal Society of Chemistry has invested in the development of 20 context- and problem-based learning resources, and these are available at the Learn Chemistry website. These include entire modules that can be taught over multiple sessions covering a particular curriculum topic.7

One of the early examples of these resources was an introductory physical chemistry module, set in the context of considering energy requirements for an emerging city.8,9 Students play the role of an advisory team working for a project manager for a power consultancy firm (the tutor). The students receive a brief from a head of council, and after discussing sources of energy in the first session, work through the remaining sessions covering a different theme each time. These themes include considering cost efficiencies of fossil fuel combustion (incorporating the Carnot cycle and Gibbs free energy calculations), production of greenhouses gases (incorporating equilibrium constants), hydrogen production (incorporating kinetics and catalysis) and fuel cells (incorporating electrochemistry). The final session sees the groups return to share their findings by oral presentation and make recommendations to fulfil the requirements of the context. Weaving through this implementation are activities required of the students such as making estimations from data, solving problems with real data and making judgements based on findings. This format was adopted for many of the resources subsequently developed for Learn Chemistry.

There’s no shortage of resources on a wide variety of topics of context-based learning. What happens when they are used in classrooms and lecture halls? Do they live up to their promise? Some interesting research studies are available to give further insight.

Work done by Judy Dori, at Technion – Israel Institute of Technology, and co-workers is interesting to note. They investigated the implementation of a contextualised organic chemistry module, called ‘Taste of chemistry’, with a view to examining if it increased scientific literacy, as well as examining the implementation from a teacher’s perspective. The study involved implementing the module over a five year period to over 4000 participants in Israeli schools.10,11 Student performance was measured by comparing results to students completing traditional examinations with those completing context-based exams. The questions in the traditional exams tended to rely on lower order thinking skills (knowledge, understanding, sometimes application) while those in the context-based exams tended to relate to students everyday lives and require higher order thinking skills. It was found that the average score for the context-based exam was the same or higher than the traditional exam, and crucially the failure rate was lower. In the final year of the study, 7.4% of 4072 students who took the context-based module failed, compared to 20% of 4727 students taking the traditional exam who failed. These changes were not without challenges. In particular, teachers needed time to adapt to the new approach; the role now involved much more explaining and reasoning. Nevertheless, teachers reported they could see the long-term advantages of the approach.

Stimulating student interest is also one of the arguments for integrating CBL into our curricula. Katrin Vaino and co-workers at the University of Tartu, Estonia, introduced context-based learning to five teachers and 416 students in Estonian schools, with a view to examining whether students’ intrinsic motivation increased as a result of completed context-based learning studies.12 Students completed a unit on ‘alcohol measuring: could this save someone’s life?’ After setting the scene – how best to measure blood-alcohol levels – students moved on to the second stage of problem solving, which focused on a back-titration of ethanol by iron(II) ions, making judgements on the data found. The study found that students’ intrinsic motivation significantly increased after completing this module. There was particular increase in the responses relating to working with classmates and the inherent interest of the topic. The researchers followed the students in the subsequent year at school, when they had completed several context-based modules, and again demonstrated an increase in intrinsic motivation, with significant increases noted in the need to be self-initiating and the desire to cooperate with classmates.

With any change to our curriculum and how we teach it, it is right to be cautious and consider the implications. Why is there a need for change? What can the proposals offer? How will the changes affect students and be managed by teachers? Context-based learning has an established basis in the Salter’s chemistry curriculum, the US Chemistry in Context curriculum model, the German Chemie in Kontext project and more. There is an ever-increasing number of resources available aligning with different aspects of the chemistry curriculum. Studies illustrated here and many more have documented an improvement in student engagement, performance and interest in the curriculum. The context-based curriculum itself becomes a template for educating students as members of society, informed about issues of importance to humankind such as global warming and clean water supply. Most importantly, context-based learning returns the curriculum to a focus on informed students learning about the process of how we do science.

Michael Seery is a reader in chemistry education at the University of Edinburgh, UK