Radical changes in our atmosphere

Dudley Shallcross and Tim Harrison explain how a breakthrough has allowed us to study Criegee biradicals, and what this could mean for atmospheric science 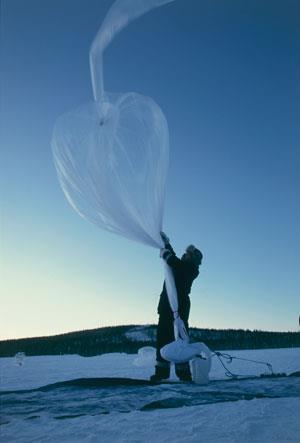 A family of Criegee biradicals, an atmospheric species first postulated in 1949, has recently been detected by an international team of chemists in the US and UK. Criegee biradicals, as their name suggests, can be thought of as having two unpaired electrons on different atoms. These highly reactive – and therefore short-lived – species are formed when volatile unsaturated organic compounds react with ozone. Their discovery may change the way we think about atmospheric chemistry and sheds further light on the mechanism of ozonolysis.

Free radicals are very important in many chemical systems. They can be generated by homolytic cleavage of a covalent bond, where the shared electron pair separates evenly, with one electron going to each of the two molecular fragments. A post-16 level example would be cleaving molecular chlorine to form chlorine radicals, Cl•:

The dot (•) is used to represent the unpaired electron. This reaction is called an initiation reaction and is endothermic – it requires energy to break the bond. This energy could come from heating Cl2 in the gas phase, or from irradiating the gas with light. In this case, the wavelength is in the region of 350 nm. Once formed, the radical can take part in propagation reactions.

In propagation steps, a radical is consumed but at least one new radical is formed, allowing the reaction to continue. If methane (CH4) is present in the gas mixture with the irradiated chlorine, several possible propagation reactions can occur. Most of these involve radical intermediates abstracting hydrogen atoms from methane derivatives to make HCl gas and new carbon-centred radicals, or reacting with Cl2 to generate more chlorine radicals. A selection of the possibilities is shown below:

Therefore, consecutive chlorination can occur until tetrachloromethane (CCl4) is formed. However, these reactions do not propagate endlessly. Eventually, a termination reaction occurs, in which two radicals combine to form a neutral molecule, for example: 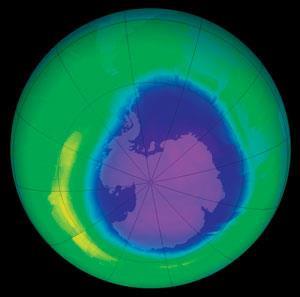 Free radical chemistry regulates ozone levels in the stratosphere. Ozone depletion in the antarctic is visible in satellite imag Shutterstock

Free radical chemistry is very important in the Earth's atmosphere. It regulates ozone levels in the stratospheric 'ozone layer' – and leads to severe ozone depletion in polar regions each spring. Lower down, in the troposphere (the lowest 10 km of the atmosphere) free radicals also drive photochemical smog formation. If a free radical with one unpaired electron reacts very quickly with other molecules, we would expect a biradical, with two unpaired electrons, to react very quickly indeed.

Plants release a wide range of organic molecules, generally termed volatile organic compounds (VOCs), into the atmosphere. We know that some attract pollinators, and some are released when the plant is wounded to attract predators of whatever is eating the plant. But there are many for which we have no explanation.

Among these VOCs are alkenes, with carbon-carbon double bonds. Ozone (O3) reacts with alkenes, and the reaction rate depends on the alkene's structure. The rate is accelerated when there are more alkyl groups around the double bond. For example, the relative ozonolysis rates of ethene, 2-methylpropene, 2-methyl-2-butene and 2,3-dimethyl-2-butene is in the ratio 2:15:500:1250.

Rudolf Criegee and Gotthilf Wenner first proposed in 1949 that ozonolysis of alkenes proceeds through carbonyl oxide intermediates, such as •CH2OO• in the case of ethene. Ozone adds across a double bond to produce a cyclic primary ozonide, which rapidly rearranges to a secondary ozonide, then decomposes to produce a carbonyl and a biradical carbonyl oxide, known as a Criegee intermediate.

Ozone reacts with alkenes to produce a carbonyl and a biradical carbonyl oxide, known as a Criegee intermediate

Until recently, no one had detected Criegee biradicals in the gas phase for two reasons. First, they react extremely quickly. Secondly, alkene ozonolysis reactions - which were thought to be the only way to make them - are too slow in laboratory systems to generate enough Criegee biradicals to detect.

Two things coincided to make Criegee biradical detection possible. Firstly, a fast set of reactions were shown to produce the first Criegee biradical, •CH2OO•. Secondly, tuneable, high intensity beams of light generated at a synchrotron facility (the Advanced Light Source at the University of California in Berkeley, US), allowed •CH2OO• to be detected by photoionisation mass spectrometry (PIMS). 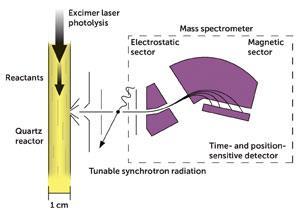 Criegee biradicals can be detected by photoionisation mass spectrometry (PIMS)

All the required gases flow down a quartz reactor. A laser pulse is then fired into the quartz tube to initiate the reactions that form the Criegee biradical. On one side of the quartz reactor is a pinhole through which some of the gas mixture can flow. This gas mixture is then exposed to high energy light from the synchrotron. This will ionise •CH2OO• (and all other species that can be ionised at these energies) into a positive ion. Using electrostatic plates and a magnetic sector, all the ions can be directed to a time- and position-sensitive detector to generate a mass spectrum. We can follow the peak corresponding to the Criegee biradical at 46.005 mass units, and watch it decay over time.

By adding co-reactants, such as NO2, to the initial gas mixture, we see that the rate of decay increases. From this we can work out how fast •CH2OO• is reacting with the co-reactant. This method also works for generating •CH(CH3)OO• by photolysis of CH3CHI2•. Both these Criegee biradicals (•CH2OO• and •CH(CH3)OO•) seem to react particularly quickly with SO2, NO2 and CF3COCF3•. They probably form initial adducts, which then decompose to form products.1,2,3. Previous indirect studies suggested that the reactions of Criegee intermediates were much slower – this shows the value of direct measurements.

Criegee biradicals react very quickly with SO2 and NO2 to form SO3 and probably NO3 (although this is still being verified):

SO3 and NO3 are very reactive in the atmosphere and can go on to form sulfuric acid, nitric acid and organic nitrates. All of these compounds will add to the aerosol level in the atmosphere, either by adding to existing aerosol particles or, in the case of sulfuric acid, acting as a site for new aerosol particle formation. Sulfuric acid is extremely hygroscopic – water sticks to it very easily. This process can seed new aerosol formation as the initial cluster of sulfuric acid and water molecules grows into bigger particles.

In urban areas we would want to avoid high levels of aerosols as they are associated with poor health and poor air quality. However, aerosol particles (non-soot ones, at least) tend to cool the planet down and contribute to a phenomenon known as global dimming or global cooling. The aerosol particles can act like little mirrors and reflect visible light from the Sun back to space. This reflection cools the planet. About 24% of the energy from the sun is reflected by clouds and aerosols, with a further 6% reflecting off icy surfaces like Antarctica, leading to a cooling effect of about 25°C.4,5 This means there is a lot of interest in Criegee biradicals because they may be important in climate cooling. 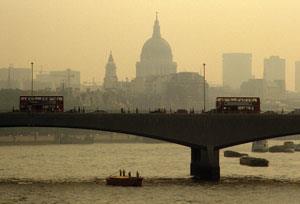 Criegee biradicals can be created in photochemical smog