Robotic chemistry sets for the classroom 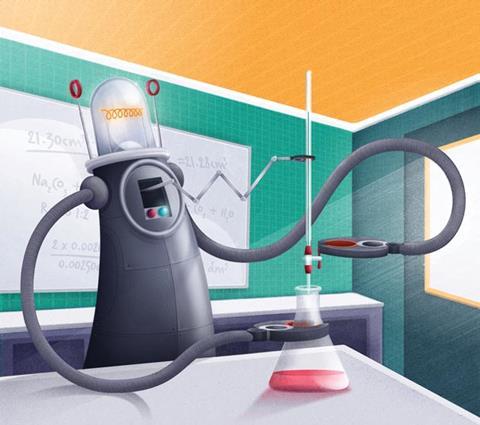 Could robotic chemistry sets lead to a revolution in creative, digital-driven chemistry teaching and practical exploration?

The mass production of the BBC microcomputer, designed primarily for education and used extensively in schools and homes in the UK in the 1980s, is a significant milestone in the UK’s computing history. While it is hard to quantify the impact of the BBC’s computer literacy project, it is fair to say it inspired a generation of programmers and can be credited with laying the foundation for the UK’s current leading role in the IT, computer game design and digital media industries. This area has undergone something of a renaissance in recent years, with affordable microcomputers such as the Raspberry Pi and Arduino enabling more people to learn to programme. The BBC itself has recently gone full circle in releasing the BBC micro:bit, a pocket-sized codeable computer which, in 2015, was provided free to every child in year 7 across the UK.

A digital chemistry education project could emulate the BBC’s success by developing cheap, customisable platforms allowing students to simultaneously learn in the areas of chemistry, electronics and computer science. In our lab, we are planning a roadmap to develop chemical robots and help teachers gain access to new resources for teaching practical chemistry, especially in schools with limited facilities or specialist teaching resources – a well-known issue in pre-university chemistry education.

In the 1990s the pharmaceutical industry invested tens of millions of dollars in robotic infrastructure for high throughput synthesis and the screening of new compounds. This led to the rapid development and application of robotic hardware, control software, data processing techniques, liquid handling apparatus and analytical detectors by pharmaceutical companies. Automation is also commonly used in the synthesis of peptides and oligonucleotides, with many off the shelf units available to both industry and academia. Simple automated liquid handling robots have also been used in undergraduate teaching labs.1 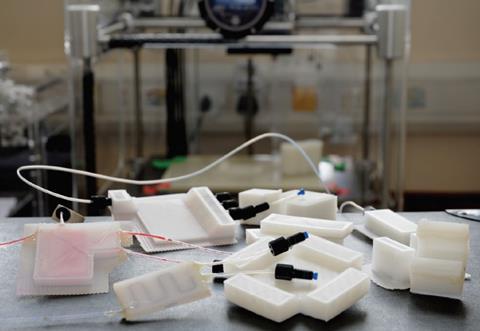 Recently we have shown that chemistry can be coupled with 3D printing for chemical synthesis and purification or autonomous formulation optimisation using liquid handling robots and artificial intelligence. We have used computer-aided design and 3D printing to produce low cost sealed ‘reactionware’ customised for specific reactions.2,3 Not only can this function as a container, but features such as catalysts and in-built purification may be integrated during the fabrication process, as can the reagents, producing a self-contained chemical reactor. The rapid fabrication and low cost nature of 3D printing technologies makes it a good candidate for chemical education – enabling low cost, reparable and customisable equipment for students, as recently reported for the design and optimisation of a simple colorimeter.4

We have also developed in-house robots for the optimisation of dynamic oil droplets. Our chemorobotic system is based on an open source 3D printer, modified for liquid handling and droplet placing experiments.5 The robot can autonomously decide experiments to perform and record the resulting droplet behaviours. By trial and error, using a genetic algorithm, the robot can optimise oil recipes for targeted behaviours. While this platform is not currently affordable or reliable enough to be rolled out in a classroom situation, it is an illustration of how relatively cheap platforms can be built and customised for chemical research – when reported, this platform had been used for over 10,000 experiments.

One of the key problems in primary and secondary chemistry education is the availability of facilities suitable for practical chemistry. For example in 2013 around 60% of schools reported they did not have enough pH meters or three figure balances. Similarly for laboratory amenities such as fume hoods and bench space, nearly a fifth surveyed had access to less than 70% of the basic facilities assessed. 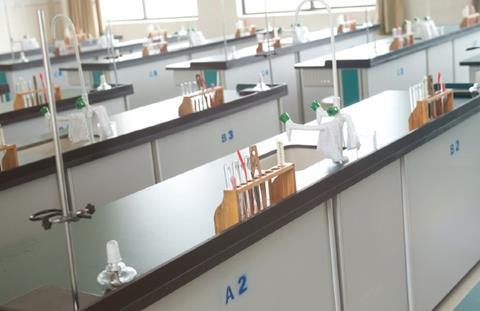 As well as the need for appropriate resources, facilities and equipment, teachers must be suitably qualified and comfortable with supervising students and running experiments. In the most recent Department for Education report into the school workforce in England, 13.6% of science lessons taught to pupils in years 7–13 were taught by teachers without the relevant specialist qualification.

Robotic chemistry sets could overcome many of these problems. Robots with built in extracts and liquid handling can help overcome issues around safety, potentially removing the need for fume hoods and direct contact with chemicals. Analytical equipment could be built into the platform, including webcams, acoustic sensors, strain gauges, spectrometers and pH meters. Integrating a webcam could allow the wider demonstration of experiments via video conferencing. Robotic units could be made portable – allowing them to visit various schools, widening their impact, while they could also be modified or updated to reflect changing syllabus content.

Because the robotic systems can be pre-programmed, they can be rigorously tested before use, as well as having various limits and safety measures built in. Testing could be undertaken in a number of stages including by the developers, by small groups of students with the supervision of the developers and finally in schools led by teachers. Outreach schemes such as the STEM ambassador network could also be used during the later stages of testing. It will also be important to interact with teaching professionals during the design process on issues such as safety, facilities, training and intended learning outcomes and their relevance to the curriculum.

From robotic titrations to explosive chemistry

There is a huge range of possible chemistry experiments, demonstrations and techniques that could be integrated into a robot for use in secondary schools. One needs only to look at the regular Exhibition Chemistry section of Education in Chemistry for a range of potentially suitable, interesting and educational experiments, or at MEL Chemistry, a company that posts two new chemistry sets per month to the homes of its subscribers.

The key to the success of robotic chemistry sets will be finding experiments and platforms that are relevant to the syllabus and able to engage students, while also taking advantage of the robot’s extended capabilities as enablers for learning. Researchers and teachers will need to work together at an early stage to identify experiments that are possible given hardware and safety restraints.

We have already come up with some suitable starting points for such a platform. One fairly simple example is a titration robot that can link in with learning about acid–base chemistry, titrations, equilibria and indicators. This is an experiment very suited to automation, requiring only the precise addition of one solution to another and cleaning. Image recognition of the colour change or a pH meter could also be integrated if desired. Simple experiments could include students controlling the amount of titrant added to find the end-point or students having to do several titrations to determine the most suitable buffer solution for a given titration.

Another topic that may be suitable for automated experiments is endo- and exothermic reactions. These reactions are often used in chemistry demonstrations due to their ability to engage an audience, while they can very much reinforce the concepts of energy being taken in or given out in a chemical reaction. These are also some of the demonstrations that teachers may be reluctant to undertake in the classroom due to safety concerns.

A suitable endothermic reaction could be the mixing of barium hydroxide and ammonium thiocyanate, which can generate enough of a temperature drop to freeze water touching the outside of a dish. This would require the handling of solid powders, mixing and cleaning – again all technically possible, while a digital thermometer could also be used to illustrate the temperature drop. We can imagine a competition for students trying to get the largest temperature drop by changing variables such as the ratio of salts, the choice of salts (for example also ammonium chloride or ammonium nitrate), the stirring rate or different containers.

For exothermic reactions, safety must be carefully considered, but it should be possible to design a platform that can be safely used by teachers to demonstrate some explosive chemistry. The use of an automated system has several advantages for this including that the teacher doesn’t have to be close when the reaction is occurring and the potential for a blast shield to be integrated into the robot. Candidates include preparation and setting off of nitrogen triiodide, the thermite reaction or the reaction of potassium permanganate with glycerol or hydrogen peroxide. These reactions can be linked to thermodynamics, kinetics, redox chemistry and balancing equations. A key issue will be ensuring that systems are not only safe but resistant to corrosive materials and extremes of heat. However the use of 3D printers to construct the systems will mean that parts can be easily repaired.

Of course these robotic chemistry sets don’t need to be sealed, closed and uncustomisable systems. There are a range of ways in which extra learning may be achieved by allowing students to hack the platforms, for example through hardware modification using 3D printers or by expanding the possible set of experiments by students or teachers modifying the electronics or software. This allows students and teachers to express some creativity, although safety will be paramount for this type of work.

Safety is the responsibility of both the developers and teachers. If an experiment were undertaken involving customisation of the platform, it would either need to be within a strict, tested range of possible experiments or under the close supervision of a suitably qualified individual. The 3D printer chemical robot should not be used as a proxy for a person conducting unsafe experiments, but for the system to provide an extra layer of safety, control and observations for experiments. It does, however, enable enquiry-based learning, allowing students to develop skills including the proposal, disproval and updating of hypotheses, linking evidence to conclusions and creativity. 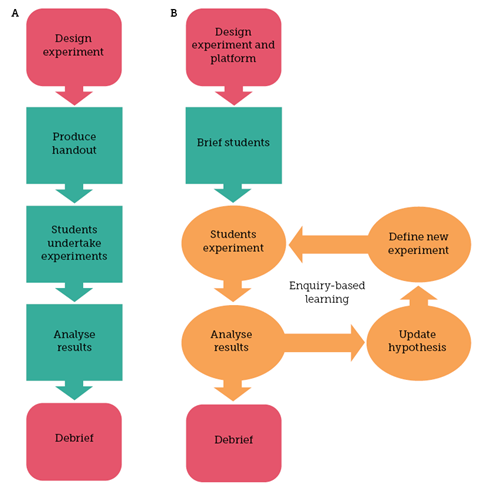 New robotic chemistry sets have real potential to positively impact secondary level students’ learning of both practical and theoretical chemistry, by both increasing students’ enthusiasm and by allowing a greater range of experiments to be undertaken in school labs. It is only recently that suitable hardware has become cheap enough for this to be possible, while an increasing focus on automation and programming in education and industry makes this especially relevant. Safety is of the utmost importance in this work and consideration must be given to putting safety limits on the platform, developing suitable experiments and teacher training. For this reason, an initial roll-out phase involving the platform developers is suggested, similar to other science outreach schemes.

Another key point is that the pedagogical objectives must come first, with each experiment clearly designed to complement a part of the chemistry syllabus. Evidence must be collected to quantify how robotic setups impact students’ performance and personal achievement. This could be taken further for more able and enthusiastic students by allowing (limited) hacking of the platform, for example in after school STEM clubs. Indeed, we could imagine an inter-school competition based on joint chemical/robot optimisation, given safety limits and suitable supervision, similar to the FIRST LEGO League.

It would be wonderful to realise a growing community of teachers, students and parents combining robotics, 3D printing, electronics, programming and chemistry. What will the explosion of creativity lead to?

Leroy Cronin is regius professor of chemistry at the University of Glasgow. Laurie Points is a PhD student and Jonathan Grizou is a postdoc in Lee’s research group