Measuring carbon dioxide from plant debris provides an opportunity for an inquiry-based experiment aimed at 14-15 year olds. Similar experiments are done by soil scientists and ecologists in their efforts to understand the global carbon cycle 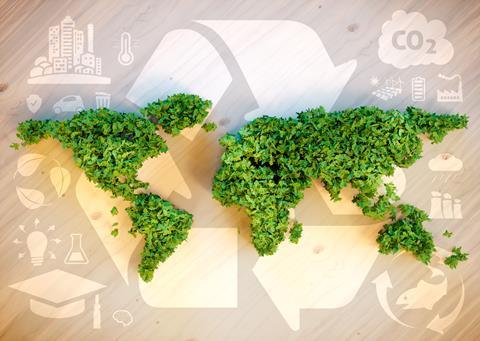 The purpose of this investigation is not for students to arrive at a single, 'correct' answer but to develop inquiry skills. Box 1 illustrates the problem. Students are seldom aware that bacteria and fungi feed on the dead remains of plants and, via respiration, release CO2 to the atmosphere. Leaf litter decomposition is a key process in the global carbon cycle. Each year, the mass of CO2 released by decomposing leaves is approximately equal to that released by animal and plant respiration.

In a trial of the experiment, working with teachers, we divided a class into groups of three-four students based on their abilities. After about 30 minutes, we collected their plans for evaluation. The next day, we invited the students to present their plans to the rest of the class. This is done to turn assessment activities into a teaching-learning activity. Twenty minutes were allocated for each presentation. Each group needed to answer questions raised by other students. After the presentations, students did experiments according to their plans. The problem has been designed to be an open-ended investigation so students should be allowed to try out their own plans.

We found that our students had the following common procedural errors or limitations in their experimental designs:

Here we present a sample procedure for teacher information. It should not be distributed to students as a cook-book style experiment.

Materials (per group of three-four students):

(Put on your safety goggles and wear lab coat and gloves.) Obtain two airtight containers. Label one container as 'experimental' and the other as 'control'. Obtain eight to 10 leaves (use the same type of leaf and if the leaves are large in size, reduce the number of leaf). Record the total mass of leaves. Put the leaves into the experimental container.

Fill the top plates of the two glass Petri dishes half-full with distilled water. Place one plate of water into the experimental container and the other plate into the control. Using a marker, label the bottom plates of the two Petri dishes as 'experimental' and 'control'. Weigh each plate separately and record its exact mass. Using a spatula, spread out a thin layer of the oven-dried soda lime granules in the plates. (CAUTION: Soda lime is corrosive. Do not touch it with your bare hands.) Weigh each plate separately and record the exact mass of soda lime used. Place the plates containing soda lime into the experimental and control containers. Using a measuring cylinder, carefully add 5.0cm3 distilled water to the soda lime in the experimental and control containers to activate the soda lime. Immediately seal the containers and place them in the location specified by your teacher for one week.

Risk assessments should be done in advance by the teacher. Teachers should also note that:

Although soda lime is a variable mixture of sodium hydroxide and calcium hydroxide, you do not need to know the exact percentages of these chemicals to calculate the mass of CO2  absorbed. You may guide your students to apply the following chemical concepts to solve this problem.

Absorption of CO2 occurs by:

For every mole of CO2 that is reacted with Ca(OH)2 in the soda lime, one mole of H2 O is formed that is subsequently evaporated during oven-drying. Thus, the increase in mass of dried soda lime measured before and after the experiment is not equal to the mass of CO2 absorbed.

Similarly, from equation (ii), if one mole (44g) of CO2 has been absorbed by two moles of NaOH in the soda lime, the increase in mass

- the mass of two moles of NaOH

Similarly, from equation (ii), if one mole (44g) of CO2 has been absorbed by two moles of NaOH in the soda lime, the increase in mass

Like Ca(OH)2, the mass of CO2 absorbed by NaOH = increase in mass × 1.69. Thus, the relative amounts of Ca(OH)2 and NaOH in a sample of soda lime is not important in this experiment. Some chemical suppliers also add potassium hydroxide to soda lime, but the mass of CO2 absorbed by potassium hydroxide can also be obtained by multiplying the increase in mass by 1.69.

The mass of CO2 released depends upon factors such as the type of plant, the amount of bacteria and fungi, and the temperature. With Bauhinia purpurea leaves, for example, I found that 0.012g of CO2 was released per gram of leaf per day. In countries with cooler climates than Hong Kong, a treatment period longer than seven days may be needed. Students could do the following additional activities as extensions:

Overall we have found that such practical activities set in a real-life context are of prime importance to chemistry students because they help to structure the learning process, and give purpose to learning chemistry.

Dr Derek Cheung is associate professor in the department of curriculum and instruction at The Chinese University of Hong Kong, Shatin, Hong Kong (e-mail: spcheung@cuhk.edu.hk).

I would like to thank the Quality Education Fund for financial support of this project (grant code 2003/0750).

Plant debris decomposes in the soil, releasing carbon dioxide. This is because bacteria and fungi break down dead leaves by the following chemical reaction:

This reaction is one of the components of the global carbon cycle. Different types of plant material decompose at different rates. Green, leafy matter decomposes easily, but woody, stem debris takes longer. Low temperatures, dry conditions and flooding will also slow down decomposition. Unfortunately, human activities - especially burning of fossil fuels - have led to changes in the natural carbon cycle. The cycle is now out of balance. The amount of carbon dioxide in the atmosphere has increased from 280ppm to 370ppm over the past 140 years, resulting in global warming via the greenhouse effect. The slight warming of the Earth's surface may cause bacteria and fungi to decompose dead leaves more rapidly, releasing even more carbon dioxide into the atmosphere. This investigation will provide you with an opportunity to understand part of the carbon cycle dynamics.

Suppose that you work as a chemist in an environmental protection company. Your challenge is to plan and do an investigation to determine the number of grams of carbon dioxide released by one gram of dead leaves per day. Submit the plan as group work by __(enter date)__. Your group will be presenting on __(enter date)___ in front of the company representatives. You will have 10 minutes to present your plan, followed by 10 minutes in which you will be expected to respond to queries.

Your presentation needs to answer the following questions:

After reviewing your experimental design, the teacher will discuss any safety precautions that are specific to your design. Obtain teacher approval before beginning any lab work.

Submit a lab report in writing by __(enter date)__. Make sure you include the following information in your report: