Hundreds of different chemicals can ruin our water, so measuring their levels is vital. Josh Howgego investigates whether building sensors that can do the job cheaply and remotely will ever be possible 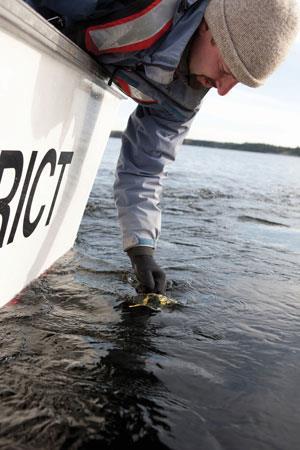 This year, there is a question hanging over Europe’s rivers, lakes and seas. The EU Water Framework Directive, a water management plan adopted in 2000, requires that all surface water be of ‘good status’ by the end of 2015. But how will the member states know whether they have met that objective? Checking the health of Europe’s many water bodies entails understanding the levels of at least 500 chemicals. And analytical chemist Dermot Diamond says the EU has a problem there.

The only way to measure the levels of those 500 or so chemicals accurately is with a tandem liquid chromatography–mass spectrometry instrument (LCMS). But the use of such instruments is unlikely to be feasible on a Europe-wide scale. It would take multiple batteries of LCMS machines, plus staff and laboratories that meticulously keep track of their samples (to avoid accusations of fraud). That’s not feasible, says Dermot, if only because each LCMS machine costs around £500,000.

The answer, he says, is likely to be remote sensors installed in water bodies that sit there quietly measuring chemical levels and broadcasting the data back to Europe’s laboratories. The trouble is, sensors that fit this brief do not yet exist.

So chemists are beginning to ask what it would take to build a sensor that could be thrown into a lake or river, where it would sit for years, without harming the environment, remotely reporting chemical concentrations to a central hub. Meanwhile, big research funders are also beginning to recognise the pressing need for these sensors. For example, the X Prize Foundation, a not-for-profit outfit that offers large prizes to incentivise ambitious research projects, is currently offering $2 million in prizes for teams designing sensors that accurately and affordably measure ocean acidity. Another group is offering awards for affordable nitrate and phosphate sensors, though the prize for this has yet to be agreed.

Beginnings in the blood

If anyone is likely to invent these challenging gizmos, it is Dermot. He has a history of developing sensors that can operate in hostile environments – including the soup of chemicals running in our veins.

At the start of the 1990s, he was part of a team that created a sensor for sodium in the blood. Blood has some similarities with lake water, in that there are a whole bunch of chemicals swirling around and this makes it difficult to pick out sodium accurately, while avoiding the similarly-sized potassium, for example.

Dermot’s research team did it using calixarenes, cup-shaped molecules that sodium ions neatly fit into. They developed a sensor in which the calixarenes were bound onto a polymer membrane, so that when sodium is present in the sample, it is selectively absorbed into the polymer, creating a signal that can be converted into a sodium concentration (see Calixarenes in the blood).

These days the blood sodium sensor Dermot helped to invent is used to profile electrolyte levels in clinical settings. The doctor takes a blood sample and generates the electrolyte profile using analysers typically based in centralised biochemical labs. The sensor cartridges used in these instruments have to be replaced regularly due to their limited lifespan when exposed to blood. In many cases, biochemical sensors are used only once, then discarded.

Early on in his thinking about water sensors, Dermot wondered if the functional part of this sensor could be used in lakes or rivers. He tried it out, but found that after just a few days a sort of biochemical slime, essentially bacteria and algae, would begin to accumulate on the sensor’s surface. This ‘biofouling’ effect quickly threw off the sensitive electrochemical measurements. He needed a sensor that could be ‘deployed and forgotten’, as he puts it, because the cost of sending a technician to clean a sensor every week or so would quickly mount up with a device in every river in a country. He needed to re-think the design. 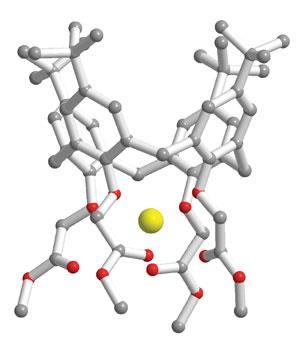 Dermot’s blood sodium sensor is based on calixarenes, cup-shaped molecules with a cavity in the centre into which small ions can fit. The exact size of the cup (the number of phenyl rings in the circular chain) and the nature of the groups attached to both rims of the cup can be tailored to suit different sized ions. The calixarene shown here is highly selective for sodium ions (in yellow), but changing the number of phenyl rings from four to six, would result in a calixarene that would bind a larger ion, such as caesium.

The calixarenes are amphiphilic: they have a relatively polar ester group towards their thin end and a non-polar aromatic region at the other. This means they fit nicely into polymer membranes. So the device is essentially a membrane impregnated with calixarenes. When the ion binds it creates a change in the membrane’s charge, and this is carried out along a conducting wire. Any changes in the voltage across this wire means sodium is binding to the calixarene.

At the sewage works

Skip to 2009, and Dermot is at the Oberstown Wastewater Treatment Plant, a sewage works near Dublin, Ireland.

Dermot knew a sensor with a surface that could be rendered insensitive by biofouling would not work. So he had been working on a new type of sensor that used old fashioned chemical reactions to produce colour changes. Since bacteria shouldn’t disrupt this kind of test, the sensor would surely work in even highly polluted water, Dermot reasoned. Where better to prove its resilience than a sewage works? 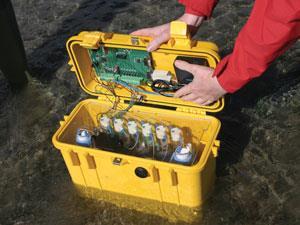 Here’s how the sensor works. The method is based on a well-known chemical reaction that produces a colour change. Two reagents, ammonium molybdate and ammonium vanadate in sulfuric acid, are mixed with the water sample. Any phosphate in the water sample will react with the two reagents to produce a compound called vanado-molybdophosphoric acid. This compound is yellow and absorbs light specifically with a wavelength of 370 nm, so it’s possible to measure its concentration photometrically: you shine light with a wavelength of 370 nm through the solution and record how much is absorbed. The absorption reading obtained is directly proportional to the amount of phosphate in the water sample. The method was implemented using microfluidics for the sample and reagent handling, and a low cost LED-photodiode to detect the colour.

The sensor trial ran for seven weeks and it gave accurate readings during that whole period, except for on a few days when air bubbles were drawn into the microfluidics, resulting in anomalous spikes. One issue was the ‘limit of detection’, the lowest concentration of phosphate that the sensor could detect. This was rather high in the Oberstown trial prototype, but Dermot says he’s currently collaborating with a group at the University of Southampton to test a new design that will offer improved sensitivity.

Ultimately though, if Dermot is to create a sensor design that can be deployed in its millions across Europe, merely revising the Oberstown design won’t be enough.

To make sensing easy and cheap, sensors should work autonomously for long periods, ideally several years. With this sensor, that isn’t possible for three reasons. Firstly, the reagents are only stable for about a year, after which time they begin to chemically degrade and the reaction stoichiometry skews. Secondly, the sensor needs regular calibration. That means making sure the measured light absorbance really does correspond to a correct phosphate concentration by injecting standard solutions with known amounts of phosphate in them and using these to compensate for any discrepancies. Thirdly, the sensor is in sewage, a harsh environment. Lots of bugs live in raw sewage and it is not long before these begin to multiply and create a bio-gunge that blocks the sensor’s microfluidics. Dermot says all these factors mean a sensor can run for no more than about three months before it needs attention from a scientist. ‘Three months service is good,’ says Dermot, ‘but it needs to be extended further to drive down the cost’. 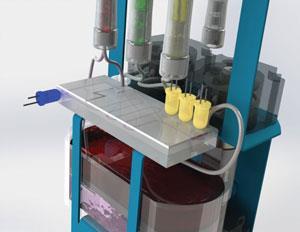 And speaking of cost, while the chemical reagents involved in the reaction are cheap, and only small quantities are needed anyway, the sensor is still rather expensive. About 70% of the cost comes from the pumps needed to inject precise amounts of the reagents and water samples into the microfluidics, says Dermot. The valves alone cost £50–100 each.

‘With classical biosensor surfaces, it’s usually days before you have to take some sort of action. With the reagent-based systems we’re working on, we can push it up to several months. And the cost base is still too high. We have the cost of the components down to about €200 (£147), not including the manual labour. But commercial phosphate sensors are about €20,000 – so with good engineering we’ve actually managed to be quite disruptive. We reckon we can sell these instruments at between €2000 and €5000, make a good profit and vastly undercut what’s out there at the minute.’

The trouble is, says Dermot, the improvements he has made so far have mainly been achieved through clever engineering and sourcing components cheaply. But that is not revolutionary enough to reduce the cost by the amount needed.

Bigger changes will be needed if a field-deployable analyser costing €20 will ever be possible. Dermot has one such idea: replacing the mechanical valves that most sensors use to control the flow of reagents and samples with innovative polymers.

Solenoid valves are essentially screws that can be rotated up or down to open or block channels. Doing away with them is a good idea because, for one thing, they are the most expensive part of Dermot’s sensors. And for another, as Dermot puts it ‘if you get one piece of grit in there – that’s it’ the sensor stops working.

In 2010, Dermot’s research team showed that a type of soft polymer called an ionogel could act as a chemical valve: instead of a mechanical screw being lowered and retracted, the polymer itself would expand or contract to control microfluidics channels.

Making Dermot’s coveted €20 analyser is clearly some way off. But scientists can be encouraged in their efforts by the kind of neat things sensors like this could make possible if they were to become a reality. 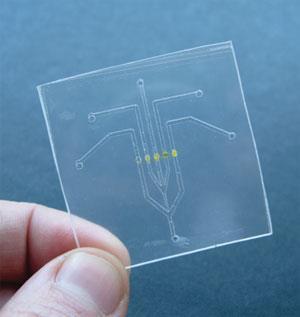 The microfluidic chip with ionogel valves in position (yellow)

They might give us real-time information about our personal health or rapid warning of a pollution event, for example.

That may sound far-fetched, but chemists have already shown it is possible to estimate an area’s cocaine use by sampling its waste water. Dermot points to the work of one of his colleagues, Brett Paull, who in 2007 sampled water at five different waste water treatment plants in the Greater Dublin region. Brett’s team sampled water at each site and analysed the amounts of cocaine and cocaine breakdown products using a tandem liquid chromatography–mass spectrometry instrument. They found that central Dubliners appeared to be using far more cocaine – about 200 times more – than their suburban counterparts.

While the results are interesting, they are not high enough resolution to lead police to the capital’s drug dens. But if chemical sensors (low cost mass spectrometers would be needed, Dermot says) were installed at intervals along Dublin’s sewers, that could become feasible: by tracking how the concentrations of drugs in waste water decrease, authorities could map their way back to a source, perhaps pinpointing the likely neighbourhoods where drug shops were located.

In fact, the possibilities could extend further. Dermot dreams of a ‘revolution’ based on what he calls ‘internet-scale sensing’. This is where millions of tiny cheap sensors detect everything from air temperature to pollution levels to acidity and make the information available online. Scientists have estimated that this network of sensors is at an equivalent stage of development to the internet in the 1970s. So, in the next decades, it’s anyone’s guess where the technology might take us.