Vitamin D is often called the sunshine vitamin, but what is vitamin D, why is it so important, and what evidence is there to link it to such a range of illnesses? 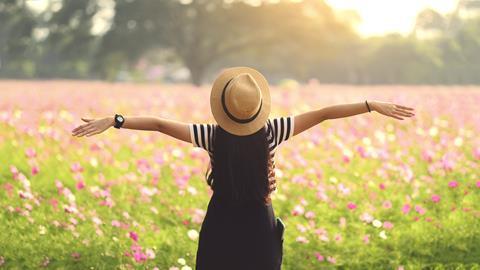 Vitamin D is often called the sunshine vitamin because it is made as a direct result of ultraviolet rays from the sun falling on our skin. Essential for a healthy skeleton, there is now some evidence that a deficiency in this vitamin could lead to illnesses as diverse as cancer, diabetes and flu. So what is vitamin D, why is it so important, and what evidence is there to link it to such a range of illnesses? 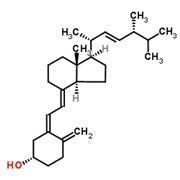 Vitamin D is a group of fat soluble compounds which have structures based on steroids, ie contain four connected carbon rings. Two types, D2 (1) and D3 (2), are found naturally in the diet, while D3 can also be synthesised in the body if the skin is exposed to ultraviolet light with a wavelength of between 290 and 315 nanometres (ie UV-B). On absorption of UV-B, the compound 7-dehydrocholesterol, which is common in skin cells, rearranges to form the energetically more stable D3. 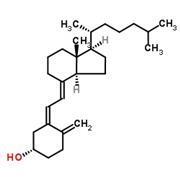 Once formed, vitamin D3 is converted by enzymes in the liver and kidney to the more active 25-hydroxyvitamin D (25(OH)D). This compound – a hormone – works together with specific proteins to allow effective transport of calcium and phosphate ions through the blood. A lack of this compound reduces the uptake of these ions from the intestine and creates a shortage for bone growth. (Bone is made up of a network of collagen fibres impregnated with crystals of hydroxyapatite, Ca5(PO4)3(OH).)

A shortage of vitamin D leads to rickets in children and osteomalacia in adults, both characterised by soft, deformed bones which cannot support the weight of the body. At the beginning of the 20th century, over 80 per cent of children in the industrial cities of northern Europe and north-east US had rickets – partly because of poor diet but also because they weren’t getting enough sunlight to compensate.

Nowadays rickets is much less common because vitamin D is added to various foods, and more people are aware of the benefits of a balanced diet. Oily fish is the most important dietary source of vitamin D, containing 5–10 micrograms (μg) per 100 g. Other sources such as margarine, some breakfast cereals, red meat and egg yolks, have lower levels, from 1–8 μg per 100 g. The recommended daily allowance of this vitamin for 14 –18 year olds is 5 μg per day in the US, while in the UK 10 μg per day is recommended for certain ‘at risk’ groups such as pregnant and breast-feeding women.

Around 90 per cent of our vitamin D requirement is made in our skin, with just 10 per cent coming from the diet. And herein lies a potential problem. The amount of vitamin D that can be synthesised in the body will be subject to seasonal variations in sunlight. Not a problem if you live in the tropics, but in winter, at latitudes above 52º north, ie northern Europe and north-east US, the light does not contain enough UV-B to rearrange the vitamin D precursors in the skin.

Elina Hyppönen, a research scientist in epidemiology at the Institute of Child Health at University College London (UCL) is interested in the role that a vitamin D deficiency may have in various illnesses. She explained to InfoChem, ‘Owing to a lack of UV-B in northern latitudes many people in these regions will have low levels of vitamin D in the winter. To prevent severe vitamin D deficiency we need to have concentrations of 25(OH)D above 25 nanomoles per litre (nmol l-1) in the body’.

According to Hyppönen 15 per cent per cent of the Caucasian population in the UK, for example, has below 25 nmol l-1 of 25(OH)D in the winter and around 90 per cent has less than 75 nmol l-1 which is still considered to be less than optimal. People with darker skin pigmentation have potentially lower levels because the natural pigment melanin acts as a sunscreen and reduces UV-B induced vitamin D production in the skin. While not low enough to produce rickets or osteomalacia, she and her team are currently investigating the possibility that such levels might be linked to other health problems.

Hyppönen told InfoChem, ‘In our group we have looked at associations between infant vitamin D supplementation and the risk of developing diabetes during the next 30 years of life’. The team recorded the occurrence of diabetes in 12 000 people born in Finland in 1966. ‘What we saw was that children who took vitamin D supplements regularly had an 80 per cent reduction in their risk of developing diabetes’, explained Hyppönen. The researchers also found a link between vitamin D deficiency and increased incidence of diabetes. ‘It doesn’t prove it is causal, but it was a consistent association,’ said Hyppönen.

Other researchers are looking at the link between vitamin D in the body and the development of cancer, tuberculosis, cardiovascular disease and even flu. It may be more than a coincidence that flu increases in autumn and winter – when levels of 25(OH)D in the body are lowest. However, Hyppönen cautions, ‘while it is a very interesting hypothesis, more research is needed to prove that vitamin D deficiency is indeed the cause for these variations.’

She pointed out that it is too easy to jump to wrong conclusions about what causes disease, since several health problems are often interlinked. Obesity, she explained, is a common factor in the development of many diseases, including diabetes and cardiovascular disease. In addition, obese people are more likely to be vitamin D deficient, since vitamin D is fat soluble and tends to accumulate in body fat rather than being circulated round the body. ‘If you think about the associations between vitamin D concentrations and obesity and all the conditions linked with obesity, you could draw the wrong conclusions. We need to be careful otherwise we will make wrong assumptions simply through association’.

A good way to prove the role of vitamin D in disease is through controlled clinical trials, where volunteers are randomly given one of a choice of ’treatments‘, which in this case would either be a vitamin D tablet or a look-a-like tablet that didn’t contain the vitamin (a placebo). So long as enough people are tested, explained Hyppönen, this is a reliable method for determining the effectiveness of the treatment.

One feature of vitamin D biochemistry, said Hyppönen, is that those receptors (proteins) which bind specifically to 25(OH)D exist in many parts of the body, which suggests widespread influence. Also vitamin D is unusual in that it can affect the chemical pathways leading to infectious diseases, such as flu, and diseases like diabetes which are caused by an overactive immune system. 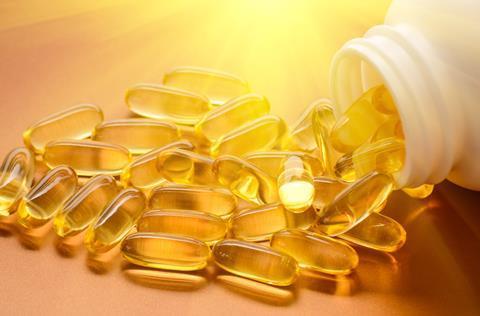 What is clear is that vitamin D deficiency is common in northern Europe and northern parts of the US, and unlike other vitamins and nutrients, which can be obtained mainly from the diet, this is not the case with vitamin D. Research points to around five–10 minutes of sunlight, between 10 am and 3 pm daily from spring to autumn as adequate to prevent vitamin D deficiency for people with light skin. However, while the Food Standards Agency finds that ‘most people should be able to get all the vitamin D they need from their diet and by getting a little sun’, Hyppönen is more cautious. ‘Since it is difficult to obtain sufficient vitamin D from the diet, I would recommend vitamin D supplements during the winter and at times when you receive little natural light.’