Secrets of the trade: Jonathan Hare looks at the science of getting your clothes clean

When you buy washing powder there are generally two varieties to choose from: ‘biological’ and ‘non biological’. Why do we need two types and what exactly is the difference?

Grease and other types of dirt are generally organic matter, which is not very water soluble. These are hard to remove from clothes simply by washing in clean water. That’s why we need soap.

Soap and other cleaners can be made by reacting fats with alkalis – soap is a salt of a fatty acid. A typical soap is sodium stearate; a molecule with a long organic ‘tail’ and an ionic ‘head’.

When soap and water is added to the washing, the ‘tail’ of the soap molecule is drawn to the organic grease while the ionic ‘head’ interacts with the water. The result is that the soap acts as a bridge between the insoluble grease and the water. The soap removes the dirt and grease from the clothes by forming spherical aggregates (called ‘micelles’), which can be washed away. Soap-based washing powders such as these are called ‘non-biological’ washing powders.

Learn about the chemistry of Vanish stain remover with Chemistry in your cupboard.

Learn about the chemistry of Vanish stain remover with Chemistry in your cupboard (https://edu.rsc.org/resources/vanish/13.article).

Enzymes can be used commercially, for example in the synthesis of antibiotics, manufacture of cheese and brewing beer. When added to washing powders they greatly enhance the breakdown of proteins and fats in our dirty clothes. These enzyme-based cleaners are called ‘biological’ washing powders. They work well in warm water (rather than a hot wash) so they save us energy.

Early biological washing powders, often caused irritation for people with sensitive skin and so brands of enzyme-free, ‘non biological’, powders are still produced. However, enzyme-based powders have been around for many years now and most of the potential irritants have been identified and removed, so biological products should not create problems for most people. Many countries now only produce biological powders, but in the UK both types are still available.

How do they compare? 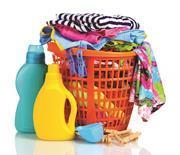 Recently BBC Radio 4’s You and Yours programme broadcast a feature on biological and non-biological washing powders. Their resident scientist, Mark Lorch, suggested a nice experiment to show the effectiveness of the enzyme: pieces of hard-boiled egg (which is mainly protein) were added to solutions of the two different washing powders. Left overnight, the non-bio cleaner didn’t do very much. However, the enzyme-based biological cleaner made the fragments smaller and clearly attacked the egg.

The classic ‘clean’ smell of washed clothes is mainly due to fragrances put into the powder by the manufacturer. Fragrances we think are ‘clean’ vary from culture to culture, so washing powder in India, for example, smells quite different from that sold in the UK.