After three years as head of science I stepped down from the role. To say I learned a lot would be an understatement, and I was lucky enough to have supportive managers and colleagues along the way. With the benefit of hindsight, I’ve compiled a short list of things I learned that fulfil two criteria: first, they are things I wish I’d known sooner and second, they are things I think will help me as I move into other roles. 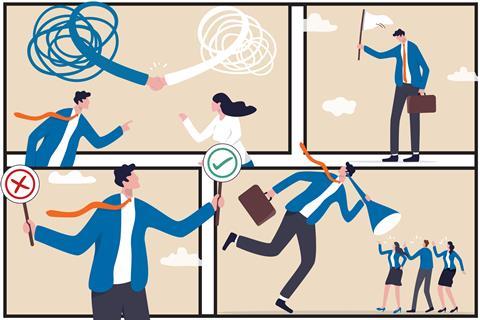 Are you a department leader? Then use these tips and advice to ensure effective communication, collaboration and content colleagues

It’s not that my colleagues weren’t competent enough to do what I wanted, but that I had a vision in my head of what I wanted and didn’t adequately communicate exactly what that was. My colleagues then made an inference based on the information I had provided, and produced a legitimate interpretation of what I said, but not actually what I wanted.

There will be all sorts of rules that govern how your team acts and interacts. Continuing with our spreadsheet example, your team might just know that they shouldn’t make edits to central spreadsheets, other than simple data entry (ie not freezing, hiding, adding rows/columns, tampering with formulas, etc). However, your team will change from year to year as staff leave and join, and there are inevitably some rules that only crop up a couple of times a year and are easily forgotten. Rather than let someone make the mistake first, preempt it by banning unwritten rules. Instead ensure that rules are written down and stored somewhere central and easily accessible.

I made a lot of mistakes as head of department – both big, strategic things and small, operational things. In our school we try to demonstrate accountability in a deliberate sense. For example, instead of waiting and hoping that nobody notices your mistake or blaming somebody else or feigning ignorance, you stand up and say ‘I’m sorry, it’s my mistake. It won’t happen again because I have now put a plan in place …’.

Doing this publicly can be hard, especially in front of colleagues who you are supposed to be leading and guiding. But it is of vital importance for setting the tone, minimising future error and finding out if things have gone wrong early, rather than being surprised by them later.

4. Be honest when having tough conversations

From time to time, leaders need to have difficult conversations with colleagues. Our instinct is to try and soften the blow as much as possible; skirting the issues in a bid not to upset people. My experience is that when you do this, the message doesn’t hit home, and colleagues are either confused or outright misled about the gravity of the situation. Far better to be open, honest and tell people straight up if something has gone wrong and needs to be fixed. Of course, frame it positively where you can, take any necessary blame yourself and offer support going forward, but you still have to deliver the central message. Ask yourself if you were clear about the issue and its importance and if the answer is anything short of a resounding yes, then you need to do better next time.

My next steps involve less in-school leadership and a bit more across-school training and CPD. I’m still going to be working as part of a team and I hope these lessons and strategies find their homes in other contexts. I also hope that others can learn from my mistakes and maybe avoid making them to start with – that would have saved me a lot of time and bother!