Tetranitromethane was originally published in Chemistry World as part of the Chemistry in its elements: compounds series.

As a teenager, I made good use of nitromethane, which has the CH4 structure of methane with one hydrogen atom replaced by nitrogen dioxide: it was an oxidiser in the fuel for model aircraft engines. But I wasn’t aware of the compound’s big brother, tetranitromethane, in which all of methane’s four hydrogen atoms are replaced with NO2. This still makes tetranitromethane a very simple organic compound – yet despite being first made in 1857, its structure has proved so elusive that it was not firmly established until 2017. 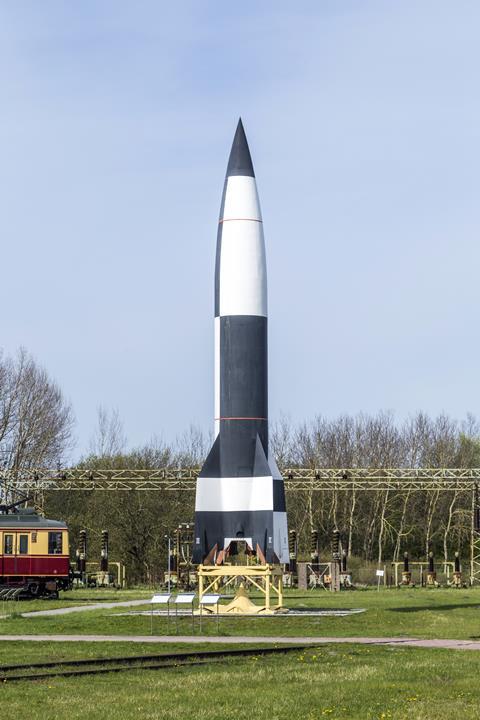 During the second world war, experimental work was under way in Germany to use tetranitromethane to extend the range of V2 rockets

Like nitromethane, tetranitromethane is an oxidiser – but a far more powerful one. This should make it a natural choice for space rockets, which require an oxidiser as well as a fuel because they soon reach altitudes where there isn’t enough oxygen available. Experimental work was under way in Germany during the second world war to use tetranitromethane to extend the range of V2 rockets. Fortunately for the allies, though, tetranitromethane is a tricky substance to deal with. Firstly, it is extremely poisonous, causing organ and nervous system failures. Secondly, it freezes at around 13.9°C, making it an impractical liquid oxidiser outside of a temperature controlled reaction chamber. Thirdly, it is so good at its job that mixing in a small amount of fuel makes it a highly impact-sensitive explosive.

It might seem unlikely that anyone would want to make such a touchy substance, but aside from rocket experiments, second world war Germany also used it to improve diesel fuel. As an additive in small quantities, tetranitromethane reduces the time taken for the fuel to ignite, making it more effective in high speed engines.

That apart, tetranitromethane is also used in a range of laboratory reactions, mostly to transfer nitro groups to other molecules – but its main claim to fame has to be that elusive structure. To quote a 1976 paper on its chemistry, ‘Physicochemical constants determined for tetranitromethane by different workers differ significantly, so that it is difficult to use them to describe the structure of the compound or to assess its purity.’

It would be reasonable to expect such a simple molecule to have a neat and obvious symmetrical structure, but tetranitromethane does not play ball. In their 2017 paper, Yury Vishnevskiy, Denis Tikhonov and colleagues describe it as a ‘nightmare of molecular flexibility in the gaseous and solid states.’ For decades, attempts to pin down its structure have failed, with different approaches producing a range of predictions.

When tetranitromethane was first produced in 1857, ideas on the structures of molecules were still primitive. August Kekulé had only just observed how frequently a carbon atom was connected to four other atoms, and the very existence of atoms as actual physical entities would be debated for several decades to come. But our modern understanding of the interactions of molecules – particularly complex organic molecules – is highly dependent on being able to determine their structures accurately. 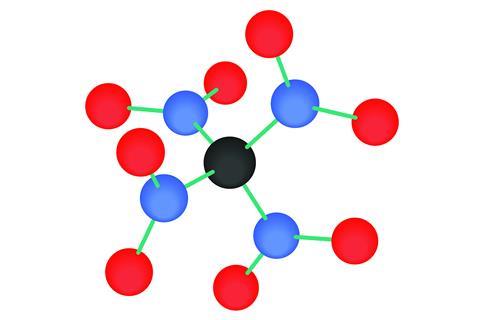 A simple ball and stick model of tetranitromethane. A new analysis uses a sophisticated four-dimensional model to describe the twisting and vibrating of the nitro groups around the central carbon atom

As we have come to understand more about molecules, we have built increasingly complex models – from the balls and sticks used in schools, through the metal plates and bars in Crick and Watson’s 1953 DNA model, to the vivid computer models of protein structures we see today. However, all these models involve a major simplification – we know that, in reality, nothing at the atomic scale is motionless. Chemical bonds are not fixed sticks, but have the potential to twist and shift – and understanding tetranitromethane required taking molecular modelling to the next level.

The new analysis used a sophisticated four-dimensional model to describe the twisting and vibrating of the nitro groups around the central carbon atom when tetranitromethane is a gas, finally fitting to observed behaviour.

Tetranitromethane is a dangerous substance of relatively limited practical use. But it could also transform our approach to the structures and potential interactions of molecules, moving from the limitations of a single fixed shape to realising that tetranitromethane is a morphing transformer of a compound, and taking our understanding of the detail of chemical structure to the next level.