As thick as treacle

In this issue: As thick as treacle 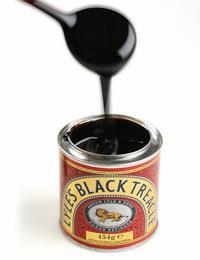 Water is a liquid that flows easily and we say that it has a low viscosity and pours readily. Blood, on the other hand, is thicker than water and so does not flow as easily (although the proverb is about familial relationships not intermolecular bonding).

When a liquid is too thick, ie too viscous, we can thin it with 'thinners', using a different solvent of lower viscosity. Thus you can buy 'paint thinners', which are organic solvents used to thin solvent-based paints.

People with high blood pressure are often given drugs, like warfarin, to 'thin' the blood and thus lower the blood pressure. We also thicken soups and sauces using flour, turning a runny liquid into something as 'thick as gravy', where gluten acts as the active agent in thickening.

A number of common words are used to describe the thickness or thinness of a liquid. A liquid can be syrupy or treacly, meaning that it flows with difficulty and both words describe the behaviour of concentrated sugar solutions - syrup and treacle. One of the joys of eating porridge is to allow a spoonful of syrup to trickle lazily down from the spoon onto the porridge, tracing patterns on the surface. The milk does not behave like this because it has a low viscosity.

The word viscous comes from the Latin word viscum, which means something sticky, a word easily attached to treacle. Viscosity is measured in units called 'poise', named after the French scientist, Jean Louis Marie Poiseuille (1797-1869).

Some substances have the amazing property of changing their viscosity when shaken or stirred. This is known as thixotropy from Greek: thixis  = touch and tropos = change ie it changes on stirring. This is now familiar from the solid paints, which when brushed on flow easily, turning liquid under pressure.

A gel is a state between solid and liquid, which has a high viscosity, and the word derives from gelatine. Gelatinous and glutinous are two words that describe viscous liquids, which become thicker on cooling. Gelatine and gelatinous come from French, but are ultimately derived from the Latin gelare = to freeze. Gelling is not the same as freezing but it has some similarities. The English word jelly also comes from gelatine. Gelid, however, does not mean viscous, as you might think, but cold.

So thick as treacle and thick as blood have similar meanings, but thick as a brick means something very different.

Viscid is another word for viscous and both can mean thick or sticky. Mucilage originally meant a viscous liquid but was used to mean adhesive from 1859. Because of that, mucilaginous came to mean gluey.

Mucous membranes secrete mucus or phlegm, which are sticky, viscous fluids. A phlegmatic person is cool, dull, sluggish - phlegm being the one of the four humours that was associated with the described temperament.