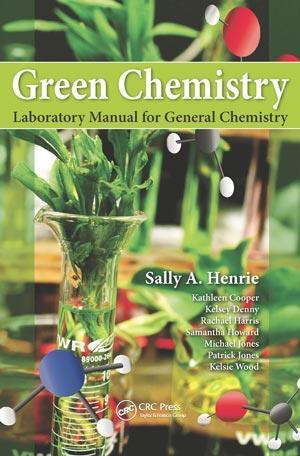 This book is designed as a laboratory manual ready to be used by students. It’s suitable for late secondary or elementary tertiary-level courses. The first 35 pages include a simple introduction to laboratory safety, procedures and equipment, and a basic primer on green chemistry. The subsequent 21 chapters deal predominantly with experiments that best fit general, analytical or physical chemistry practicals rather than inorganic or organic syntheses.

Each experiment chapter follows the same pattern. After an introduction, often accompanied by examples, the objectives are given and are followed by pre-lab questions. The procedures are presented as numbered instruction lists. Data and observation are separate sections that are followed by calculations and guided analysis, with ample space for notes and measurements. The last two sections introduce Think Green – typically with questions connected to the experiments – and the US Presidential Green Chemistry Challenge. This last section, together with the occasional use of non-metric/SI units, indicates the manual’s target US audience, thus diminishing its utility internationally.

For example, the acid determination practical begins by introducing students to molarity, normality, acid–base chemistry and related titrations, using antacids, the gastric system and carbonated beverages as examples. After explanatory calculations the objective is set: compare amounts of acid in ketchup and hot sauce using acid–base titrations. A very detailed procedure explains the equipment setup and titration technique. The pre-lab questions address safety, technique and theory. The last two sections ask students to think about green aspects of using strong and weak acids and bases and the neutralisation of waste streams. Additionally, students are prompted to think about how processes could be improved.

Similarly, in the paper chromatography practical, various chromatographic techniques are described. The objective is to identify food dyes from sweets using the best possible eluent from a given selection. The greenness of eluents is hinted at and differences in US and UK practice for food dyes are highlighted. Pre-lab questions target the background to paper chromatography, safety and environmental credentials. The final sections compare volatile organic with ionic liquid solvents and refer back to food safety when prompting students to evaluate synthetic versus natural dyes. Ionic liquids are portrayed as being advantageous and green, in my view missing out on a more balanced approach to these alternative solvents.

Both experiments highlight a feature also found in other chapters – the links made between chemistry and everyday life. This problem-based approach has to be lauded. Overall, this book provides an introduction to green chemistry and engages students in the process of challenging traditional methods by benchmarking them against the 12 principles of green chemistry. Although truly critical evaluation of the results is sometimes lacking, it does set the scene for in-depth engagement with green chemistry in advanced studies.