Download this
A one-slide summary of this article with questions to use with your 14–16 students: rsc.li/3IaexTY

Oceans cover 70% of the Earth’s surface. But where they came from remains a mystery. Now a team of scientists has determined that the Sun is likely a significant source of that water based on analysis carried out on an ancient asteroid called Itokawa.

They found that solar wind – the stream of mostly hydrogen and helium ions that flow from the Sun – probably created water on the surface of dust grains brought to Earth on asteroids as the planet formed billions of years ago. 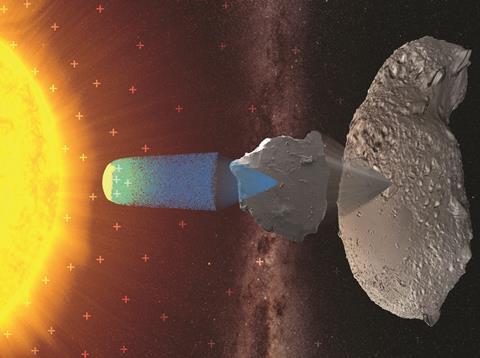 When hydrogen ions hit an airless surface like an asteroid or a spaceborne dust particle, they penetrate a few tens of nanometres below the surface and can affect the chemical composition of the rock. Over time this ‘space weathering’ effect can eject enough oxygen atoms from materials in the rock to create water.

This is one of the first studies to investigate space weathering using atom probe tomography, which enables precise 3D reconstructions of tiny samples. The researchers used the technique to image a thin hydrogen-enriched layer at the atomic scale that they recovered just below the surface of the S-type asteroid Itokawa. They precisely measured the ratio of hydrogen to its heavier isotope deuterium, and deduced that the hydrogen and deuterium had been fixed into the mineral by solar wind.

Based on what the team found on dust grains on Itokawa, they estimate that every cubic metre of asteroid should hold 20 litres of water.