Simon Cotton investigates a molecule that is making the news

Why is 2,4-dinitrophenol in the news?

A 28-year old man in High Wycombe, UK, is reported to have died after taking it.

Why did he take it?

It is thought he was taking it as a diet pill. 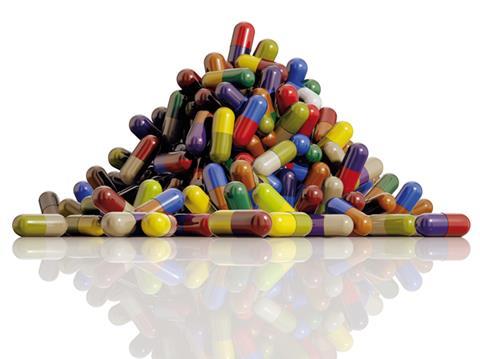 How does it work?

2,4-dintrophenol (DNP) helps to move protons across membranes in cells, resulting in a reduction in the production of ATP (adenosine triphosphate, the molecule that transports energy within cells). This means that much of the energy that is usually generated in respiration is instead wasted as heat (which can lead to fatal hyperthermia). The body compensates by increasing its metabolic rate in order to produce the energy needed to maintain the body. This increase in metabolic rate results in the consumption of fat.

How were its diet effects discovered?

Like some other organic nitrogen-containing compounds, DNP is an explosive. During the first world war it was noticed that factory workers who were filling shells with DNP lost weight (some fatalities were also observed).

By the 1930s it was clear that the weight loss was a result of DNP increasing the body's metabolic rate. It enjoyed a brief vogue in diet pills from 1933, until it was realised that there were dangerous side effects (including cataracts). Its use ceased at the end of 1938.

So why is there a problem now?

It is being advertised on the internet as a 'safe weight loss' drug. It is anything but.

One dieter claimed that they lost 20 pounds in 12 days by taking what would be regarded as verging on a lethal dose. People purchasing it on the internet do not get the warnings that they would receive if they were getting a medication from their doctor. Instead, they think 'if I double the dose I'll lose weight faster' and promptly move from a therapeutic dose to a lethal dose.

Essentially, DNP is too dangerous to be used. In 2003, the UK Food Standards Agency said that it was 'not fit for human consumption'. Consumption of 1 g in one dose could result in death.

What else is DNP used for?

It has several other uses apart from explosives, including as a pesticide and herbicide, as a wood preservative and for making dyes. 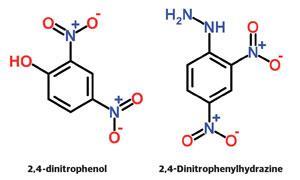 DNP is considered to be an important environmental contaminant by the United States Environmental Protection Agency. It can enter the air from car exhaust fumes and the burning of hazardous waste. It may be released into waste water by explosive and dye-manufacturing factories. DNP is broken down in soil by microorganisms.

Don't confuse it with 2,4-dinitrophenylhydrazine, the standard reagent used to test for the carbonyl group in aldehydes and ketones.