Even as a non-chemist, I’ve always been struck by how bad ‘chemicals’ are supposed to be for us, whether they maliciously crop up in food, farming, under the sink or in the air. Of course, since joining the Royal Society of Chemistry at the beginning of the year, I’ve rapidly learned that it’s not quite that simple.

Watching TV recently I was struck by two adverts, in the same commercial break, both from big German companies. One proudly announced ‘in our homes, there are no chemicals’, the other ‘we don’t just make chemicals, we create chemistry’.

So what’s in a word?

If you look for instances of the word ‘chemical’, it’s most commonly in the news in relation to sensational headlines about chemical weapons, chemical spills or substances that are corrosive, poisonous, toxic or have ended up somewhere they shouldn’t have.

Compare that fear and loathing with the much more positive sentiments for the word ‘chemistry’. Sports players who develop a deep partnership are described as ‘having great chemistry’.

An article on Yahoo News says this year’s crop of Strictly Come Dancing couples need to demonstrate ‘a special bond’ and that, in the weeks before the programme’s big Christmas finale, their ‘chemistry is going to be all important’.

It’s an odd dichotomy. Given, some chemicals can be dangerous if used incorrectly, but so can our cars, kitchen knives or even our supposedly ‘chemical-free’ steam cleaners.

Mentions of chemicals don’t tend to include life-saving cancer treatments, life-enabling painkillers or the incredible, innovative materials in the flat screen TV you’re watching those very ‘chemical-free’ adverts on. 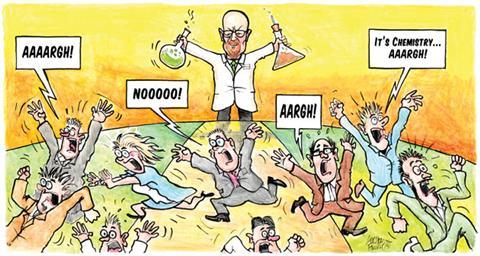 He thinks, partly because of the negative portrayal of chemicals, that the whole of chemistry has a tough gig. He says it gets a raw deal in comparison with biology, which has all of nature and David Attenborough; and physics, which has the entire universe, the Large Hadron Collider and is inevitably presented by everyone’s favourite scientist, Brian Cox.

Mark said: ‘The closest thing we’ve got to a celebrity chemist comes from the drama Breaking Bad, where Walter White, a chemistry teacher turned drug kingpin, uses his encyclopaedic chemistry knowledge to synthesise hard drugs, poison his enemies and dissolve the bodies of his victims.

‘He doesn’t really do much to combat chemophobia.’

So where do we go from here?

The company behind the advert about the we make chemistry message took a bold step, making a very public statement about the positive things the chemical sciences produce, so maybe combating chemophobia doesn’t need chemistry’s answer to Brian Cox?