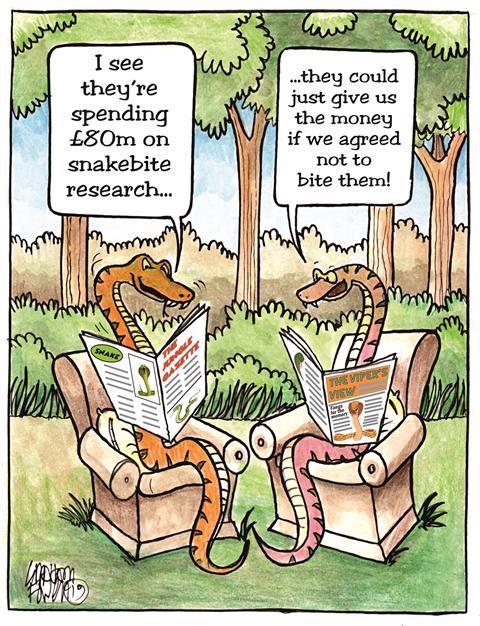 ‘Every five minutes, approximately 50 people are bitten by a snake, of whom 25 will be injected with venom, four will be permanently disabled and one will die,’ according to UK research charity the Wellcome Trust.

Just reading that makes my heart beat faster. My fear of snakes started in Canada as a PhD student, where a friend and I were presenting posters at a conference. We stayed on campus and walked back and forth along a very narrow lakeside footpath to the lecture hall. The loud rattles and movement of the snakes in the long grass either side petrified me every time.

More recently, we relocated our young family to the eastern US for a year where we spent much of our leisure time exploring the wilderness. There were many challenges overcome to be proud of that year, but the one I was most pleased of myself for was managing to not even see – or hear – a snake. Sad, but true.

To overcome fears, we are often told to rationalise them. The stats don’t help here. There are between 81,410 and 137,880 deaths and around three times as many amputations and other permanent disabilities from snakebites each year, the World Health Organization (WHO) has calculated.

The reason behind these shocking statistics isn’t the bites themselves. It’s poor healthcare in the aftermath. ‘With prompt access to well-made and well-selected antivenom, even those bitten by the deadliest snakes should have a good chance of recovery,’ states the Wellcome Trust website.

We don’t produce enough antivenom globally – less than half the amount we need. What we do manufacture is too expensive for the majority that need it (most deaths occur in low-income, rural communities in Africa, Asia and South America). And they can only be administered in healthcare settings thanks to potential side effects. We only have antivenom for 57% of the world’s species of venomous snake. In addition, purification failures and storage issues leading to contaminated or inactive batches are a frequent concern.

Both the WHO and the Wellcome Trust have recently announced that they are tackling these issues. The former unveiled a strategy to halve the numbers of deaths and cases of disability due to snakebites by 2030. Meanwhile, the latter has launched an £80 million research programme to ‘modernise antivenom production’ and ‘kick-start [the] development of new snakebite treatments’.

Today, we produce antivenoms by milking venomous snakes, injecting minuscule amounts of the venom into horses or sheep and then collecting the resulting antibodies generated from their blood. A process virtually unchanged since the 19th century. We hope that in the future, synthetic biology or other advanced tools may allow access to cheap, broad-spectrum antivenoms that are stable at room temperature for long periods of time.

This summer, my family will again be crossing the pond to spend a few weeks walking in mountains and remote forests in the Eastern US. Where, I predict, my husband will be repeatedly telling me that the snakes are more afraid of me than I am of them. Maybe – in a decade or two – I might finally be able to believe him!