Does it contain cocaine? 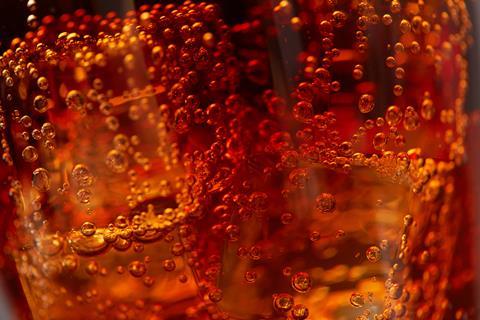 The formula for Coca-Cola is a closely-guarded secret

Originally it did. It was developed from a 19th century Italian tonic wine called Vin Mariani, made by mixing red wine with coca leaves. The dissolved cocaine gave the wine stimulant properties. An alcohol-free version was developed by John Pemberton, a former US Confederate soldier, in 1886 using coca leaves and cola nuts, which provided the stimulants cocaine and caffeine respectively. For the past century, however, the manufacturers have used coca leaves from which all the cocaine has already been extracted.

So what is in it?

The formula is a closely-guarded secret, but there's caffeine as a stimulant, caramel for colouring, vanilla and cinnamon for flavouring, and a host of other substances, including phosphoric acid.

How acidic is Coke?

Its pH is reported to be 2.6 to 2.7, mainly due to H3PO4, phosphoric acid. As a fizzy drink, it contains plenty of dissolved carbon dioxide, but this makes very little contribution to the acidity.

Will it dissolve nails?

That's an urban myth, though it will clean rust from steel nails; more reactive metals such as magnesium slowly dissolve in it, though.

Surely all that acid is bad for you?

Drinking sugary, fizzy drinks every day isn't necessarily a good plan, but recent research by Moses Elisaf and his colleagues at the University of Ioannina, Greece, has indicated that consuming large quantities creates problems, as blood potassium levels can drop dangerously low (hypokalaemia). An Australian ostrich farmer who drank 4-10 litres of cola a day needed emergency care for lung paralysis, whilst a pregnant woman who regularly drank up to three litres a day had an irregular heartbeat (both recovered).

When Mentos are dropped into fresh bottles of fizzy drinks - traditionally Diet Coke (but other fizzy drinks can be substituted) - a huge fountain is produced which is quite spectacular. The science of the reaction has been investigated by many people, and Tonya Shea Coffey of the Appalachian State University in North Carolina published a detailed study in the American Journal of Physics.

No chemical reaction is involved, the bubble formation is just due to CO2 undissolving from solution. The rough surface of the Mentos provides lots of tiny sites for bubbles to start forming, and the presence of aspartame sweetener and potassium benzoate preservative in Diet Coke, and gum arabic surfactant in the Mentos, help make bubble formation easier by reducing the contact angle. Still dangerous, mind you, if you don't get your head out of the way quickly!