Is it a wave or is it a particle? We might know the answer, (Spoiler alert: it’s both!) but it is reassuring nonetheless to see the pictures that prove it, says Nina Notman 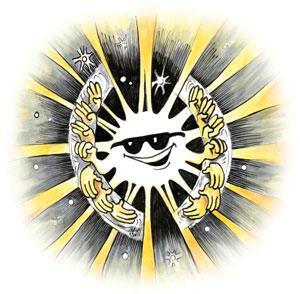 For over a century, it has been known that light can simultaneously behave as a wave and a particle, but, until now, no one has ever caught it in the act. Light has been observed many times spread out over a succession of crests and troughs in a wave-like manner and just as many times localised within a very tiny area, as if it were a particle. However, an image of it behaving in both forms simultaneously has proven elusive.

A team of researchers led by Fabrizio Carbone at the Swiss Federal Institute of Technology in Lausanne have now successfully photographed light’s dual behaviour using an ultrafast, energy-filtered, transmission electron microscope. Only two of these instruments exist in the world.

In the first step of the experiment, the researchers shone a pulse of laser light onto a tiny metallic wire. This added energy to the charged particles inside the wire, causing them to vibrate in the form of waves moving along the wire. Where the waves overlapped, they formed a ‘standing’ wave, so called because its position does not change over time, which is to say the wave appears to stand still. This standing wave provided another source of light: the researchers had, in essence, trapped the light in the wire.

In the second step, they shot a stream of electrons close to the wire – so close the electrons collided with the standing wave of light. The collisions between the electrons and photons resulted in discreet packets of energy – known as quanta – being exchanged between them. Using the ultrafast microscope, the team were able to photograph these exchanges, resulting in an image of the standing wave. The nature of the image is evidence of the wave-like nature of light. At the same time, the way in which that image was obtained was evidence that light is composed of particles. Without particles, the electrons would not have collided with the light and there would have been no exchanges of energy to observe. Thus, the team had achieved something that had seemed quite unlikely: photographing light simultaneously behaving as both a wave and a stream of particles. Their work was published in the journal Nature Communications.

You’d be forgiven for asking what practical application there could be for this fundamental observation of light’s dual personality, but the team says being able to image quantum phenomena at the nanoscale using their new approach may help smooth the path to viable quantum computers. Such computers, which harness atoms and molecules to carry information, are expected to be significantly speedier than today’s siliconbased devices.