Anti-doping agencies are constantly working to stay one step ahead of athletes who want to cheat by using drugs that enhance their performance.

Doping is nothing new; since the ancient Greeks humans are known to have tweaked diets and used herbal concoctions to boost athletic performance. But as drugs have become more sophisticated over the past century or so, their effectiveness – as well as the risks to the athlete’s heath – has increased. Today, doping is banned in most sports worldwide. 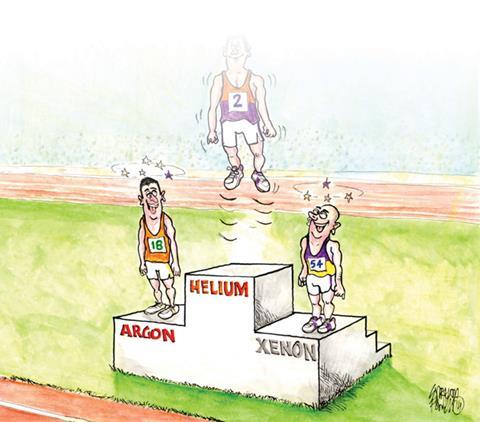 There are 32 global labs accredited by the World Anti-Doping Agency (Wada). They are filled with oodles of high tech analytical chemistry instruments able to detect minute traces of prohibited drugs in blood and urine. But as these techniques improve, unscrupulous athletes are just moving onto doping approaches not (yet) on Wada’s prohibited list.

Argon and xenon are both naturally present in the air. Argon makes up 0.9% of air, while xenon accounts for a minuscule one part per 10 million. They can be obtained by fractional distillation of liquid air and both have a handful of medical uses: argon is used in cryosurgery for treating cancer; xenon as an anaesthetic, for imaging lungs and for treating tissues starved from oxygen in heart attacks. Cheating athletes, however, mix them with oxygen and inhale them through a gas mask.

Once the ban, which came into force on 1 September, was announced, media attention turned to how these cheating athletes could be caught out – no accredited test for argon or xenon doping is available yet.

However there is a test in development. Gas chromatography mass spectrometry, a staple in Wada accredited laboratories, has previously been shown to be able to detect xenon in the blood plasma of patients who have received the gas as an anaesthetic. Work is ongoing to ensure this technique is robust enough for anti-doping testing.

In the meantime, Athlete Biological Passports will provide clues that blood doping has taken place. ‘Here we are not looking for the substance itself, we are looking at the effects of the substance on the body,’ explains Nick. A change in haemoglobin markers in the blood would be seen, for example.

Doping violations lead to bans ranging from a few months to a lifetime depending on the severity of the offence. But when the desire to win outweighs the desire to play fair this isn’t always enough to prevent doping. Fingers crossed one day analytical chemistry will be able to unearth every single cheat, allowing the spirit of sport to truly be protected.