Setting fire to a balloon filled with hydrogen gas is a guaranteed way to capture an audience’s attention. But it is the possibility of obtaining hydrogen in solid form that has been stealing the limelight recently.

Solid hydrogen was first predicted around 80 years ago. The theory goes that if you put hydrogen molecules under enough pressure they will solidify. During this process the hydrogen–hydrogen bonds will break and the molecules will fall apart into hydrogen atoms. It is believed the electrons in this solid will flow freely; meaning atomic hydrogen should behave like a metal and conduct electricity. Touted potential uses include as a rocket fuel and in supercomputers.

However, the solid form of hydrogen has so far proved elusive. Claims of success have been made, but later rebuffed. A mixture of molecular and atomic hydrogen layers – called Phase IV – has previously been observed at 2.3 million atmospheres and near room temperature. Now, Eugene Gregoryanz at the University of Edinburgh has produced another mixed form, Phase V, that has a higher proportion of the atomic hydrogen than Phase IV.  The team speculates this Phase V may be a step closer – a precursor even – to solid, atomic hydrogen. 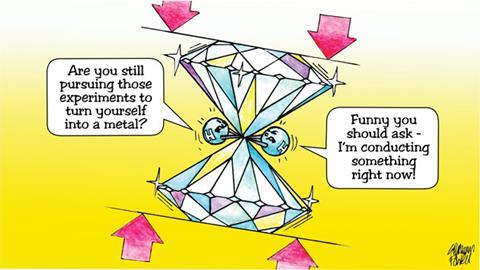 This work was carried out using a diamond anvil press, a typical piece of high-pressure-lab kit comprised of two opposing diamonds with their tips pointing inwards towards each other. Small amounts of material – in this case approximately 1µ3 of hydrogen gas – are placed between the tips and the diamonds pressed together with considerable force, crushing whatever is between them.

The team used micro-focused Raman spectroscopy to monitor the hydrogen as it was pressurised, finding evidence for the Phase V form at pressures in excess of 3.2 million atmospheres at near room temperature. This is one of the highest pressures ever achieved in a lab.

The team also observed this phase for hydrogen deuteride (HD) but not deuterium (D2) – they speculate that higher pressures again might be needed to turn D2 into its metallic form.

Aside from actually making metallic hydrogen there are many other hurdles to be jumped before any suggested applications could become a reality. Issues include scaling up production and ensuring the material retains its high-pressure form indefinitely once external forces are removed – and this is far from guaranteed.

Even in minuscule amounts, however, metallic hydrogen would be interesting largely to enable novel fundamental planetary research. The gas giants, such as Jupiter and Saturn, are widely believed to contain a liquid form of metallic hydrogen in their cores but this has never been proven. NASA currently has a spacecraft – Juno – hurtling towards Jupiter. Scheduled to arrive in July 2016, Juno is charged with probing the planet’s interior with the hope of establishing what is in there. And at the same time confirming that when put under pressure the lightest element of all behaves like a heavy metal.