An exposé by the New York Times has highlighted the impact some of the chemicals in nail care products might be having on the health of manicurists. The newspaper reports a high prevalence of respiratory disorders and skin complaints among these workers, as well as elevated rates of some types of cancers and low birth-weight babies. There are also cases of repeated miscarriages and abnormal child development, which the mothers interviewed have linked to their choice of job. Much of this is hearsay, however, as little solid scientific research has been done.

Nail varnishes and other manicure products can contain dozens of different chemicals to give the desired glossy look and longevity. Many of these are harmless, but the Environmental Protection Agency (EPA) – which oversees the protection of human health in the US – cite 20 of them as causing harm to human health. Three are of particular concern: dibutyl phthalate (a plasticiser that prevents nail polish becoming brittle, which is known to have adverse effects on animal foetuses); toluene (aids smooth polish application, but is known to have a toxic effect on the process of reproduction) and formaldehyde (a hardening agent, which is carcinogenic). 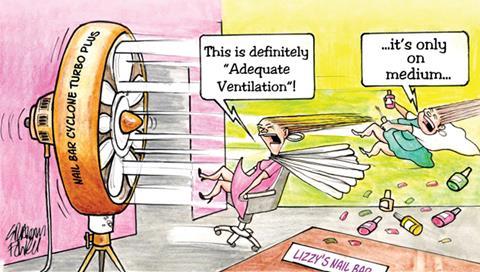 There are such small amounts of these chemicals in the products that the cosmetic industry claims their products are safe, and for the nail salon clients this is probably true. But the nail technicians are exposed to low levels of the chemicals throughout their working day, which adds up to much higher amounts.

The plight of EU manicurists is slightly different because dibutyl phthalate is banned from use in cosmetics, and formaldehyde will be banned from the start of 2016. However, the EU allows the use of methyl methacrylate – known to irritate eyes, skin and the respiratory track – which the US does not.

The problem lies not only with the contents of the products but also with the working environments. A lab worker using these chemicals would use a fume hood and gloves. But the focus of the nail industry is on aesthetics, meaning good ventilation and protective gear isn’t always a nail salon owner’s top priority. The exposé has had the desired effect in New York at least, with emergency measures being announced to crack down on unsafe working conditions in the nail salon industry within the state. Measures include requiring respirators and goggles to be worn by staff for certain tasks deemed high-risk, and gloves to be worn by staff throughout each manicure.

Time will tell how successful these measures are – it is not the first time this issue has been debated over the past decade or so – and whether it will cascade to other US states or other countries. Nail care is a booming industry globally, meaning that manicurist health is a growing problem. It is surely time for solid research to be done to help ensure these workers are safe in their place of work.