Girls depict female scientists less as they get older 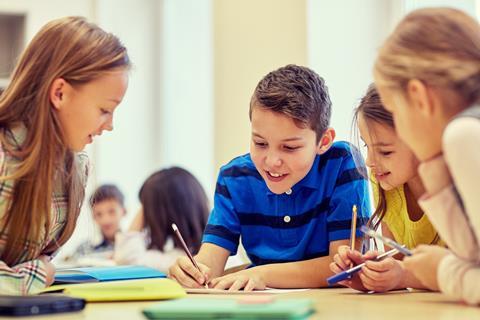 When asked to draw scientists, American children in the 1960s and 1970s almost never depicted women and girls – but since the 1980s, they have done so around 28% of the time. A new meta-analysis from Northwestern University researchers that combines results of 79 draw-a-scientist studies also indicates children learn the male scientist stereotype over time. Until the age of eight they’re equally as likely to draw men as women, but male scientist drawings become more common from older children.

David Miller, the study’s lead author, therefore recommends teachers and parents expose all children to examples ‘beyond the old dead white scientist usually presented in classrooms’. ‘I think both boys and girls need to see examples of scientists that they can identify with and see themselves as them potentially in the future,’ David tells Education in Chemistry.

The study builds on the original ‘Draw-A-Scientist’ paper, published in 1983. When asked to draw a scientist from 1966–1977, just 28 of 4807 children depicted women. The proportion of women studying science was greater than this, but far from equal – in 1966 women earned 19% of US chemistry bachelors’ degrees. But that has changed, with women earning 48% of US chemistry degrees in 2015. Similarly, an analysis of the magazine Highlights for Children found that 13% of its images of people contained women and girls in the 1960s, which rose to 44% by the 2000s. David wondered, given this shift in society, whether the images that American children drew had also changed in recent decades.

Thanks to the ease of draw-a-scientist studies, where scientists or teachers simply ask children to draw scientists and record the results, David had plenty of data. His initial searches provided over 3000 references. He combed through these studies for five years, until he found 79 sufficiently detailed data sets to analyse. They span data collected from 1966–2016 and include 20,860 children, from ages six to 18.

Across all of the data sets, American children drew 73% of scientists as male, changing from 99% from the 1966–1977 study to 72% in studies conducted since 1985. ‘This result likely reflects that children’s stereotypes associating science with men have weakened with time, consistent with more women becoming scientists and female scientists being more often depicted in children’s media,’ David says. However, other than the classic paper, all of the data sets came from 1985 and after – and there was a lot of variation between these later papers. The evidence for a continuing increase in children drawing female scientists over time is less clear within those later studies.

Children learn multiple stereotypes about scientists as they mature

David’s study also found American children tend to depict their own gender, which tallies with results from other research. Throughout the study’s five decades, boys often exclusively drew male scientists. However, girls shift their perception of scientists as they get older, drawing more female scientists at ten years old and more males at eleven.

This age is also when children pick up other scientific clichés, like drawing scientists with lab coats and eyeglasses. David says this suggests ‘children learn multiple stereotypes about scientists as they mature, not just those about gender’.

Stuart Ritchie, who studies human cognition’s relationship to age and education at the University of Edinburgh, says that this study is ‘strong evidence that children “notice” cultural things like how many male and female scientists there are’. ‘It’s obviously hard to pin down any cause of this observation, but the fact that such a straightforward test can be used as a kind of flag of cultural changes is a very useful fact to establish for future research on children’s stereotypes and perceptions of society.’

A great homework for ages 11–14, or even primary pupils, is to get them to draw a scientist. When collected in, discuss what stereotypes have arisen. Follow up with some display work showcasing the diversity of science and scientists beyond the famous men represented in textbooks. Students can turn scientist profiles into LEGO® minifigures.

Last year scientists took to Twitter to show the range of their work. The hashtag #reallivingscientist when combined with #dresslikeawoman brings up a wide range of female scientists. In addition, ‘Not all chemists wear white coats’, and ‘Faces of Chemistry’ are useful research resources.

Download a LEGO® minifigure handout for students to design their scientist profiles (MS Word or pdf).