John Emsley looks at an element that, despite first appearances, has some interesting applications

First isolated in 1808 by Humphry Davy, barium is a toxic metal with a few surprising uses, including preserving works of art.

Barium is remarkably abundant in the Earth’s crust at around 500 ppm, which makes it more abundant than carbon, sulfur or zinc. At any given time we have about 20 mg of barium in our body, which comes from plants like carrots and onions, but it has no role in our biological systems.

There are, however, some creatures that need barium. Large, single-cell algae known as desmids, of which Closterium is the most common, have fluid-filled cavities containing tiny crystals of barium sulfate, which they scavenge from water. What purpose the crystals serve is unclear, but one suggestion is that they use them as gravity sensors to orientate themselves. But barium is not an optional extra for these algae: desmids will not grow in the absence of barium. 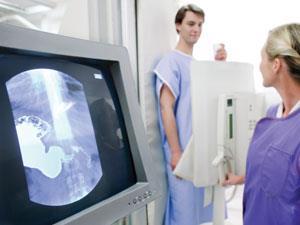 Barium can stimulate metabolism to the extent that it will cause the heart to beat erratically (known as ventricular fibrillation) and its soluble salts are dangerously toxic if ingested. The symptoms of barium poisoning are vomiting, colic, diarrhoea, tremors and paralysis.

Despite its toxicity to humans, barium compounds have been used in medicine for decades to monitor intestinal disorders with x-rays. The barium of a ‘barium meal’ is insoluble barium sulfate, which absorbs the x-rays, so its progress through the body can be monitored to show any abnormal constrictions due to cancerous growths.

Barium sulfate occurs naturally as the mineral barite, which was first investigated by a shoemaker who dabbled in alchemy, Vincenzo Casciarolo, who found some shiny pebbles near his home in Bologna, Italy, in the early 1600s. Heating these stones to redness bestowed upon them a rather curious property: they shone in the dark.

In the 1700s, Bologna stone, as the mineral became known, was investigated by Carl Wilhelm Scheele who realised it was the sulfate of an unknown element. But it was Humphry Davy who first isolated elemental barium by the electrolysis of molten barium hydroxide.

Barium metal itself has few uses, but compounds of barium have a wide range of applications. In particular, barium finds use in the brilliant white pigment known as lithopone, which is a mixture of barium sulfate and zinc sulfide. Unlike the zinc sulfide in the mixture, barium sulfate is particularly inert to UV light and so does not darken over time. Barium hydroxide, Ba(OH)2, is also a versatile compound used in the manufacture of oil and grease additives, in the refining of beet sugar, and in the manufacture of special types of glass.

Old frescoes have been preserved by spraying them with a solution of barium nitrate followed by a solution of ammonia. Together these form barium hydroxide, which fills the cracks and defects in the plaster. Over time the barium hydroxide is slowly converted to insoluble barium carbonate, protecting the fresco from decay.

The history of barium has taken the element from the mystery of glowing rocks to the mundane utility of white pigment. It’s fitting that another modern use of the element is much more dramatic: the vibrant colour of green fireworks is made by burning barium nitrate and barium chlorate.