Lustrous and silvery in appearance, bismuth is a rare element that has several quirky traits that combine to make it the least metal-like of all the metals.

As a pure metal, bismuth is brittle and has little use. Even so, its atypical nature is not all bad news. Under certain circumstances bismuth will behave like a semiconductor, for example in the thermoelectric material bismuth telluride. The semiconducting property of this compound means that it is used as a key component of many infrared detectors.

The alloy bisco – bismuth strontium calcium copper oxide – is a superconductor up to –164°C, a temperature much higher than most materials of this kind. High temperature superconductors have many unique applications. For example, superconducting tapes made from bisco are used in the Large Hadron Collider at CERN to supply electricity to the electromagnets that guide a beam of accelerated particles around a 27 km loop. 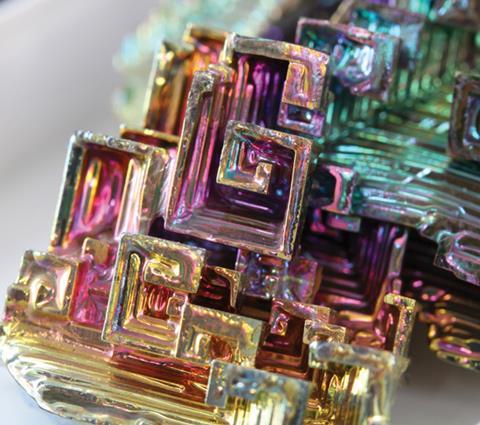 Compared to other metals, bismuth has a relatively low melting point, 271°C, and when it is alloyed with tin and lead, it melts at even lower temperatures. This characteristic opens up a range of interesting applications for bismuth-containing compounds. Bismuth alloys were once used in electric fuses as a way to interrupt high currents. When the fuse heated up, the bismuth-containing alloy would melt, breaking the circuit and saving a device from overheating. It is also becoming an increasingly important component of solder, replacing lead, which is currently being phased out because of its toxicity.

But Wood’s metal, an alloy of bismuth containing 12% cadmium, has a remarkably low melting point of 70°C. This makes it ideal for use in automatic fire sprinkler systems. When hot gases from a fire enter the head of the sprinkler, the melting metal releases a valve that allows water to gush out.

Through much of history, bismuth has been misidentified as either tin or lead, elements with which it shares similar physical properties. It was not until 1753 that French chemist Claude François Geoffroy proved that bismuth is a distinctly different metal to its more common cousins. Unfortunately, Claude François’ work was cut short by his untimely death in 1753, at the age of 24.

Though the metal was initially identified by European scientists, it is an element that can found throughout the world and has been used by many civilisations. In the 1500s, the Incas of South America were using bismuth in the form of a bronze alloy. A knife from this period has been found with a llama-head handle crafted from bronze containing 18% bismuth. The bronze in the blade contains no bismuth, only tin, which suggests that the handle was purposefully made to be a lighter colour.

For centuries, bismuth was synonymous with indigestion treatment. In the 1780s, doctors began to prescribe bismuth subnitrate, Bi(NO3)(OH)2, or ‘bismuth mixture’ to treat peptic ulcers. At the time, the source of the problem was not known, but it was agreed that bismuth could provide effective relief.

The mixture treats unpleasant symptoms in two ways. First, it interferes with the aggressive digestive enzyme pepsin, easing problems with indigestion. Next, it binds to the mucous coating of the stomach wall and protects it from attack.

Today, peptic ulcers are known to be caused by the bacterium Helicobacter pylori, an organism that can survive the stomach’s extremely acidic conditions and evade digestion by enzymes.

So if you suffer from peptic ulcers, while bismuth can offer some relief, you’re better off taking a course of antibiotics.