Manganese was used long before it was isolated as an element. The ore pyrolusite (manganese dioxide) was used 30,000 years ago as the black pigment in the cave paintings of Lascaux, France. The glassmakers of ancient Rome used it to neutralise the pale greenish tint of natural glass, caused by traces of iron. Today manganese is a key component of toughened steel. 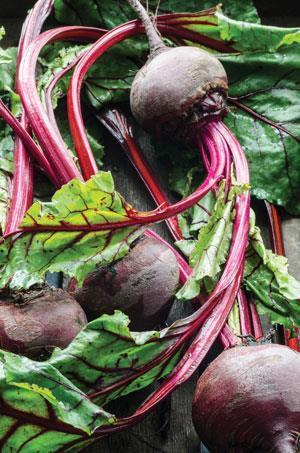 Living cells need manganese, and we have about 12 mg in our body. It is required by the enzymes that have a role in metabolising glucose, in the workings of vitamin B1, and in the operation of RNA. Manganese compounds are added to fertilisers and animal feedstuffs because it may be lacking in certain soils and it helps prevent grazing animals suffering from manganese deficiency.

For humans, the daily dietary intake of manganese is around 5 mg. Beetroot has one of the highest levels of manganese. It is also available in sunflower seeds, blueberries, olives, avocados, rice and tea, as well as the French delicacy, snails.

While Mn(II) may be the most common state of manganese, the biologically active form is Mn(III), although this is the least stable oxidation state of the element. Manganese occurs in minerals as Mn(IV), while the best known form is Mn(VII), as in potassium permanganate.

The most surprising occurrence of this metal is on the ocean floor where there is an estimated trillion tonnes (1012) of manganese-rich nodules scattered over large areas of the north-east Pacific Ocean. The nodules appear to have formed around sharks’ teeth, which are one of the few parts of living things that are capable of surviving the intense pressures at the bottom of the oceans. Mining the ocean floor for manganese may one day be required.

The microbe Deinococcus radiodurans has been discovered in meat subjected to intense radioactivity that should kill every living cell. It survives by accumulating manganese and using it to destroy the free radicals produced by ionising radiation. This makes it possible for its DNA repair mechanism to remain active.

The claim to have first separated the element was formerly believed to be held by the Swedish chemist Johan Gottlieb Gahn in 1774. However, a student at Vienna, Ignatius Kaim, had already described it in his thesis, written in 1771.

10 million tonnes of manganese ores are mined and smelted every year as pyrolusite or rhodochrosite (manganese carbonate). The main mining areas are China, South Africa and Australia. The metal is obtained either by the thermal reduction of the oxide using other metals such as sodium, magnesium, or aluminium, or by the electrolysis of manganese sulfate.

Manganese metal is not used as such because it is too brittle. 95% of mined manganese ore goes into alloys, mainly steel, which contains about 1% to improve its strength. Manganese steel contains around 13% manganese and was patented in 1883 by Robert Hadfield, a metallurgist from Sheffield, UK. It is extremely strong and is used for railway tracks, safes and prison bars. Adding 1.5% of manganese to aluminium improves its corrosion resistance and this is the type used for drinks cans.

KMnO4 was first made in 1740, by Johann Heinrich Pott, a glass technologist from Germany. It eventually found widespread use as a disinfectant for cleaning contaminated surfaces and bathing wounds. Gargling with it was recommended for halitosis and sore throats as it was an effective, if dangerous, antiseptic.

Manganese dioxide is added to protect rubber and is used as a catalyst in a variety of synthetic chemical reactions. Manganese oxide (MnO) goes into fertilisers and ceramics. KMnO4 is still used to remove organic impurities from waste gases and effluent water.